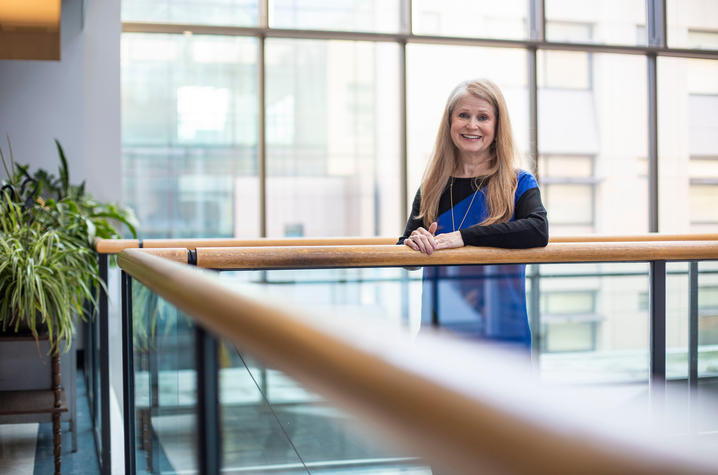 After discovering a lump in her breast, Phyllis Alexander immediately sought treatment despite the uncertainty of the pandemic. She became one of Markey's first patients to choose Microseed radiation treatment for her cancer. Pete Comparoni | UK Photo

LEXINGTON, Ky. (March 22, 2021) – While Kentucky was dealing with the early days of the COVID-19 shutdown a year ago, Lexington resident Phyllis Alexander woke up one morning and accidentally discovered another frightening problem.

While reaching for her robe in her closet, she turned too quickly, knocking her chest hard against the door. The pain was sharp and immediate, and as she touched her left breast, she noticed something unusual – a large, firm bump.

“I had always expected a lump to feel like a BB,” Alexander said. “But this was just a big lump that felt more like a muscle knot.”

Alexander immediately called Dr. Clarissa Beiting, her gynecologist at Lexington Clinic. Despite medical centers across Kentucky shutting down and pausing services, she knew she shouldn’t wait to get it checked out.

“I called and said, ‘I know this is not good timing,’ because COVID-19 had just blown up,” Alexander said. “But I said that I had a lump and thought I needed to come in. And she said, ‘Yes, you do.’”

Alexander underwent a series of tests, including a mammogram, ultrasound, biopsy and an MRI. She was diagnosed with breast cancer and was referred to hematologist/oncologist Dr. Susan Liddle with the Markey Cancer Center at Lexington Clinic. The fact that Alexander sought treatment so quickly was hugely beneficial for her care, says Liddle, who stresses the importance of regular mammograms for this reason.

“Early detection of breast cancer can make such a difference in treatment options and outcomes for patients,” Liddle said. “And the best way to find breast cancer at an early stage is with regular mammogram screenings. Mammograms can often find breast changes that could be cancer years before symptoms develop. Finding cancer in its earliest stages means more treatment options, a better chance for survival and improved quality of life.”

For her surgery, Alexander called UK Markey Cancer Center surgical oncologist Dr. Pat McGrath, who had been a longtime friend of her family.

“I’ve known Pat McGrath for a number of years, and I trust him and feel comfortable with him,” Alexander said. “When I met with him, he told me that it was small, it was early, it was treatable. All the right things.”

In August, McGrath performed a lumpectomy, a surgery that removes cancerous tissue while preserving as much breast tissue as possible. Though Alexander was able to forgo chemotherapy, she would need follow-up radiation therapy to ensure that all the cancer cells were gone. McGrath referred her to Dr. Mark Bernard, a radiation oncologist with the UK Markey Cancer Center.

Last year, the UK Markey Cancer Center became the first medical facility in Kentucky and one of the few nationally to offer Concure Oncology’s Microseed radiation therapy for patients with early-stage breast cancer.

“One of the many benefits of this procedure is that it treats only the breast tissue most at risk for local recurrence,” Bernard said. “That greatly reduces the risk of radiation dose to the heart and lungs as compared to conventional treatment.”

Already widely used to successfully treat prostate cancer, radiation with implanted radiation seeds significantly reduces the number of times a patient has to come in for treatment – Concure’s Breast Microseed Treatment is a one-time procedure. This made the option more appealing to Alexander. In addition to concerns over exposure to COVID-19, she and her husband are caregivers for their son, and she didn’t want to leave him alone daily for long stretches of time while getting her treatment.

“I’ve had women tell me that traditional radiation treatment is easy, to just go ahead and do it,” Alexander said. “But I liked the idea of going in one time and getting it done.”

“It’s appealing because it’s a short procedure, and it limits the amount of time you have to spend in a hospital,” Bernard said. “It gives you back that time to spend with your family and friends.”

In October, Bernard implanted 117 tiny radiation seeds in the tissue surrounding Alexander’s tumor bed. The seeds have a half-life of 17 days, meaning they deliver half the dose of radiation in that time period with rapid decay afterwards. After roughly 90 days, the seeds become nearly inert. The radiation itself only travels a short distance, meaning the radiation risk to others is practically nonexistent. However, Concure Oncology provides a small breast shield that patients can wear for peace of mind.

With her one-time radiation treatment behind her, Alexander could return to her everyday activities. In the first few months, she experienced a little tenderness and skin irritation in the skin overlying the seeds, which cleared up quickly with a simple treatment.

Because of her strong family history of cancer, Alexander underwent genetic testing to determine if she carried a BRCA gene mutation, which came back negative. Now with surgery and radiation behind her, she will continue follow-up appointments with her cancer physicians to closely monitor for any signs of cancer recurrence.

Noting that her cancer experience was relatively easy to handle compared to many other patients, Alexander says she’s thankful for all the members of her health care team who went the extra mile to make sure she felt taken care of, especially during the uncertainty of the ongoing pandemic.

“One of the nurses at Lexington Clinic would stay past her time and call me as soon as she got a report,” Alexander said. “I was really appreciative of the effort they made, and of everyone in Dr. McGrath’s and Dr. Bernard’s offices. It was just a crazy time, but they’ve all been really kind and good to me.”