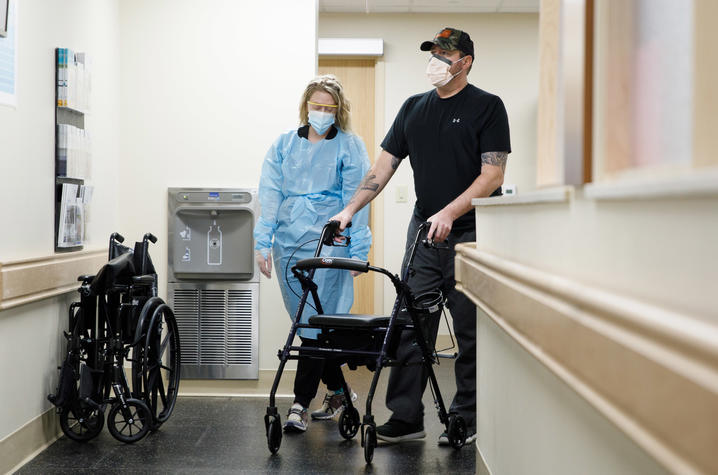 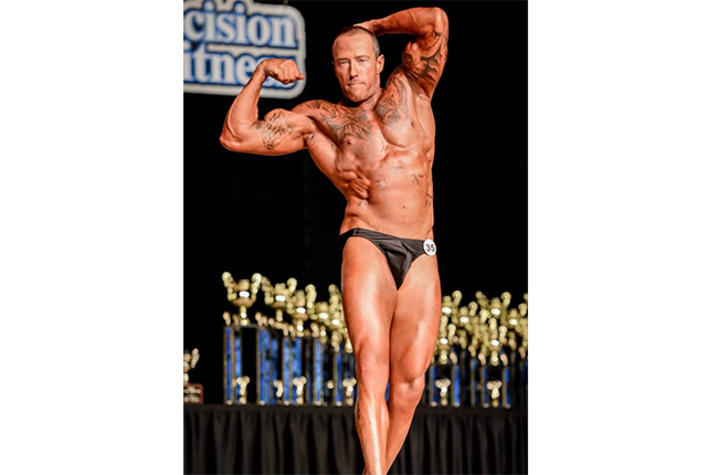 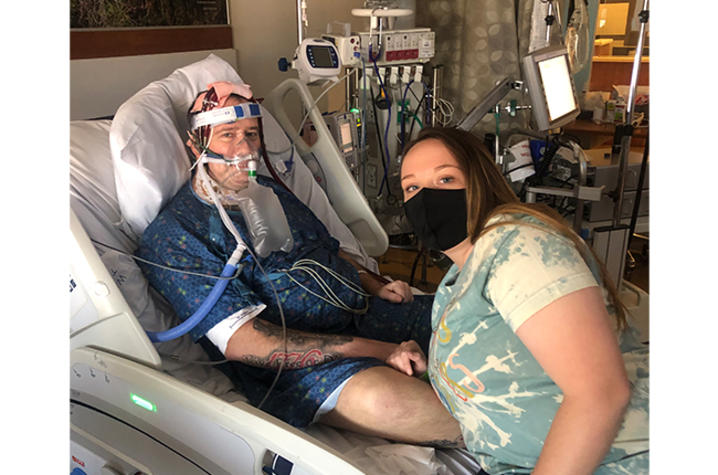 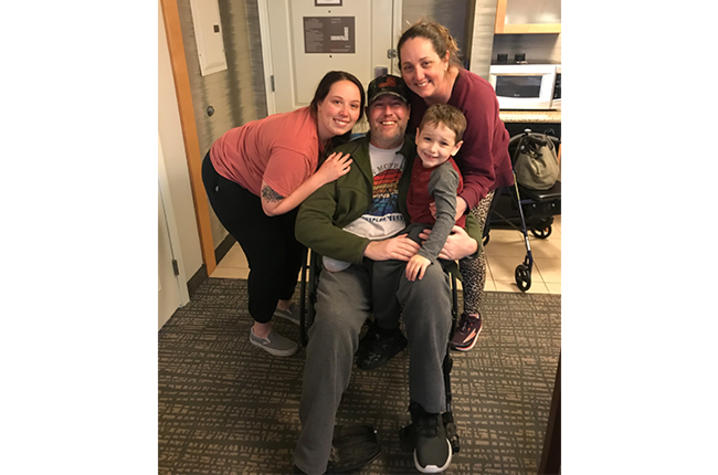 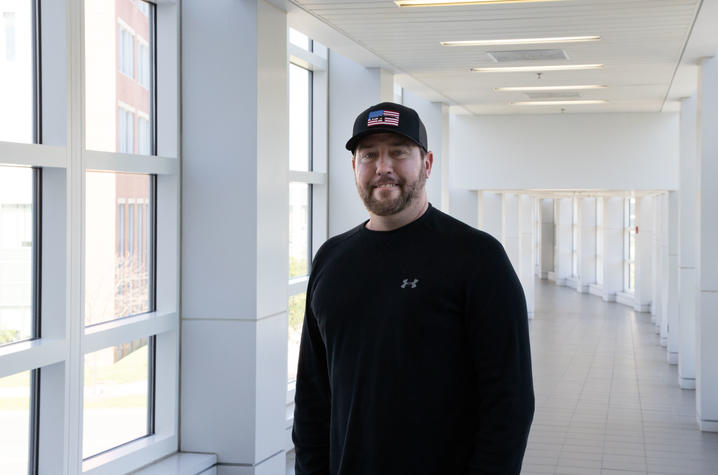 LEXINGTON, Ky. (June 3, 2021) ­— It seemed like nothing at first. Dave Hoover thought he had a sinus infection.

“I had a lot of pressure behind my eyes and in my sinus cavities,” he said. “I started feeling worse on my way home from work and stopped by the immediate care clinic to be seen. They tested me for COVID.”

The test was positive.

That was Jan. 26, 2021. A week later, Dave’s health took a drastic turn for the worse and he was admitted to his local hospital with bilateral COVID pneumonia.

When the COVID-19 pandemic hit the United States last year, it was thought that only older people or those with pre-existing conditions were at risk. But it proved to be indiscriminate, and more and more healthy people contracted the disease.

Dave was, by all metrics, in perfect health. As an amateur bodybuilder, he worked out five days a week and followed a strict diet. After his son was born, he eased off from the gym, but still got plenty of exercise clearing the land on the farm he and his wife Emily bought in Stanford. They had just finished building their house and were looking forward to working the land in nicer weather when Dave got sick.

But after weeks in the hospital, his health continued to decline.

“Despite all the medications and treatment, my body wasn’t really responding,” said Dave. “Even though I had completed the treatment, I was requiring so much oxygen and couldn’t get weaned down. Once they decided I needed more care than they could provide, I was quickly transferred. It saved my life.”

On Feb. 25, roughly a month after he was first admitted to his local hospital, Dave was transferred to UK HealthCare and thus began what Emily calls “the most exhaustive week of our lives.” He was no longer COVID-19 positive, but the damage to his lungs was severe and irreversible.

“The night Dave was transferred to UK, I got a call from the physician while on my way there, saying that Dave was declining and they couldn’t wait any longer to intubate him,” said Emily. “I had a real fear that the conversation I had with him before transport would be the last time I talked to him.”

At UK, Dave was intubated upon arrival. He was later placed on veno-venous extracorporeal membrane oxygenation, or VV-ECMO, a machine that pumps blood outside the body to a heart-lung machine. It removes carbon dioxide and sends oxygen-filled blood back to the lungs which helps improve the oxygenation to the tissues. This allowed the transplant team to remove him from ventilator support and allowed them to stop sedation so Dave could be more mobile.

Dave’s only hope was a double lung transplant. The ECMO machine and high oxygen delivered via a nasal cannula kept Dave alive as he waited for the gift of life. He was quickly put on the transplant list, and for the first time, he felt relief.

“It gave me a sense of hope that I might recover and see my kids and family again,” he said.

While patients on the lung transplant list wait for their new lungs, it’s important that they retain as much strength and fitness as possible. Dave took daily walks around the intensive care unit (ICU), surrounded by hospital staff with the ECMO machine in tow.

“Walking on ECMO was the hardest thing I’ve ever done,” Dave said. “I felt like I was drowning the whole time. But the physical therapy team is so motivating and encouraging, and I knew I had to do it. I knew this was the way to keep my strength so I could be in good shape going into transplant.”

Even though Dave was only on the waiting list for a few weeks, Emily worried. As a nurse, she’s more attuned to the challenges Dave faced. His breathing was getting worse. Emily recalls the conversations she had with Dr. Maher Baz, medical director of the lung transplant division of the UK Transplant Center.

“I remember telling Dr. Baz that Dave is the strongest man I know,” Emily said. “I felt certain that if anyone could survive and thrive after the transplant, it would be him. As much as I wanted and needed him to be a transplant candidate, I knew that there was still the possibility that he wouldn’t be. The doctors were upfront about that, and that was a hard thing to hear.

“I wondered about the lungs that were being offered that the transplant team passed on,” she continued. “But they weren’t the right ones for Dave. He was declining — mentally and physically — and the staff could see it too. We really needed something to happen soon.”

Patients can’t stay on ECMO indefinitely. By the time Dave and Emily were informed that the transplant team had found a perfect match — on Easter Sunday — Dave had been on ECMO for 33 days.

Dave went into the operating room that night. The surgery was performed by UK Cardiothoracic Surgeon and Surgical Director of Lung Transplantation Dr. Suresh Keshavamurthy, his anesthesiologist was Dr. Sanjay Dwarakanath and the donor lungs were procured by Dr. Rajasekhar Malyala. It took several hours to remove Dave’s diseased and non-functional lungs and implant the new and fully functional donor lungs while he was supported on ECMO. The surgical team even took great pains to preserve the appearance of Dave’s chest tattoos.

“When I close my eyes, I can still see that first breath Dave took into those new lungs off of the ventilator,” Emily said. “It still leaves me speechless.”

Dave is the first person in Kentucky and among a few in the country to have a double lung transplant after contracting COVID-19. He donated his lungs to UK so researchers can study the virus and the devastating effects it can wreak on lungs.

Dave was discharged 19 days after his transplant on April 23 — three months after he was admitted to the hospital.

He and Emily are both deeply grateful for the care they got at UK HealthCare, and for the support they received from their family, friends, employers and the community.

“Our experience at UK has been phenomenal,” Dave said. “Being in the hospital so long comes with relationships that you build over that time. They are invested in your success.”

“We are so blessed to have an amazing family,” Emily said. “Our community is small and we’ve both been at our employers for many years. They have all rallied behind us and given to us in ways that we will never be able to repay.”

Five weeks after his transplant, Dave and Emily celebrated their 20th wedding anniversary. But instead of a trip to the Florida Keys, they were in the transplant clinic for his five-week post-op follow-up with Dr. Baz.

His nurse, Maria, assured him that traveling was in his future.

“As long as I can get in the ocean,” Dave replied.

Throughout the clinic, Dave was turning heads.

The nurses and clinic staff were amazed at his progress. A fellow double-lung transplant patient he met in the waiting room couldn’t believe he was only five weeks out from his surgery.

“It’s a road,” the man said; he had his surgery four years ago. “But you look good.”

During his examination, he and Emily went over the lengthy list of medications with the pharmacist. Dave described to Dr. Baz the pains he felt in his chest.

That’s normal, Dr. Baz assured him. After all, his surgeon had to break multiple ribs to access his lungs.

One post-surgery complication no one could anticipate — seasonal allergies.

“When I went in the hospital, it was winter,” Dave said. “I came out and there’s a half an inch of pollen on everything.”

The pharmacist adds allergy pills to his three-page list of medications.

The Hoovers describe to Dr. Baz the COVID-19 protocols they enforce at home. If an unvaccinated person comes to visit, they have to stay in their car and Dave will talk to them from the porch. They’re both working hard to convince everyone they know to vaccinate.

“I tell people, get your vaccine,” said Emily. “You do not want to go through this. If you don’t get it for yourself, then get it for the ones that you love. It is our only chance at getting back to a normal life.”

The Hoovers don’t know anything about Dave’s donor, but they are writing a letter to their family letting them know how much they appreciate the gift.

“I’m so grateful for my donor,” Dave said. “My story isn’t possible without them. I’ve been an organ donor for years. I wish everyone would sign up.”

But for now, Dave is basking in every moment with his wife and their two children. He’s still taking it one day at a time, but he’s looking forward to driving again and working on the farm.

“We have definitely slowed down,” Emily said. “We have always appreciated everything we have been blessed with, but going through something like this changes you. Dave was healthy before COVID. I have hope that Dave will walk our daughter down the aisle one day and that he will be able to coach our son in little league sports. I am eternally grateful for their gift of life.

“Dave and his family have been very brave, motivated and committed—which helped get them through the waiting time and surgery,” said Dr. Baz. “But this case should also serve as a reminder for our citizens to get vaccinated. This pandemic is not quite over as we are still seeing severe lung damage almost exclusively in unvaccinated patients. It also should serve as a call and gratitude for organ donation and organ donors.”

Dave feels grateful to his nurses, doctors, physical and respiratory therapists and all the hospital staff who cared for him, but he knows there was a higher power at work.

“God provided modern medicine the path for all the amazing advancements,” Dave said. “God provided the surgeons with wisdom, courage, and steady hands to perform the transplant. God provided the other medical staff with the skill set needed for my successful outcome and a caring heart for those in need. God provided me with an angel donor and the miracle of life.”