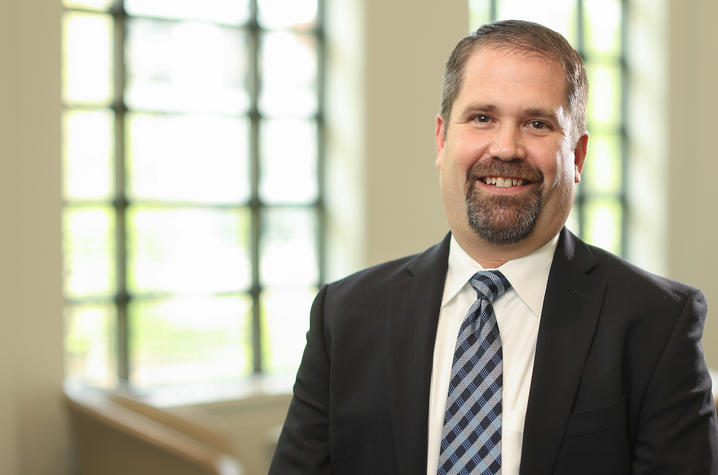 LEXINGTON, Ky. (July 22, 2022) — David Fardo, Ph.D., a professor of biostatistics and the inaugural Stephen W. Wyatt Endowed Professor in the University of Kentucky College of Public Health, is one of 14 University Research Professors for 2022-23. The University Research Professorship Awards honor faculty members who have demonstrated excellence that addresses scientific, social, cultural and economic challenges in our region and around the world.

College leadership develop criteria for excellence within their area of expertise and then nominate faculty who excelled at these criteria. Each University Research Professor receives a one-year award of $10,000.

“It’s unbelievable, really,” said Fardo when asked how this achievement feels. “It’s an honor to be named alongside such esteemed mentors and colleagues. Throughout my time at UK, I’ve been blessed with amazing mentors, collaborators, students and friends. The award is guilt by association.”

Fardo first worked in human resources consulting in Chicago. Growing up with a father in academia instilled a love of teaching in him and caused him to leave his position. From there he joined a statistics doctorate program and eventually become a professor.

When he joined the UK faculty in 2008, Fardo didn’t have a particular disease area of interest. This allowed him to work with folks across many UK Colleges, including Agriculture, Food and Environment, Arts and Sciences, Dentistry, Medicine, Pharmacy and Public Health. He also collaborated with the Sanders-Brown Center on Aging to study Alzheimer’s disease and related dementias (ADRD), which is now where he spends a considerable amount of research time.

“We are working hard to discover the biological mechanisms driving dementia-related brain neuropathologies and prevent or impede them for better brain health,” said Fardo.

Fardo is currently the principal investigator of two awards from the National Institute on Aging (NIA), researching genetic risk factors contributing to various neuropathological endophenotypes and multiple neurodegenerative diseases. His currently funded collaborative work ranges from therapeutic targeting of the genes TREM2 and SHIP1 for Alzheimer’s disease to investigating novel pathogenetic mechanisms for hippocampal sclerosis and risk factors for conversion to mixed dementias.