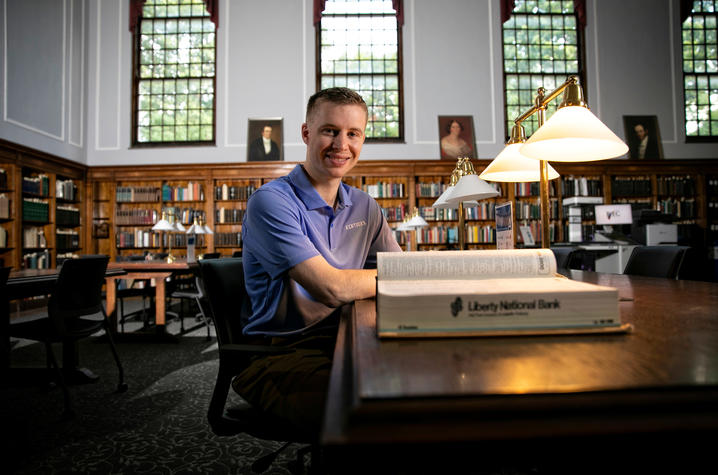 True to his aim, Fortenbery has been named one of four U.S. Supreme Court Fellows for the 2019-2020 term. Mark Cornelison | UK Photo.

LEXINGTON, Ky. (July 18, 2019) — In 2017, Seth Fortenbery was completing his third year of law school at the University of Kentucky. With the pressure of graduation mounting, not everyone was eyeing a fellowship aimed, not only at recent law school graduates, but also mid-career professionals. But Fortenbery had already set a plan in motion — an ambitious plan for his future.

That February, Chief Justice John Roberts visited the UK College of Law as part of the newly established John G. Heyburn II Initiative. During a session hosted by the counselor to the chief justice, Fortenbery learned about the Supreme Court Fellows Program — a rare opportunity for young professionals to broaden their understanding of the judicial system through exposure to federal court administration.

A fellowship with the Supreme Court of the United States — "the Highest Court in the Land" — certainly stood out.

Later that year, Fortenbery graduated from UK Law and went on to spend the next two years serving as a law clerk, most recently for Sixth Circuit Judge Eugene E. Siler Jr. of the United States Court of Appeals. Fortenbery's duties include assisting the judge throughout the legal process.

"The Sixth Circuit is an appellate court that hears appeals from federal district courts in Michigan, Ohio, Kentucky and Tennessee," he explained. "Most of my time is spent reading legal briefs submitted by the parties to a case and researching the legal questions presented by the parties’ appeal." Prior to working at the Sixth Circuit, Fortenbery clerked for U.S. District Judge Karen K. Caldwell for the Eastern District of Kentucky, who is also a graduate of the UK College of Law.

Starting this fall, the Murray, Kentucky native is taking on a new role.

True to his aim, Fortenbery has been named one of four U.S. Supreme Court Fellows for the 2019-2020 term. "I was extremely excited to get the news," he said. "It is a great honor to have been selected."

The fellowships date back to 1973, when former Chief Justice Warren Burger created the program to allow diverse professionals to study the administrative workings of the federal judiciary firsthand.

Nearly 50 years later, the Supreme Court Fellows Commission continues to choose talented individuals to work for one of four federal judiciary agencies during a yearlong appointment in Washington, D.C.:

In the words of Chief Justice John G. Roberts Jr., the program offers “a unique opportunity for exceptional individuals to contribute to the administration of justice at the national level.”

Fortenbery has been assigned to the Federal Judicial Center, the education and research agency for the federal judiciary. "It provides orientation and continuing education for all federal judges, and management and supervisory education for court staff," he explained. "As a fellow, I will support the center’s research and educational activities, including its international training program."

While his passion for the practice of law is undeniable, Fortenbery was uncertain about which career path to pursue during his undergraduate years. In 2013, he graduated from UK with honors and earned a bachelor's degree in English and philosophy. Though Fortenbery ultimately decided law school was a logical next step, it was the willingness and expertise of his mentors who instilled the confidence he needed to succeed.

He found many of these mentors at UK Law, one being Professor Allison Connelly. "Throughout Professor Connelly's career, she has been a tenacious and effective advocate. A significant number of attorneys in Kentucky and beyond, no doubt, owe their litigation prowess to her."

“Seth’s selection to the fellows program is a remarkable example as to how the Heyburn Initiative is benefiting UK Law students and providing them with opportunities to engage with some of our nation’s top leaders in law,” David A. Brennen, dean at UK Law, said.

Now, Fortenbery will take his education and experience on this new endeavor. "The Fellows Program offers an opportunity to observe administration of justice at the highest level and time to pursue important legal research. I hope to finish the program having learned a great deal from both."