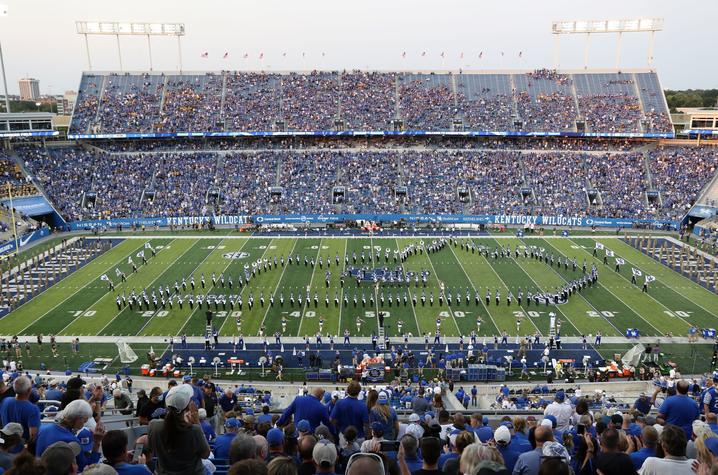 LEXINGTON, Ky. (Sept. 26, 2022) — Nothing beats a cool fall Saturday in the Bluegrass when University of Kentucky football fans gather at Kroger Field to cheer on their beloved Wildcats. Anticipation and excitement build as fans blend into the colorful landscape of Kentucky blue and vibrant turf green. From the Catwalk, the rhythmic beat of a drumline creates an unmistakable pulse as feet, arms and instruments move in unison. Voices swell as players and cheerleaders rush onto the field. The cheers reach a spine-tingling crescendo as the Wildcat Marching Band (WMB) starts to play the opening notes of UK's fight song. It's game day in Kentucky and the entire experience isn't complete until the marching band makes its first appearance on the field for the halftime show.

“The marching band is very much a part of the game day atmosphere, for the band, for the fans, for the players, and for the Big Blue Nation. If you take the UK marching band out of that equation, it will leave a huge hole and a loss of energy and excitement in the stadium,” said John Cody Birdwell, D.M.A., director of Bands at UK. “The band brings a lot of energy to the field as well as in the stands, and they’re well connected to the cheer team and to the dance team. Everyone works together to keep the energy going from before kickoff until after the game.”’

The students in the band represent the largest, most visible student organization on campus, 230 members large who are giving everything they have to the university.

Sara Mays, a fourth-year drum major and arts administration student from Cecilia, Kentucky, is one of the 230 giving her all.

“I love the instant gratification of putting on the uniform on game day and then performing for thousands of diehard Kentucky fans and watching them sing and dance along with our performances,” Mays said. “I also love all of the unwritten traditions that only the band knows and that continue to get passed down even though we have no idea where they originally came from, but we still scream them to the top of our lungs.”

Shayna Stahl, D.M.A., now in her second year as the first female director of Athletic Bands, says there is an incredible amount of school pride at UK, that in her experience, is not always seen at every school.

“Saturday and game day is almost like a holiday here. Everybody is all about the game, tailgating and other events. When I chose to come to UK, it wasn’t just about the passion of the students, but it was also the commitment to the Big Blue Nation from the community that is just as involved as the students,” she said. “The most rewarding part of my job is to work with students who are so enthusiastic about music, the marching band and UK in general.”

The WMB enjoys a national reputation as one of the finest collegiate marching bands in the country. A pep band travels to every away game in the Southeastern Conference and the full band travels to one away game each year. In addition, the WMB has participated in numerous post-season bowl games, Bands of America Regional Championships, one Presidential Inauguration, a World Series, and the 2008 Ryder Cup.

“Several years ago, the Wildcat Marching Band was declared ‘One of the Top Bands in the South’ by Southern Living magazine,” Birdwell said.

The WMB, an integral part of the School of Music at the UK College of Fine Arts, has a rich history that dates back to near the turn of the century. In its infancy, UK was modeled after a military band with military style uniforms, which was commonplace for college marching bands at the time. In 1903, Capt. George Byroade, commandant of UK’s Military Science Department, appointed a Professor Rucker as band director, creating the first official marching band at UK. As the band evolved over the decades, the band became known as the “Marching 100,” a tradition that lasted through the 1950s and early 1960s.

Birdwell says that the changes in the WMB over the years that people might notice most are for one, changes in uniforms that sometimes occur with each new director, and secondly, a change in music to reflect current trends.

An important piece of UK’s marching band history is William Harry Clarke, associate professor emeritus at the UK School of Music, and longest living band director to date. While Clarke was at UK working on his doctorate, he was asked to become the interim director of Bands in 1968 to restore its dwindling numbers and reputation.

“Upon accepting the one-year position, I checked the roster in the summer of 1968 and noticed only 30 new people had signed up for marching band,” Clarke said. “The band was all male which was very traditional in the Big 10 Conference at that time. I felt that wasn’t right and recruited females to the band, including majorettes and flag bearers. There were 120 members in the band that fall. Two or three years later, the roster grew to 200 and later maxed out at 300.” Rather than the one-year assignment, Clarke’s position with the band spanned 21 years of his 43-year tenure in the UK School of Music.

Clarke made many significant contributions to the WMB during his tenure that remain in place today. In addition to dramatically increasing the size of the band and including females, he was given band assistants at a time when none existed. Under Clarke's mentorship, three inexperienced young trainees went on to become band directors for University of California, Los Angeles, Florida State University and University of Arkansas. Clarke also led the way during the 1970s to the band into a Drum Corp style at a time when drum corps started making a strong showing among collegiate bands.

“The band was very traditional when I arrived and I was into marching band drill,” Clarke said. “Drum Corp is a more complex drill and there is more freedom in how formations come together and there’s more crowd engagement.”

Although Clarke retired in o2011 after 43 years at UK, his presence is still felt to this day and not just because you might spot him in the stands. The moment you hear some of the most recognizable music in the Bluegrass, such as “On, On U of K,” (written by Carl Lampert in the 1920s), you are listening to music heavily influenced by Clarke which is no doubt a cornerstone of UK’s marching band history. Clarke found another song called “Kentucky Fight,” (composer unknown) that he had arranged for the band. The band uses it as a second fight song.

Today, the Wildcat Marching Band is made up of over 230 members which come from all over campus representing many different majors including sciences, education, agriculture, engineering, as well as music.

“It’s a great mix of people from all walks of life and backgrounds, and they become a family that represent what this university is about,” Birdwell said. “Though not all are music majors, they’ve played instruments and played in high school bands before coming to UK, and they want to keep that going because it is such an important part of their lives.”

Caleb Hamlyn, a fourth-year music education student and current drum major from Lexington, says there is a powerful sense of community within the band that shows throughout UK’s colleges, the university and the city as a whole.

"The Wildcat Marching Band has given me a support system not only within my college, but as well as my life in general," Hamlyn said. "Although we do have a lot of fun, we also care about each other deeply and want to keep each other accountable to ensure that we all succeed."

Clarke says that having a great band is dependent on the ability to recruit the finest musicians.

“Dr. Stahl is doing an excellent job recruiting and will make great improvements,” he said. “The future of the Wildcat Marching Band is bright!”

Being a music major is not a requirement to be in the band. Stahl says that as long as the student can play an instrument, she can teach them how to march.

“The marching band is a great community for the band members to be involved in, one that is inspiring in terms of quality of music, marching and overall performance. It takes being good at entertaining the crowd and keeping them involved in wanting to sit and watch the band perform,” she said.

UK students who want to join the Wildcat Marching Band do so knowing they are making a sizable time commitment to their love of music and entertaining. Although there are no traditional classroom lectures, there are multiple weekly practices. Game day starts five hours prior to kick-off for rehearsals.

Mays says that being in the Wildcat Marching Band has given her many lasting memories and relationships but feels it has also promoted her success as a UK  student.

“Knowing that if I do not do well in my classes means that I can’t do marching band, which kind of pushes me to do even better,” she said. “Marching band also creates a sense of time management, determination, people skills and so many other fantastic personal traits that contribute to my daily life both as a student and in my classes.”

When Mays came to UK from a small town in Kentucky, she felt overwhelmed but found a safe place with the WMB.

“When I walk onto the field, I know that I am where I belong and I know that the people around me are the ones that care about me the most,” she said.

Will Baumann, alto saxophone, from Lexington

Will Lucky, trumpet, from Cynthiana, Kentucky