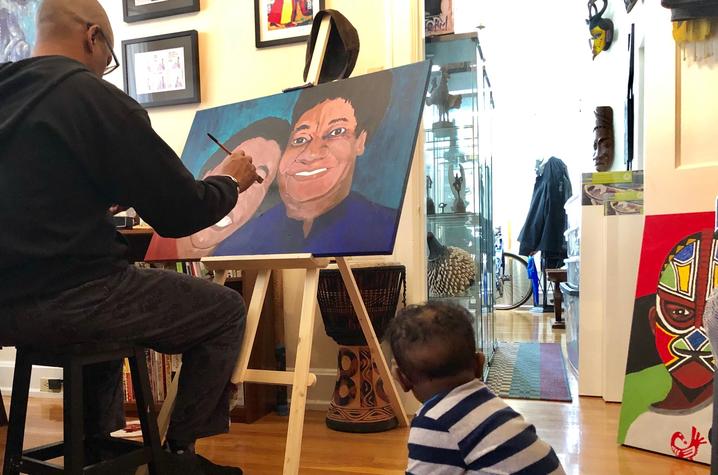 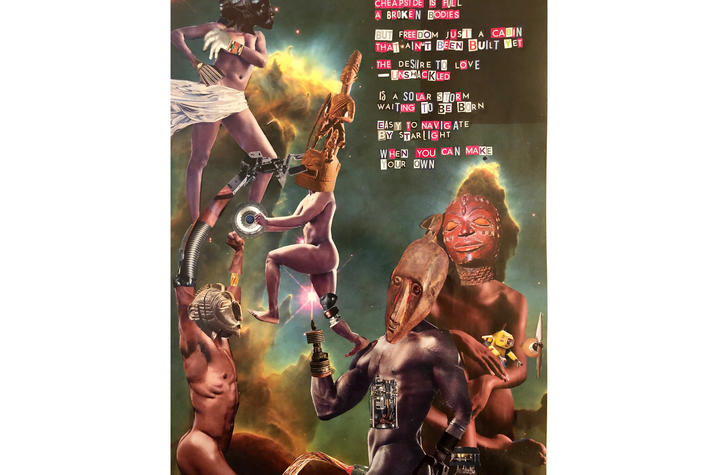 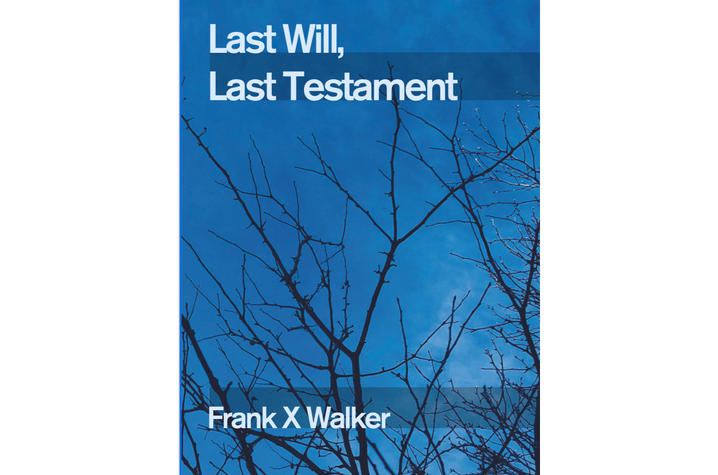 Lexington, Ky. (April 19, 2019) — If you were to walk into the dining room of Frank X Walker's Lexington home, it wouldn't look like your typical space for hosting dinner parties. Instead, it's been converted into a studio and a nursery, where Walker now spends the majority of his time. The room is often filled with the two things he is most passionate about — work and family.

For Walker, an English professor in the College of Arts and Sciences at the University of Kentucky, last summer marked the beginning of a new era — an era ignited by pain and fueled by passion.

"After my father died, I felt compelled to paint a portrait of him, as a gift to my sister. We had very few photos of him in our possession," he said. "Before I had even completed the painting, I began to realize how much I had missed making visual art and how therapeutic it was for me."

So, Walker bought more canvas and kept at it. With every stroke of the brush, he was reminded of his first love — the world of visual art.

"I hadn’t actually thought about how much I missed the joy of creating something with my hands that sprang from my imagination, until last year. I’ve been to so many museums and art exhibits, always leaving with a kind of yearning that would remind me that 'it,' that passion, was still in there somewhere behind all those words."

After 30 years of focusing on writing, teaching and administration, Walker has officially returned to his roots with a new exhibit titled, "Black Star Seed: When Mi Cyaan Find Di Words." More than two dozen pieces — drawings, paintings and wood and paper assemblages — are on display at the Carnegie Center for Literacy and Learning through June 11.

"Back in the '90s, I was obsessed with the Middle Passage. Specifically, the 'tight packing' images in history books of captured Africans being transported to the New World," Walker explained. "My new work will reveal that I’m still obsessed with the impact of the Atlantic slave trade and the liberation of African people."

Walker stopped making visual art in the '90s. Simply put, it didn't pay the rent. "It was very difficult to make a living as a black artist in Lexington no matter what the medium or the subject was. My friend, LaVon Williams, was cranking out masterpieces that he had to sell mostly out of state because local art consumers, when interested, wouldn’t pay anything near what the art was worth. Like most artists, I have an ego, and I know the lack of support eventually convinced me that I just wasn’t good enough and that I should try something else."

That something else became 25 years of mostly arts administration. Walker has managed UK’s Martin Luther King Cultural Center, Lexington’s Bluegrass Black Arts Consortium and the state’s Governor’s School for the Arts. He also focused attention on writing, which yielded 10 books of poetry, six plays with Message Theater, a half dozen songs in a contemporary opera, two anthologies, a screenplay and an almost completed novel.

"I worked really hard to try to replace it. I stayed very busy, but I never lost my passion for visual art."

One of Walker's favorite new pieces, "Black Star Seeds," is an acrylic painting depicting two brothers hugging. The older is wearing an ornamental African mask and a T-shirt featuring West African adinkra symbols. The younger is wearing the jersey of Ghana’s national soccer team, the Black Stars. A red, black and green Marcus Garvey inspired flag fills up the background, and around the borders is a painted poem/prayer that appears in Walker's book, "Ink Stains & Watermarks."

"I hope viewers see what I’m trying to say, not only are the children our future, but the solutions to all our problems are in the future — more specifically in the hands of young people we are raising today. I’m an optimist, and I’m trying to say our future is bright, even though there are those who seem committed to not let all our seeds fully develop and grow."

Today also marks the launch of Walker's new book, "Last Will, Last Testament," which is connected to the exhibit. In fact, several works feature poems on canvas, and the art exhibit program is actually a chapbook of poems connected to the exhibit. "The poems were all written last year in an attempt to process the cyclone of emotions emanating from my new son’s birth and my father’s death, two life changing events that overlapped by three months."

Starting at 5 p.m., guests can enjoy refreshments and a first view of Walker’s multimedia exhibit. At 6:30 p.m., Walker will read from his new book. For more information about the book launch and the visual art exhibit, visit the Carnegie Center website.