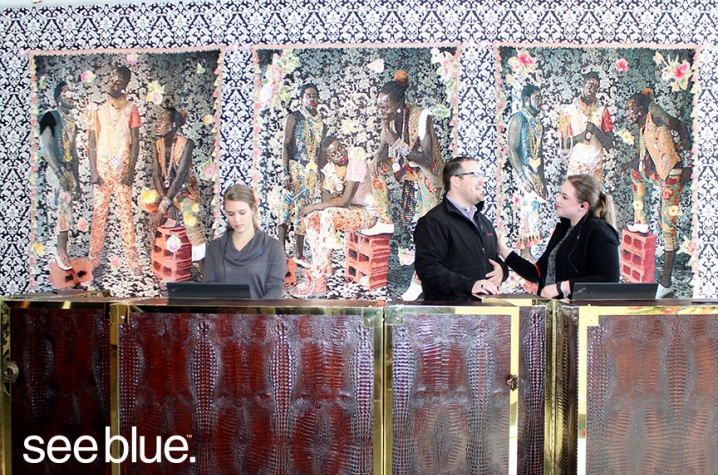 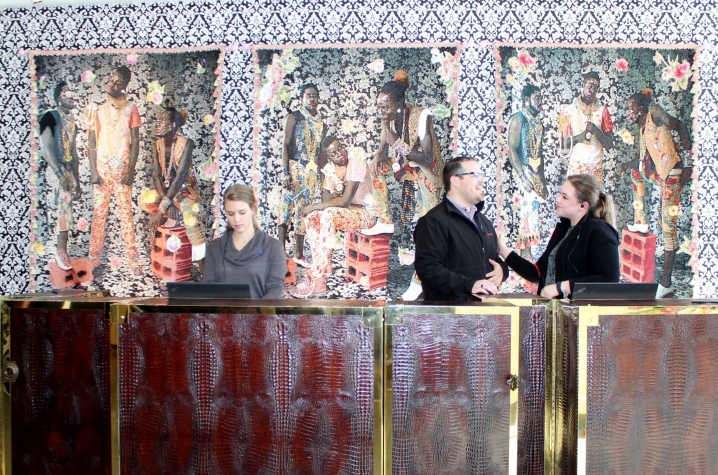 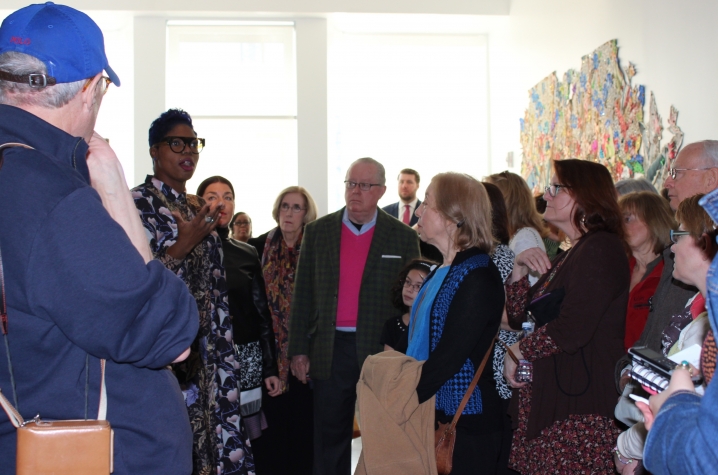 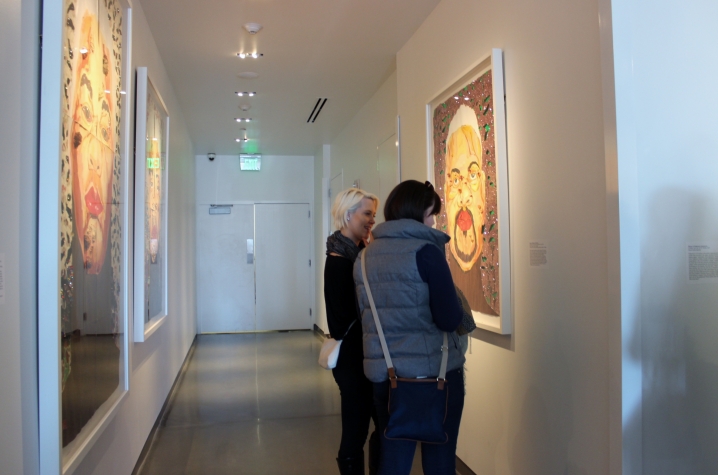 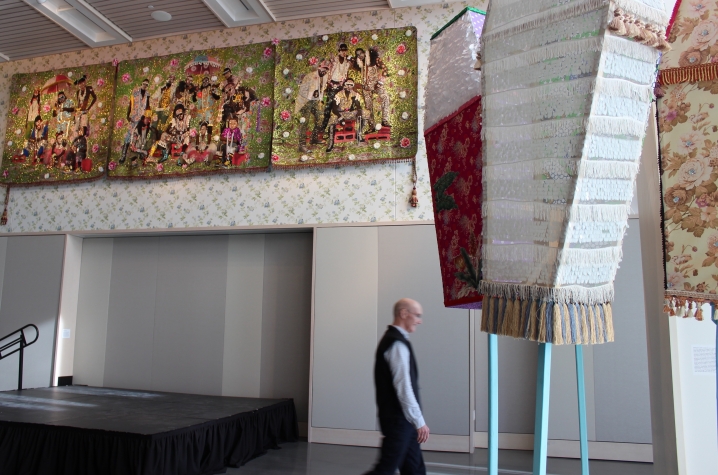 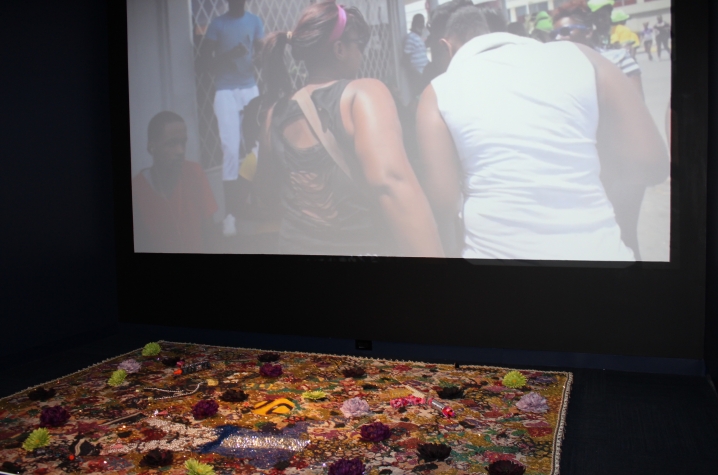 LEXINGTON, Ky. (March 7, 2016) — From Lexington's newest hotel, 21c, to the Museum of Arts and Design in New York City, and even on the nation's TV screens in the Fox hit "Empire," artwork by University of Kentucky's own Ebony Patterson is catching the spotlight.

Patterson's artwork raises questions about perceptions of masculinity within a Jamaican context and larger questions about beauty, gender ideals and constructs of masculinity within popular black culture. An artist in high demand, her career is taking her from one of her two home bases in Lexington, where she is an associate professor of painting at the UK School of Art and Visual Studies, all across the country and back to her home country of Jamaica.

On a recent whirlwind trip, from Jamaica to the Atlanta Contemporary, which is presenting her exhibition "Invisible Presence: Bling Memories," to Chicago, where she was installing and opening a pop-up show with Sanford Biggers at the Monique Meloche Gallery late last week, Patterson made a short stop in Lexington to be part of the opening of a 21c, the newest in a chain of award-winning luxury boutique hotels that combine their accommodations with celebrated contemporary art.

Several pieces of Patterson's work is currently on display at the new hotel as part of the exhibition "Dress Up, Speak Up: Costume and Confrontation." The show, curated by Alice Gray Stites, explores the complexity of contemporary identity. From Patterson’s families, dancers, gangstas and deceased, to the philosophers, dandies and faerie conjured by Yinka Shonibare, to portraits derived from allegory, autobiography and the art canon by Titus Kaphar, Berni Searle, Nathalia Edenmont, Fahamu Pecou and others, the exhibit of provocative and prophetic personages are costumed to enact and confront the legacy of embedded experience.

Visitors to the new hotel will find it difficult to miss Patterson's work which occupies a majority of 21c's first floor gallery space, including the wall behind check-in.

Local art lovers can see Patterson's work in person in "Dress Up, Speak Up" through September. In addition, work by another UK School of Art and Visual Studies connection, 2000 art studio graduate Tracey Stakelin can be seen in the hotel's restaurant, Lockbox. Stakelin's business, Delform Metal Fabrication, designed the bar in the facility.

Earlier this year, Patterson's "Dead Treez" at Manhattan's Museum of Arts and Design, the artist's first solo show in New York City, was promoted in The New York Times as a "smashing solo show."

For "Dead Treez," Patterson assembled five eye-popping tapestries and a life-size figural tableau of 10 male mannequins, dressed in a kaleidoscopic mix of floral fabrics. Meant to present a complex vision of masculinity, the installation is a meditation on dancehall fashion and culture, regarded as a celebration of the disenfranchised in postcolonial Jamaica. Her tapestries depict murder victims, as sourced through social media, embellished to seduce viewers into witnessing the underreported brutality experienced by those on the lower rungs of the socioeconomic ladder.

In addition to her own show, Patterson curated a smaller accompanying exhibit of pieces from the museum's collection of contemporary jewelry described by The New York Times as "a vision of a nightmare Eden in which this brilliant young artist is the master gardener."

But those interested in seeing the artist's work don't have to travel to Lexington, Atlanta, Chicago or New York City to see it. Last fall, Patterson's work even appeared on "Empire." The show, which showcases many pieces by black artists, uses the art to help shape the characters who "own" the work. Patterson's work, “Untitled VI” and “Untitled I (Khani+di Krew),” was seen in the show's second season premiere last fall adorning the walls of character Jamal Lyon's penthouse apartment.

A native of Kingston, Jamaica, Patterson earned her bachelor’s degree in painting at the Edna Manley College for Visual and Performing Arts and a master’s degree in printmaking and drawing from the Sam Fox College of Design and Visual Arts at Washington University in St. Louis.


In 2013, she was named to Huffington Post’s “Top 30 Black Artists Under 40.” That same year, Patterson was the first visual artist to be awarded the Rex Nettleford Fellowship in Cultural Studies, which is presented to a Caribbean resident under the age of 35 who has shown excellence in that field. In 2014, Patterson was awarded the Aaron Matalon Award for the best submission in the 2014 Jamaica Biennal and was selected to exhibit in "Prospect.3" in New Orleans. In 2015, the artist's work was featured in the 12th Havana Biennial.

Patterson has been teaching painting and mixed media at UK since 2007. To see more of Patterson’s artwork, or to learn more about her, visit the Monique Meloche website here.

The UK School of Art and Visual Studies, at the UK College of Fine Arts, is an accredited member of the National Association of Schools of Art and Design and offers undergraduate and graduate degrees in the fields of art studio, art history and visual studies, and art education.