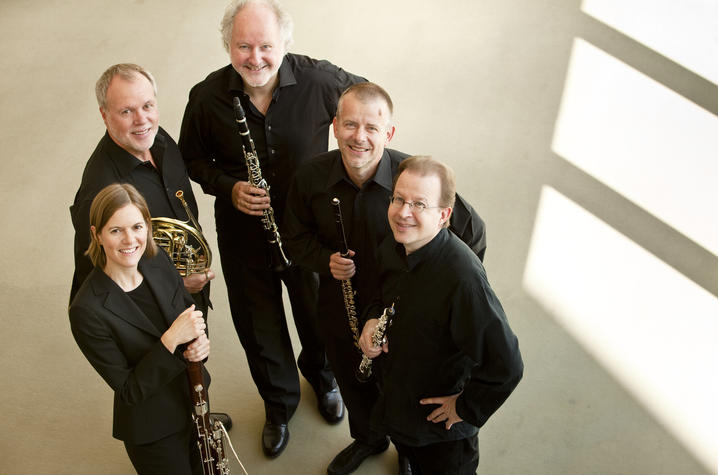 LEXINGTON, Ky. (Feb. 14, 2019) — The critically acclaimed University of Kentucky Symphony Orchestra, conducted by Maestro John Nardolillo, will continue its centennial concert season with Johannes Brahms’ Symphony No. 4 featuring side-by-side performances with the musicians of the Berlin Philharmonic Wind Quintet Feb. 20, at the Singletary Center for the Arts. The concert will be preceded by a recital by the celebrated wind ensemble Feb. 19, at Singletary Center.

The Berlin Philharmonic Wind Quintet was founded in 1988, during the era of Herbert von Karajan, as the first permanently established wind quintet in the famous orchestra's rich tradition of chamber music. The members are living musical witnesses to the hugely productive and influential musical partnerships of the Berlin Philharmonic not only with Karajan, but also with their more recent Musical Directors Claudio Abbado and Sir Simon Rattle.

Naturally, as members of the Berlin Philharmonic, they have also enjoyed important collaborations with every other major conductor of their times, including Leonard Bernstein, Sir John Barbirolli, Günter Wand, Bernard Haitink, Riccardo Muti, Pièrre Boulez and Daniel Barenboim, to name only a few. The quintet continues to astonish audiences worldwide with range of expression, tonal spectrum and conceptual unity. Many listeners and critics agree that the ensemble has succeeded in virtually redefining the sound of the classic wind quintet.

Berlin Philharmonic Wind Quintet's commitment to the wind quintet repertoire is passionate and in 1991 they found the perfect partner for their recording plans, the Swedish company BIS Records, known for its uncompromising standards. The results of this long and exclusive collaboration have received critical accolades worldwide, with many of these recordings already widely held to be "definitive" or "reference" performances.

Founded in 1918, the University of Kentucky Symphony Orchestra is a 100-member all-student orchestra presenting more than 50 concerts each year, including classical, chamber and education concerts. The group is made up of undergraduate and graduate students from across the United States, Asia, South America and Europe.

UK’s orchestra has regularly performed with world-renowned concert artists including Itzhak Perlman, Lang Lang, Sarah Chang, Gil Shaham, Lynn Harrell, Marvin Hamlisch, Denyce Graves, Christine Brewer, Pink Martini, Ronan Tynan, Mark O’Connor, Wynonna Judd, Keith Lockhart and Arlo Guthrie. The group has played Carnegie Hall in New York and the Kennedy Center in Washington, D.C., toured the state of Kentucky regularly, and toured China, playing concerts in major concert halls in Shanghai, Tianjin, Hangzhou, Yangzhou and Beijing. The orchestra’s performance at Beijing’s National Centre for the Performing Arts was broadcast on China Central Television, a network reaching more than 1.5 billion viewers. In the fall of 2010, the orchestra played for the opening ceremonies of the World Equestrian Games, a live performance that featured more than 1,500 performers and 200 horses. The performance was seen live on NBC in the United States by 39 million people, and by an estimated 500 million more television viewers worldwide

Nardolillo made his professional conducting debut in 1994 at the Sully Festival in France and has since made conducting appearances in the United States, France, Germany, Italy, Norway, Sweden, Denmark and China. He has led major American orchestras in subscription series concerts, summer and pops concerts, education concerts and tours, and for television and radio broadcasts.

In 2004, Nardolillo joined the faculty at the UK School of Music, where he is currently serving as the director of Orchestras.

Doors for both events open at 7 p.m. with music beginning at 7:30 p.m. Tickets are available through the Singletary Center ticket office online at www.scfatickets.com, by phone 859-257-4929, or in person at the venue. Children 6 and older are welcome.

UK Symphony Orchestra is part of the UK School of Music at the UK College of Fine Arts. Currently celebrating its 100th anniversary as well, the school has garnered national recognition for high-caliber education in opera, choral and instrumental music performance, as well as music education, music therapy, composition, theory and music history.