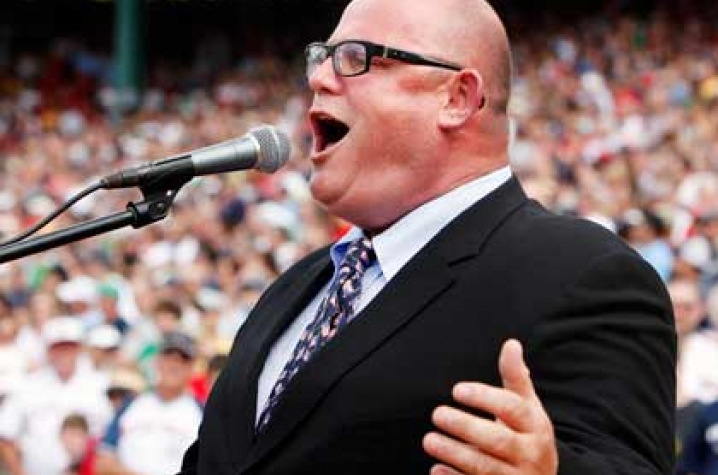 LEXINGTON, Ky. (Nov. 5, 2013) — Singer, physician, athlete and inspirational speaker Dr. Ronan Tynan is no stranger to adversity. When Tynan was 20, his legs had to be amputated below the knee after an auto accident caused serious complications. Just weeks after the operation, he was climbing up the steps of his college dorm, and within a year, he was winning gold medals in the Paralympics as a multitalented athlete.

Between 1981 and 1984, Tynan amassed 18 gold medals and 14 world records, of which he still holds nine. Trained as a physician, Tynan began his remarkable singing career through formal music study at the age of 33, achieving great success as a member of the famed Irish Tenors prior to establishing his career as a solo artist.

After overcoming such unbelievable odds and maneuvering numerous difficult obstacles, Tynan’s faces a challenge shared by millions: His mother’s vibrant spirit has been taken away by the long night of Alzheimer’s disease.

Tynan will speak and perform at the 27th annual University of Kentucky Sanders-Brown Center on Aging Foundation Dinner to be held Nov. 11. The event, presented and sponsored by Alltech, will be held at the Lexington Center in downtown Lexington, with more than 600 people expected to attend.

Tynan will join a long list of accomplished keynote speakers who are examples of successful aging. The renowned Irish tenor is known for his trademark performances at places and events including: the White House, Yankee Stadium, the funeral of President Ronald Reagan, the 80th birthday party of President George H. W. Bush, the Belmont Stakes, and the wedding of former New York mayor Rudolph Giuliani. Tynan has a longtime connection with the Bluegrass, through his work with the University of Kentucky School of Music. Dr. Tynan, a friend of Dr. Lyons and Alltech, has shared his vocal and speaking talents as a contributor to Alltech events. He delivered performances during the Alltech FEI World Equestrian Games™ 2010 in Lexington, Ky., and during Alltech’s annual International Symposiums. Alltech endows Dr. Tynan’s position as Artist-in-Residence at the University of Kentucky Opera Theatre. Dr. Tynan serves as a mentor to students who have received scholarships through Alltech’s Vocal Scholarship Competition, which awards $500,000 in scholarships annually to vocal performers attending the University of Kentucky.

The dinner will fund internationally recognized ongoing research at the Sanders-Brown Center on Aging, where researchers are engaged in the battle against Alzheimer's disease and other age-related illnesses. Individual tickets to the dinner are $175 each, with proceeds benefiting SBCoA. Corporate and individual table sponsorships are available starting at $1,500. For more information or to purchase tickets, contact the SBCoA Foundation at (859) 323-5374 or lisa.greer@uky.edu for reservations or more information.

About the Sanders-Brown Center on Aging:

The Center on Aging has been conducting research on Alzheimer’s disease, stroke and other aging-related concerns for more than 30 years. America's population is aging, resulting in significant economic, social, educational and health challenges to the well-being of our nation. The UK Sanders-Brown Center on Aging is at the forefront of this challenge. Through a gift from the Eleanor and John Y. Brown Jr. Foundation and a matching grant from the Commonwealth of Kentucky, the Sanders-Brown Center on Aging opened in 1979 and is one of 10 original National Institutes of Health-funded Alzheimer’s Disease Research Centers. Today, the center is an internationally prestigious research center. Alltech’s Life Sciences Division enjoys strong research collaborations with the Sanders-Brown Center on Aging. These range from studying the mode of action of our compounds at a molecular level in brain – in the laboratory of Dr. Mark Lovell – to fully-fledged human clinical trials, which are being supervised by Dr. Gregory Jicha. Our ultimate goal, of course, is to develop a treatment which will significantly slow the onset and progress of Alzheimer’s Disease.

The center is dedicated to advancing the well-being of the elderly. Its major goal is to support healthy aging. It is at the forefront of research on prevention, early diagnosis of dementing diseases and studies on the causes of those diseases. The center also is one of five Commonwealth of Kentucky Centers of Excellence.

Founded in 1980 by Dr. Pearse Lyons, Alltech improves the health and performance of animals, plants and people through natural nutrition and scientific innovation. With more than 3000 employees in 128 countries, the company has developed a strong regional presence in Europe, North America, Latin America, the Middle-East, Africa and Asia. For further information, visit www.alltech.com. For media assets, visit www.alltech.com/press.

Alltech is the proud title sponsor of the Alltech FEI World Equestrian Games™ 2014 in Normandy. For more information about these prestigious global championships, visit www.alltechfeiweg2014-normandy.com.