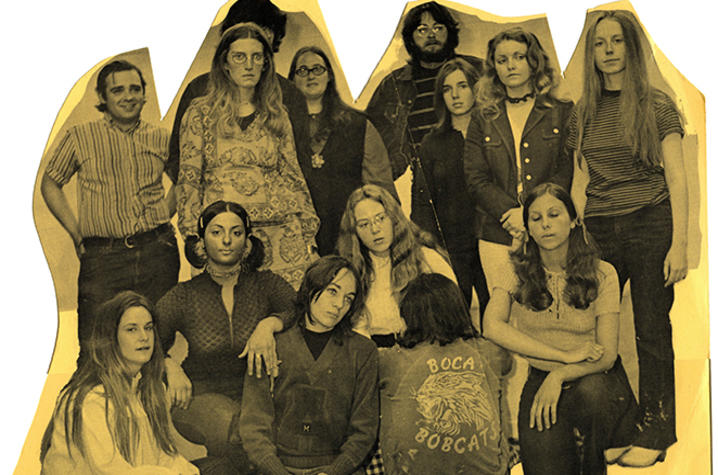 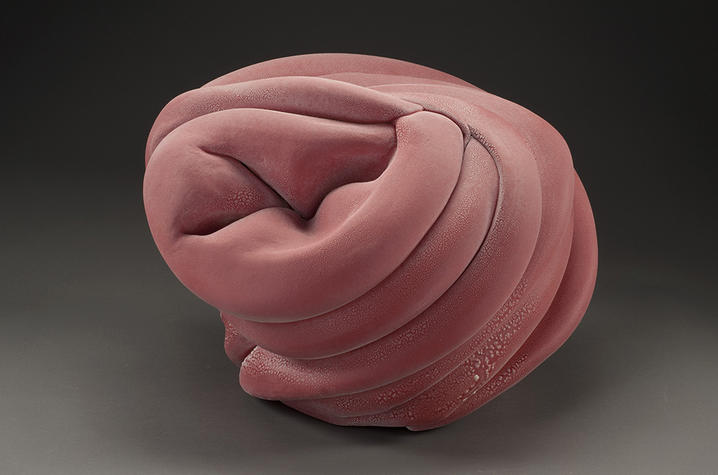 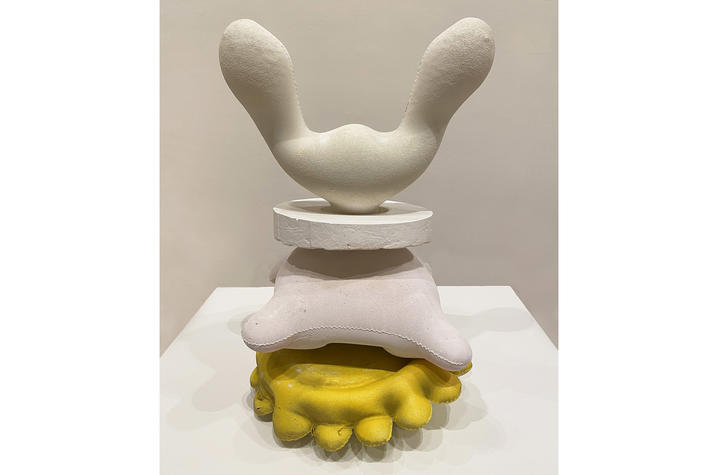 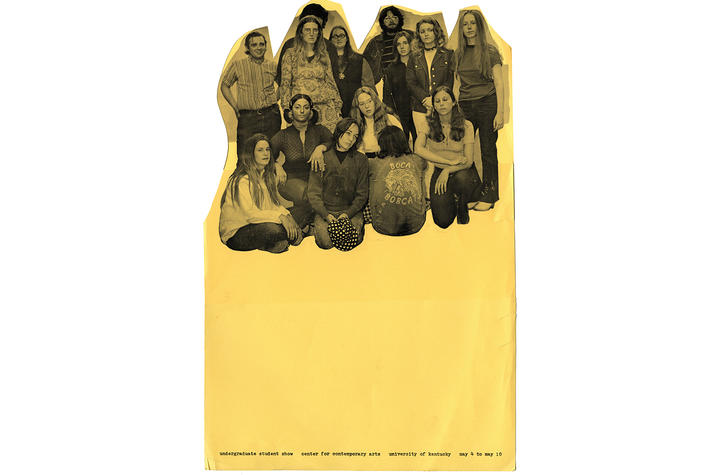 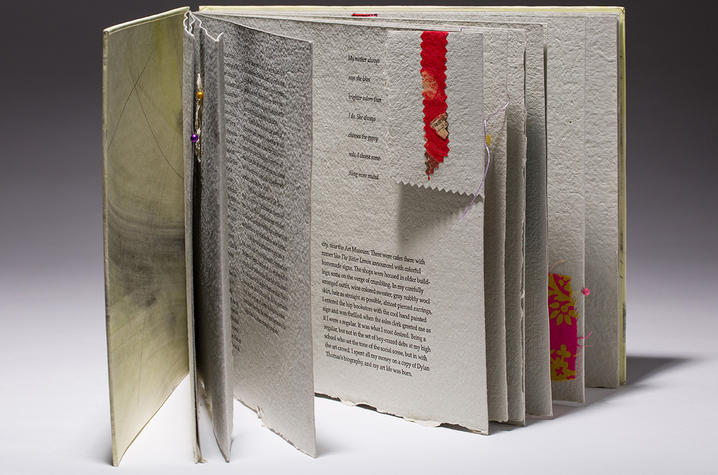 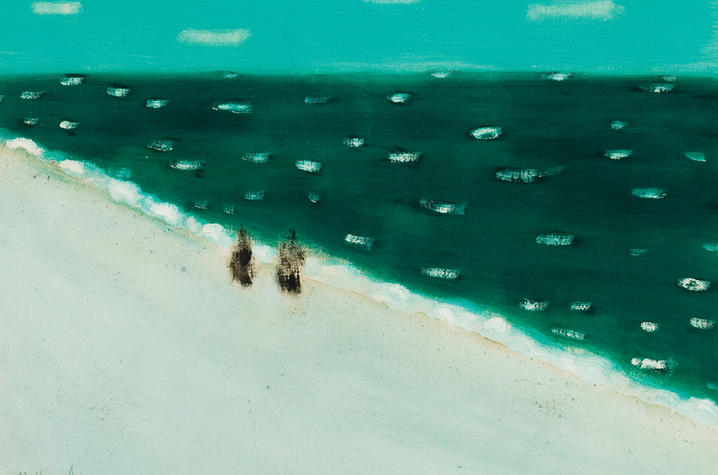 LEXINGTON, Ky. (Jan. 24, 2020) — The University of Kentucky Art Museum is pleased to announce the opening of two new exhibitions honoring a trio of Kentucky artists. "Body Language" features Hunter Stamps, associate professor of ceramics at UK’s School of Art and Visual Studies, and Wilmore artist Mike Goodlett, whose work is well known in the region. "Redressing the Sixties" traces the five-decade career of UK alumna Susan E. King, who was a founding member of the Woman’s Building in Los Angeles and spent 30 years in California before returning to Lexington. Both free public exhibitions open Jan. 25 and run through April 19.

Additionally, the Art Museum is honoring patrons who have generously contributed art to the collection over its long history with a series of exhibitions. “These exhibitions, with their focus on the vitality and creativity of artists who live in Kentucky, and the recognition of several generous donors, is an appropriate way for us to celebrate the 40th anniversary of the museum,” said Director Stuart Horodner. “While we present and collect a range of historical and contemporary art, a key aspect of our mission is to recognize and engage with artists and patrons who make the Commonwealth their home.”

In "Body Language," Stamps and Goodlett use a variety of media to create sculptures with a deep relationship to human flesh and form. Without being literal, their work suggests body parts and organs, the fluidity of desire, and both the joy and anxiety of living as physical beings.

Stamps has a profound knowledge of the properties and malleability of the clay that he often pulls into fleshy folds or builds into totemic figures. He creates seductive surfaces by experimenting with glazes and materials such as rubber, encaustic or resins. The finished forms seem both familiar and alien, creating a sense of recognition, but also tension and dissonance because the imagery cannot quite be deciphered.

Goodlett’s work reflects his negotiation of gender roles while growing up here, given that his identity was distinctly at odds with traditional notions of masculinity. To create sensual abstract shapes, Goodlett casts liquid plaster or cement in molds he makes of spandex, a fabric often used to shape flesh. The artist’s pithy sense of humor also emerges in a series of figurative sculptures imbued with quirky personalities, ranging from sphinxlike figures to whimsical beings.

Stamps’ sculptures have appeared in more than 170 juried, invitational and solo exhibitions in Austria, China, Croatia, Germany, Mexico, Spain and the United States. They are part of the permanent collections of the Cultural Center of Kapfenberg, Austria; the Jingdezhen Ceramic Institute in Jingdezhen City, People’s Republic of China; and the Keramikmuseum Westerwald in Höhr-Grenzhausen, Germany.

Goodlett has had solo exhibitions at Galerie Christian Berst in New York, New York; Institute 193 in Lexington; John Michael Kohler Art Center in Sheboygan, Wisconsin; and Tops Gallery in Memphis, Tennessee. He was one of 20 artists featured in the 2019 Atlanta Biennial.

Susan King grew up in Lexington with deep Kentucky roots and was shaped by a family of Southern storytellers. In "Redressing the Sixties," she uses art, ephemera and personal narratives to relate the story of her journey as an artist — from her beginnings in 1965 as a UK student to a 30-year stint in Los Angeles, and back again. Along the way, she became a founding member of the legendary nonprofit community art center known as The Women’s Building in Los Angeles, headed the Women’s Graphic Workshop, became internationally known for her artist books, and developed a serious interest in photography.

In this exhibition, King shows work incorporating a variety of media and forms, including photography, textiles and sewing, mail art, printing and bookmaking. She also creates a Museum of Muses dedicated to the women who inspired her, ranging from the diarist and printer Anaïs Nin to the painter Georgia O’Keeffe and photographer Imogen Cunningham. Her deep knowledge of art and art history is central to her practice.

King has exhibited widely at venues including the Center for Book Arts and the Metropolitan Museum of Art in New York; the J. Paul Getty Museum and the San Francisco Center for the Book in California; and Princeton University in New Jersey. Among the institutions collecting her work are the Bibliothèque nationale de France in Paris; Getty Research Institute library and Otis College of Art and Design in Los Angeles; Metropolitan Museum of Art and Museum of Modern Art in New York; and the Victoria and Albert Museum in London.

“A Celebration of Donors”

The museum is celebrating the passion and insight of donors whose generosity has meaningfully shaped the collection. Exhibitions recognize significant gifts from Robert C. May, George and Susan Proskauer, Gerald T. and Ann W. Silvers, and Mr. and Mrs. James Wenneker.

May is intimately connected to photography at UK. The endowment he created funds a highly respected annual lecture series and has supported the purchase of 465 works thus far, making photography a key component of the museum’s holdings. His bequest also included approximately 100 works by leading 20th-century photographers including Berenice Abbot, Ansel Adams, Imogen Cunningham, Walker Evans and Ralph Eugene Meatyard, as well as almost 1,300 of his own photographs.

George and Susan Proskauer, refugees from Nazi Germany, retired to Buck Pond Farm in Versailles to breed horses. Their 1992 bequest of more than 200 works is a modernist treasure trove, including work by Europeans such as Jean Dubuffet, Joan Miró and Pablo Picasso and Americans Milton Avery and Alexander Calder. They also gifted exquisite art glass ranging from Tiffany and Steuben to Gallé and Daum, and fine examples of American folk art.

A passion for late 19th- and early 20th-century American art guided the formation of the collection of Ann and Gerald Silvers. The couple specialized in — but did not limit themselves to — the work of artists who were part of the Cincinnati/Northern Kentucky arts community at the turn of the century. Among their gifts have been work by Charles Salis Kaelin, Frank Harmon Myers, John Henry Twachtman and John Ellsworth Weis.

Nineteenth-century French art — with a few diversions to Austria and America — was the primary interest of James Wenneker, well known as a businessman and philanthropist in Lexington. His gifts to the museum range from beautiful drawings by William-Adolphe Bouguereau and Léon Augustin L’hermitte to a painting by the well-known military artist Jean-Baptiste Edouard Detaille. A winsome portrait, "The Mascot," by Jules-Adolphe Goupil, is a museum favorite.

A public opening reception for these three exhibitions will be held 7-8:30 p.m. tonight (Friday), Jan. 24, at the museum.

The UK Art Museum, located in the Singletary Center for the Arts at Rose Street and Euclid Avenue, is open 10 a.m. to 5 p.m. Tuesday through Thursday, 10 a.m. to 8 p.m. Friday, and noon to 5 p.m. Saturday and Sunday. Admission is free, but donations are encouraged.