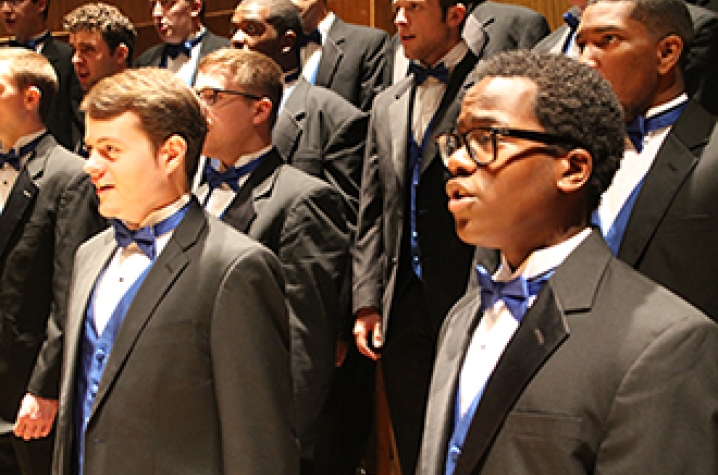 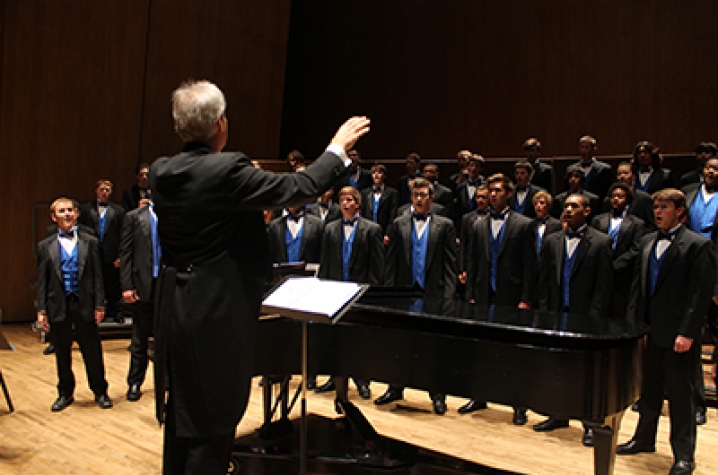 "Gaudete" performed by the UK Men's Chorus. Video courtesy of American Choral Directors Association. A transcript of this video can be seen here.

LEXINGTON, Ky. (Feb. 23, 2015) — The University of Kentucky Men’s Chorus is one of only two all-male collegiate groups who have been selected to perform at the American Choral Directors Association (ACDA) National Conference being presented later this week in Salt Lake City. This evening, the 2015 UK Men’s Chorus will give audiences a free sneak preview of the national concert 7 p.m. tonight (Monday), Feb. 23, at the Singletary Center for the Arts before leaving for Utah.

Under the direction of Jefferson Johnson, director of Choral Activities at UK School of Music, the UK Men’s Chorus will perform at the prestigious ACDA National Conference on Feb. 26 alongside many of the world’s most revered choral musicians and conductors. The UK Men’s Chorus was one of only two all-male collegiate choirs selected to perform at this year’s ACDA conference with the University of Michigan Men’s Glee Club being the second.

The ACDA “Send-Off” Concert will not only showcase several works commissioned specifically for the UK Men’s Chorus, but it will also highlight featured soloists Scott Wright, associate professor of clarinet, and guest vocalist Keith Dean, of the American Spiritual Ensemble.

Joining the UK Men’s Chorus for the “Send-Off” Concert will be special guests Lafayette High School Madrigal Singers, conducted by Ryan Marsh. The Lafayette Madrigal Singers have distinguished themselves as one of the top high school choirs in America.  They will be performing a reprise of the 30-minute program that they presented at the Kentucky Music Educators Association (KMEA) conference in Louisville on Feb. 5.

As part of the ACDA National Conference, UK Men's Chorus will have performances at the prestigious Salt Lake City Tabernacle (home of the Mormon Tabernacle Choir) and at Abravanel Hall (home of the Utah Symphony). The chorus recently commissioned and premiered new works by Richard Burchard, Michael Engelhardt and Stacey Gibbs.

Rehearsing twice weekly and touring frequently, the UK Men’s Chorus is dedicated to promoting and celebrating male singing at all stages and for all ages.

For more information on the ACDA Send-Off Concert or the UK Men’s Chorus, contact:

UK's Men's Chorus is part of UK School of Music at UK College of Fine Arts. The school has garnered a national reputation for high-caliber education in opera, choral and instrumental music performance, as well as music education, composition, and theory and music history.