LEXINGTON, Ky. (Feb. 12, 2021) — The Houston Grand Opera virtually presented the 33rd annual Concert of Arias this February and awarded the first-place prize of $10,000 to University of Kentucky College of Fine Arts alumnus Key’mon W. Murrah, who earned his bachelor’s degree in arts administration and minor in vocal performance in 2018.

On Feb. 1, Murrah was also awarded the 2021 Lyman T. Johnson Torch of Excellence Award for the College of Fine Arts presented by the UK Alumni Association Lyman T. Johnson African American Alumni Group, in partnership with the UK Office for Institutional Diversity. The program honors and celebrates African American students and alumni from each college who epitomize the ideals of Lyman T. Johnson. UK's academic colleges select alumni whose faith, hard work and determination have positively affected the lives of people on the UK campus, the city, state or nation.

“Key’mon is an example of an emerging arts leader who is utilizing the skills and knowledge that he learned within the College of Fine Arts to build a career in music performance,” she said.

In 2018, Murrah won the Encouragement Award for the Metropolitan Opera Council Central District Auditions. In 2020, he was a winner of the Metropolitan Opera Council Nashville District Auditions. Additionally, he took the second-place award in the Emerging Soloists Competition and was a finalist in the Opera MODO Opera Competition. This year, he also toured with the American Spiritual Ensemble and was selected as a Young Artist at the Glimmerglass Opera Festival.

“Key’mon has leveraged his business acumen into founding his own company, Murrah Music Studio, in Lexington, Kentucky,” Shane said. “Key’mon was recently nominated for the Emerging Leaders of Color leadership program offered through South Arts, a nonprofit regional arts organization empowering artists, organizations and communities, and increasing access to arts and culture.”

In addition to his many achievements as an arts leader, Murrah has had a successful career as a rising opera star working with the Glimmerglass Festival, Red River Lyric Opera and the American Baroque Opera Company, where he performed one of his favorite roles, Asprano, in Antonio Vivaldi's "Montezuma."

"It's been amazing to see the growth in Key'mon's voice over the last few years,” said Everett McCorvey, director of the UK Opera Theatre program. “When he made the switch to countertenor, it seems as if his entire voice opened up and the opera world is certainly beginning to take notice with recent successes in the Metropolitan Opera National Council Auditions, the Houston Grand Opera Auditions, and recent features in opera magazines. People are beginning to recognize the importance of his talent to the opera world."

Murrah says he did not originally plan to attend college, but his now vocal teacher, Angelique Clay, encouraged both Key’mon and his twin brother, Kay’mon, to audition for the UK School of Music. Both brothers were accepted and awarded scholarships to study in the vocal performance program.

"I am extremely proud of Key’mon and his recent accomplishments," Clay said. "I have known Key’mon since he was a high school student and have been his voice teacher for the last three-and-half years. Over the years, I have watched Key’mon blossom from a talented young tenor who lacked confidence and direction into a phenomenal and exciting countertenor who sings with great artistry, power and elegance. The pathway to excellence has not always been easy or straight-forward for Key’mon, but he endured and transcended obstacles to eventually find his passion, focus and success. I know that his recent awards and recognitions are just the beginning of what will be a very bright future. It has been my honor and privilege to be a part of his journey."

Murrah says some of his favorite highlights from UK were getting to perform with the UK Opera Theatre and meeting the Arts Administration faculty.

Offering words of wisdom to students preparing to transition into the professional world, Murrah says, “The biggest tip would be to start now. Get the experience and connections you need while you are still in school.”

What’s next for the award-winning opera singer and arts administration professional? Murrah hopes to secure concerts and operas in Europe and start working on an album. 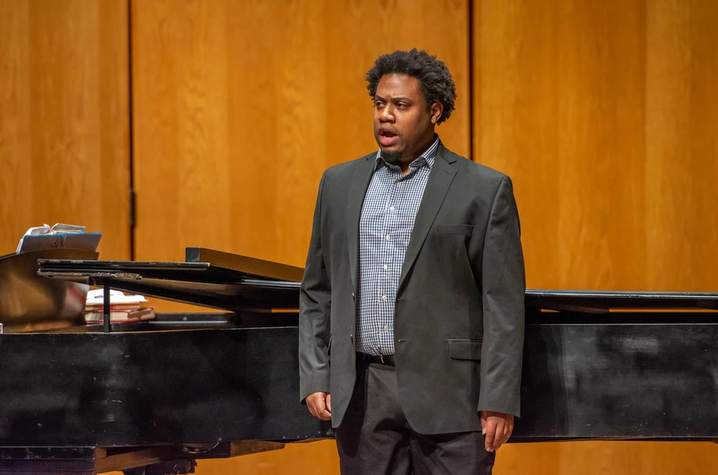 Key'mon Murrah earned his bachelor's degree in arts administration and minor in vocal performance from UK in 2018.