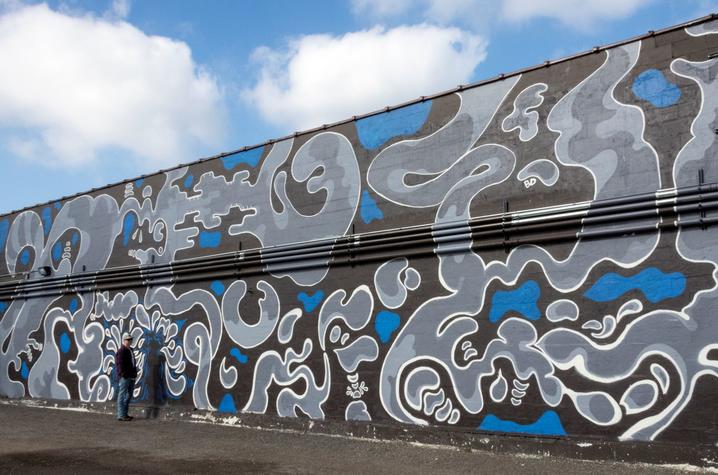 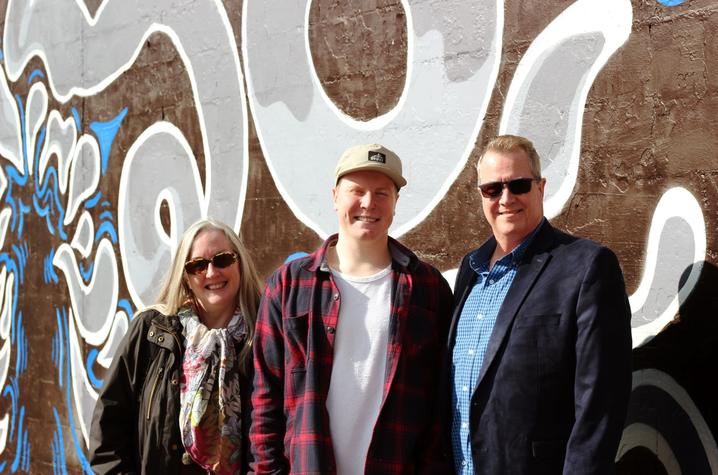 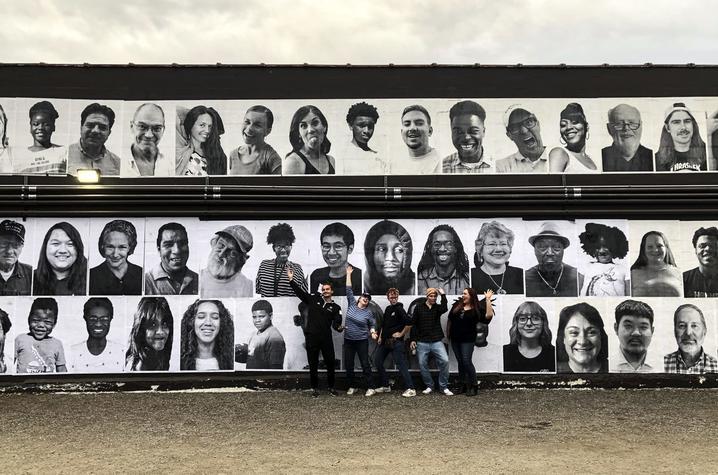 LEXINGTON, Ky. (March 27, 2020) — If you've picked up a meal from Carson's Food & Drink in downtown Lexington recently, you may have seen some artwork by University of Kentucky School of Art and Visual Studies student Ben Darlington, an inspiring example of UK's town and gown relationship with the Bluegrass.

This is the second work of art from UK the local restaurant has provided a canvas for, the first being a mural featuring faces of Lexington citizens that was part of the InsideOut project that graced the building in mid-November 2019.

Lee Ann Paynter, lecturer in digital media foundations and photography in UK’s School of Art and Visual Studies, has been a loyal customer of Carson’s since it opened and decided to approach the restaurant owner, Mark Fichtner, about the InsideOut project, an international art project initiated by French photographer JR.

After some research about the InsideOut project, Fichtner agreed to let Paynter and her guerilla art class get to work on their own version of the InsideOut Project based on interviews and photos taken over the past several years from communities around Lexington.

However, after the initial project was installed, unexpected weather conditions brought the installation down much earlier than Paynter or her students expected.

To replace the original art, Paynter approached one of her students, Ben Darlington, a digital media design senior, with a minor in media arts and studies in the College of Communication and Information. Darlington had been doing an independent study with Paynter on mural work for the past year.

“Last semester I talked to Lee Ann about getting into mural painting because I took her guerrilla art class the previous year, and we worked with PRHBTN and got to help a handful of famous artists like Alice Mizrachi and Spencer Reinhardt, just to name a few,” Darlington said.

The UK senior enlisted the help of his family from Northern Kentucky to execute his work. “It was a pretty big undertaking considering it was the first mural I'd ever done and it was on a 75-foot wall, but Mark and Lee Ann are both incredible people and had my back the entire way."

Darlington added he owes a “huge thanks to everyone who helped — Jason, Caleb, Shaddys, Ellen, Maddie, Mom, Dad, and Granny and Grandaddy ... I realized that I underestimated the scope of this project and started hitting people up. Everyone volunteered their time to help me finish this thing and without them I’d probably still be working on it!”

Fichtner has been very pleased with the result. “I’ve been really happy with the process, and I was touched by the fact that his family came out and painted with him. I think that’s one of the things at Carson’s we really strive for — to be involved with our community and treat each other as family members. For Ben to do that, I think it’s exactly who we are at Carson’s and exactly what we should all be doing more of.”

To Fichtner, the piece represents something greater than a painted mural on the side of a building. “His (Darlington’s) actual family’s hands helped create it,' said Fichtner, whose family bond is something central to his business and is integrated into the literal foundation of his restaurant. “My grandfather’s Bible is buried in the foundation of our restaurant ... and so we are all about generations of family, supporting each other as we walk through life. That mural takes on a whole other aspect to me because of that family element.”

For his art, Darlington takes inspiration from various sources — mostly music. “There’s a lot I’m influenced by, but for this particular piece I let the music I listened to influence me. Artists like the $uicideboy$, Nujabes, Joji, Goth Babe, and Mac Miller are a few I remember listening to while making it. Also shout out to Restless Leg String Band and Lost Dog Street Band."

Asked what's next, Darlington said, “I always pictured myself living and working in the creative field out west somewhere, so maybe I could try that after college and see how things work out. I want to continue mural painting because it's such a good time and I'm really into it, but I also do a lot of digital artwork and videography work, and I'm starting to get into animation and audio production.”