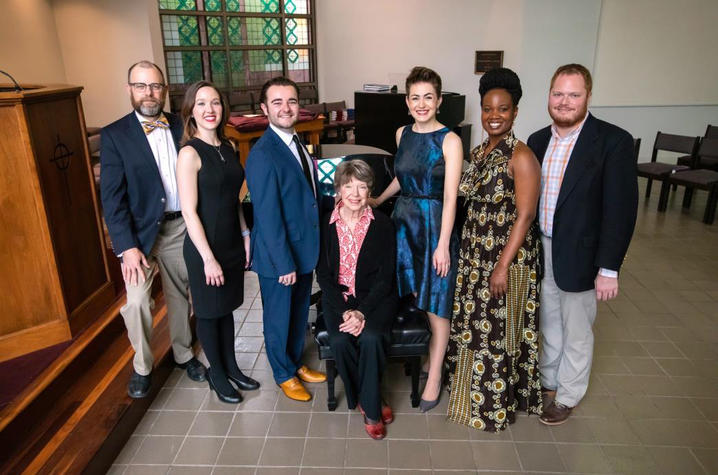 LEXINGTON, Ky. (May 31, 2019) — Two University of Kentucky students took home honors at the sixth Audrey Rooney Vocal Competition presented by the Kentucky Bach Choir on April 13. Ten singers from Kentucky and surrounding areas competed in the hopes of winning one of several cash prizes.

Audrey Heyman Rooney is a member of the Kentucky Bach Choir Board of Directors and is the current sponsor of the contest. The competition was founded to encourage young singers in the study and presentation of the solo repertoire of Johann Sebastian Bach and the sacred solo repertoire of Franz Joseph Haydn and Wolfgang Amadeus Mozart. Students are selected by submitting a recording to the Kentucky Bach Choir Artistic Director Marlon Hurst and Rooney. Out of the 10 singers selected to compete, four represented UK.

As part of the competition, the students sang in front of such adjudicators as Kayleen Sánchez, voice professor at the College of Charleston (South Carolina), and Zach Klobnak, college organist and instructor of organ, harpsichord and piano at Centre College and accompanist for the Kentucky Bach Choir.

This year, two Encouragement Awards were presented to UK Opera Theatre students — soprano and doctoral candidate Tanyaradzwa A. Tawengwa, of Zimbabwe, and vocal performance junior and countertenor Joseph Kingsbury, of Prospect, Kentucky. As award recipients, Tawengwa and Kingsbury each received a $500 cash prize and the invitation to perform with the Kentucky Bach Choir as a guest soloist.

Local audiences can hear Kingsbury perform next at "It's a Grand Night for Singing!" June 7-16, at UK's Singletary Center for the Arts.

The Kentucky Bach Choir shares the music of Bach and other master composers with the greater Commonwealth. In addition to its regular concert performances in Lexington, the choir has performed in Louisville, Berea, Richmond, Danville, Paris, Frankfort, Williamsburg and Maysville.