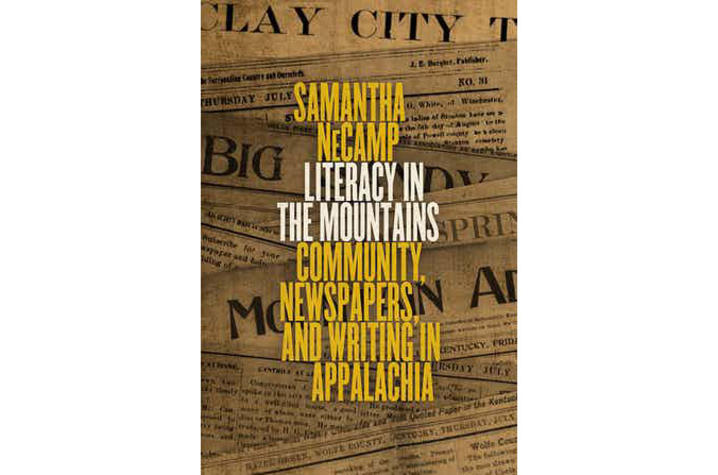 “Literacy in the Mountains: Community, Newspapers, and Writing in Appalachia” by Samantha NeCamp is the newest title in the series. By looking at five Kentucky newspapers printed between 1885 and 1920, it explores the complex ways readers in the mountains negotiated their local and national circumstances through editorials, advertisements and correspondence, revealing an engaged citizenry specifically concerned with education. Attacking many misrepresentations head on, “Literacy in the Mountains” reclaims the long history of literacy in the Appalachian region.

NeCamp will be signing copies of “Literacy in the Mountains” at the upcoming conference, and the six other “Place Matters” books — “Rereading Appalachia,” “Religion and Resistance in Appalachia,” “The Arthurdale Community School,” “Appalachia Revisited,” “Sacred Mountains” and “Appalachia in Regional Context” —  will be available in paperback.

In “Rereading Appalachia: Literacy, Place, and Cultural Resistance,” edited by Sara Webb-Sunderhaus and Kim Donehower, a multidisciplinary team of scholars assesses pressing topics and challenges stereotypes through an examination of language and rhetoric. A call to arms for those studying Appalachian heritage and culture, this collection offers fresh views on Appalachia and its literacy, hoping to counteract essentialist or class-based arguments about the region's people, and reexamines past research in the context of researcher bias.

Author Joseph D. Witt’s “Religion and Resistance in Appalachia: Faith and the Fight Against Mountaintop Removal Coal Mining” reflects a diversity of denominational perspectives and draws on extensive interviews with activists, teachers, preachers and community leaders to enhance, challenge and advance conversations about the region, as well as the relationship between religion and environmental activism.

“The Arthurdale Community School: Education and Reform in Depression Era Appalachia” details the homestead community and school of Arthurdale, West Virginia, which sought to enable children and adults to regain a sense of identity and place by exploring the region’s history and culture. A fascinating study of innovation and reform in Appalachia, Sam F. Stack Jr.'s book also investigates how this project's community model may offer insights into the challenges facing schools today.

In “Appalachia Revisited: New Perspectives on Place, Tradition, and Progress,” editors William Schumann and Rebecca Adkins Fletcher assemble academics and nonprofit practitioners to craft a pathbreaking study that analyzes continuity and change in the region through a global framework and explores topics such as race and gender, cyber identities and activist strategies. “Appalachia Revisited” is an essential offering for scholars and students as well as for policymakers, charitable organizers and those involved in community development.

A Christian ethical analysis of the controversial mining practice across Appalachia is the topic of Andrew R. H. Thompson’s “Sacred Mountains: A Christian Ethical Approach to Mountaintop Removal.” Thompson provides a thorough introduction to the issues surrounding surface mining, including the environmental consequences and the resultant religious debates, and highlights the discussions being carried out in the media and by scholarly works.

Coeditors Dwight B. Billings and Ann E. Kingsolver further the examination of new perspectives on one of America's most compelling and misunderstood regions in “Appalachia in Regional Context: Place Matters.” Billings and Kingsolver assemble artists and scholars from a variety of disciplines to broaden the conversation and challenge the binary opposition between regionalism and globalism.

Billings is professor emeritus of sociology at UK while Kingsolver is a current professor of anthropology in the College of Arts and Sciences.

Each of the above books will be available at the conference, as well as online at https://www.kentuckypress.com.