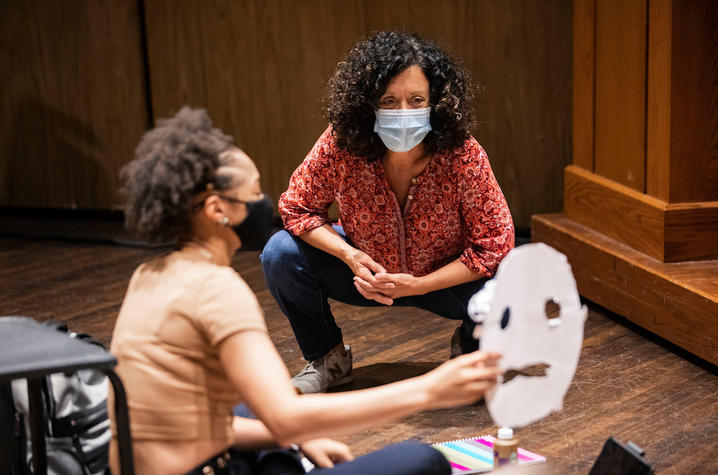 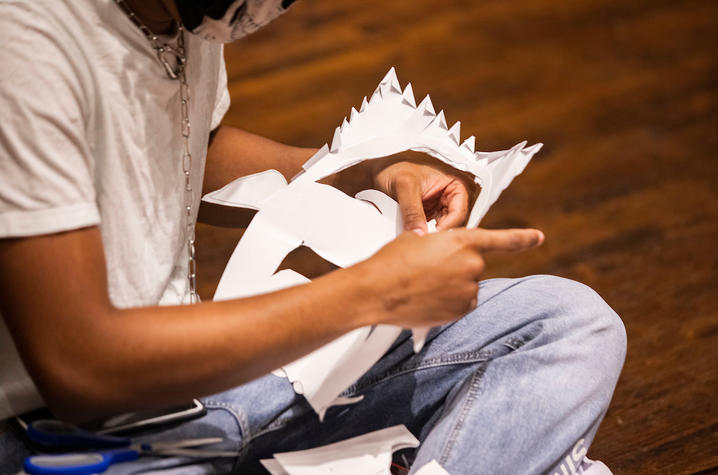 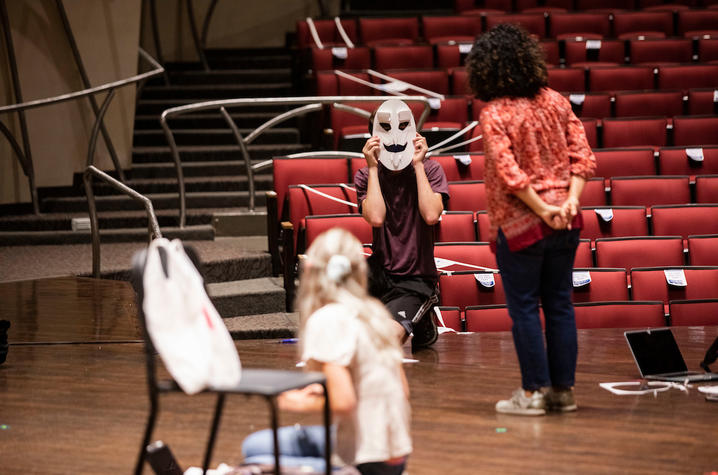 As today’s Wildcats don different types of masks and visors to stay healthy during the pandemic, one class of University of Kentucky theatre students is studying the use of masks in the creation of characters, reflecting back to theatre of ancient Greece and the archetypal characters of the Italian commedia dell’arte.

UKNow recently caught up with UK Department of Theatre and Dance Professor Nancy Jones to find out more about her UK Core class, Creativity and the Art of Acting, and her pedagogy that speaks to our current pandemic.

UKNow: On campus, people may have noticed musicians/vocalists are using variations of masks to perform. Is there any mask used in the field of theatre — historically or modern day?

Nancy Jones: Masks have been used for over two thousand years in theatre. The Greeks used masks as expressions of character, but it's also thought that they may have helped with actors' voice amplification in the giant amphitheaters.

The Italian Comedy (aka commedia dell'arte) was also a theatrical form that used masks for characters like Harlequin, Pantalone (the old man), Il Dottore, Il Capitano, etc. As these troupes traveled throughout Italy doing improvisational comedy, the masks helped audiences recognize archetypal characters in various troupes. Masks continue to be used as training tools for acting (especially neutral masks and character masks) as they help to employ the body to find the physical expression of characters.

UKNow: Your current TA 120 class had a lesson on masks, which seems timely given the current recommendations for society to wear masks in their everyday interactions. Tell us more about that specific lesson.

Jones: My students did a two-week unit on the history and practice of Greek theatre, incorporating study of voice projection, diction and proper breathing.

Students made their masks in class and then in teams staged and performed a choral ode from "Oedipus Rex" (coincidentally a Greek play about a plague) on the Singletary Center for the Arts Concert Hall stage. It was a tremendously successful assignment.

UKNow: How has COVID-19 changed your course this fall?

Jones: My class is totally revamped this semester because of the pandemic. I spent three months creating online content that is fused with the small group work they do in the hybrid setting to ensure students have a robust face-to-face experience.

I never before worked on Greek theatre in this class, but the restrictions of the pandemic led me to this, and it is an ideal area of study for learning about the acting process.

Similarly, when we studied commedia dell'arte, students focused on finding character through the body and becoming a physical representation of each character. Last week they worked on "lazzi." These are typically silent, physical comedic bits that were popular in the commedia dell'arte but still seen today in sitcoms and other comedy.

UKNow: What historical theatre practice will the students explore next?

Jones: Next we will explore the Delsarte system of acting that was used at the end of the 19th century and employed by silent film actors. Again, another great opportunity to use emotion and gesture rather than voice. Students will learn this historical technique and then bring it to life as they create their own silent films.

For a midterm project, students will divide into groups and create their own five-minute silent film. The students will storyboard their idea, decide who will play which roles, decide how to incorporate the Delsarte system, record scenes, incorporate title cards and music, and edit the film.

Former chair of the UK Department of Theatre and Dance, Jones brings an international resume of theatre experience to the classroom. On campus, she has helped with the development of many interdisciplinary projects and teaches a summer UK Education Abroad Program with Lewis Honors College students in Paris, France. She has received numerous grants and sits on the board of NAST (National Association of Schools of Theatre), and previously served on the boards of the Kentucky Foundation for Women and Kentucky Theatre Association.