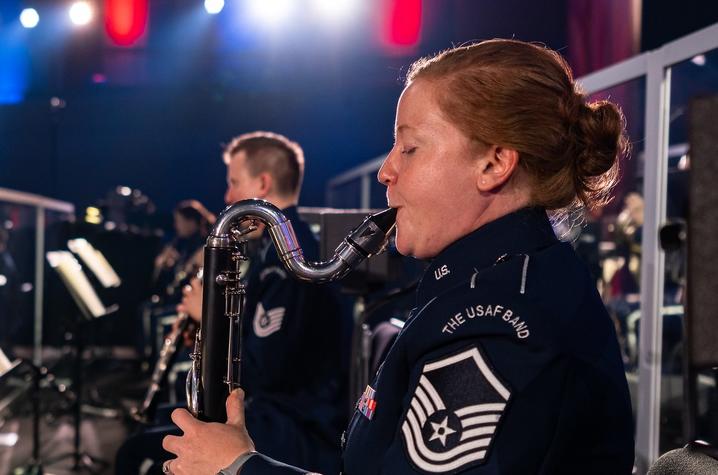 UPDATE from UK Singletary Center for the Arts — July 1, 2022: Due to a rise in COVID-19 cases in Fayette County and a “High” CDC Community Level designation, the U.S. Air Force Band concert scheduled for Thursday July 7, at the Singletary Center, has been canceled.  While this is disappointing news for the band and the Lexington community, it is a safety precaution to keep the members of the band healthy as they continue their tour.

The U.S. Air Force Band will still be performing on Wednesday July 6, at Louisville Male High School at 7 p.m. Tickets for this performance are free and available here: www.eventbrite.com/e/the-united-states-air-force-band-and-singing-sergea...

Please note that due to Louisville being moved into Medium COVID-19 Community Level by the CDC, proof of vaccination or a negative test result (PCR or rapid) no more than 72 hours old, is required to attend this performance.

LEXINGTON, Ky. (June 24, 2022) — The University of Kentucky School of Music will welcome the United States Air Force Concert Band to Lexington next month for a free concert for the UK and local communities.

The performance will take place at 7 p.m. Thursday, July 7, at the Singletary Center for the Arts Concert Hall.

With its present home on Joint Base Anacostia-Bolling in Washington, D.C., the United States Air Force Band is the Air Force's premier musical organization. Since its formation in 1941 as the Army Air Forces Band, the excellence demonstrated by the band's airmen musicians has reflected the excellence carried out 24 hours a day by airmen stationed around the globe. Today, the Air Force Band consists of six performing groups: Air Force Strings, Airmen of Note, Ceremonial Brass, Concert Band, Max Impact and Singing Sergeants. This premier musical unit continues to honor those who serve, inspires patriotism and military service in fellow citizens, and positively impacts the global community.

The event is free, but tickets are required, with a limit of four per order. Reserve your tickets here.

All seats are general admission, first-come-first-served, on the day of the performance.