LEXINGTON, Ky. (Oct. 1, 2019) — This weekend, when University of Kentucky’s Wildcat Marching Band (WMB) takes the field, it will be honoring a Wildcat legend on his high school alma mater’s turf in Ft. Thomas, Kentucky. The band will provide the soundtrack to Highlands High School’s game dedicated to quarterback Jared Lorenzen, who died July 3 at 38 years old.

A four-year starter for the Wildcats from 2000-03, Lorenzen was one of the most prolific quarterbacks in college football history. Lorenzen's career statistics featured 862 completions in 1,514 pass attempts (56.9%) for 10,354 yards and 78 touchdowns. An adept scrambler when necessary, he also ran for 12 touchdowns and accounted for 90 total TDs as a Wildcat. At the completion of his collegiate career, he had broken six NCAA records, four Southeastern Conference records and 11 UK records. Lorenzen was inducted into UK Athletics Hall of Fame in 2015.

After UK, Lorenzen was a member the New York Giants from 2004-07. A backup quarterback behind Eli Manning, He was a member of the Giants team that defeated the New England Patriots in Super Bowl XLII on Feb. 3, 2008.

On Friday, Oct. 4, the Wildcat Marching Band will present a pregame show, halftime entertainment and a closing performance after Highlands’ game with Conner High School. Kickoff for the game is 7 p.m. The game’s halftime show will feature Wildcat Marching Band’s Elton John program presented at UK’s first football game, which includes a band formation of Lorenzen’s UK jersey number — 22. In addition, the band will join Highlands' band in the stands and have learned the high school’s fight song for the game.

"We are so honored to be involved with this celebration for Jared Lorenzen," UK Director of Athletic Bands Dana Biggs said. "I want to thank Lori Duncan, band director at Highlands High School, and everyone at the school for inviting us to perform. Jared meant everything to both of our schools, and I think he would love the fact that we are coming together in his honor."

In addition to the Wildcat Marching Band performances, Highlands will retire Lorenzen’s jersey and induct him posthumously into the school’s Hall of Fame with Dale Mueller, his high school head coach, and Bluebirds teammate Derek Smith. The school has also painted its 22 hash marks blue and added #22 stickers to the team’s helmets this season.

Wildcat Marching Band is part of the School of Music at the UK College of Fine Arts. The school has garnered a national reputation for high-caliber education in opera, choral and instrumental music performance, as well as music education, music therapy, composition, and theory and music history. 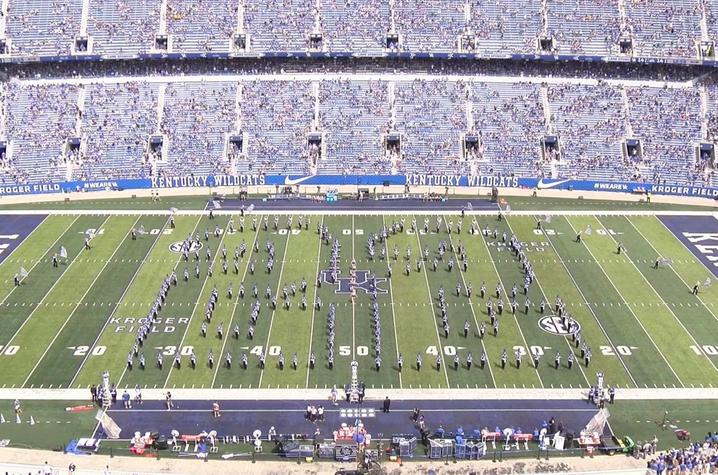 The Wildcat Marching Band opened the UK Football season with a program of Elton John music that featured the band in a 22 formation in memory of Jared Lorenzen. Photo courtesy of UK Bands.