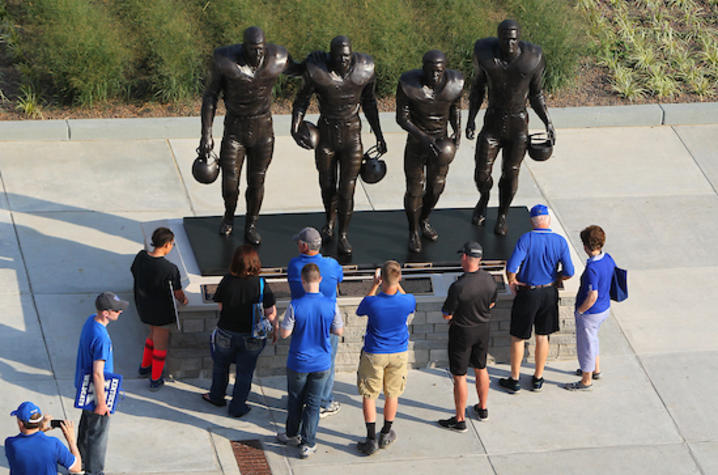 Greg Page, Nate Northington, Wilbur Hackett and Houston Hogg. These are names that—together—carry a legacy deeply ingrained at our institution; a legacy that changed the South forever.

These four men altered the trajectory of athletics in the entire Southeastern Conference, right here at the University of Kentucky.

They broke the barrier that divided us—a barrier that was the difference between integration and segregation; justice and injustice; hope and history.

Before Nate Northington, not a single African American had played football for an SEC team. That changed on September 30, 1967, when Northington faced the Mississippi Rebels and became the first black athlete in the SEC.

“All the incoming athletes at the University of Kentucky should be especially proud of the role our university played in changing the direction of college athletics in the south and the historical impact that took place,” according to Hackett.

Unfortunately, Northington’s journey was cut short when he decided to step away from the game after learning of his teammate’s death that same morning. Greg Page, also his college roommate, had died after suffering from an injury during a drill at practice.

The following year, Hackett and Hogg continued with the baton of change. They established a bond with their white teammates and ultimately changed the meaning of gamedays in the South.

And, Monday, we’ll have the opportunity to hear more about these experiences in Black in Blue, a new documentary airing on KET that will broadcast at 9 p.m. EST.

The documentary was directed by our very own alum and Academy Award-winning filmmaker Paul Wagner, with former UK quarterback Paul Karem serving as the executive producer. The film also includes a gospel music score by Linkin’ Bridge—award-winning singing group also from Kentucky.

It is a compelling and poignant reminder that what we do here, on this very campus, transcends time.

What we do now affects future generations.

Most importantly, the fundamental ideas that may seem out of reach now—like integration once was—may end up being the ideas that change our world for the better.

It’s what Hogg, who sadly passed in January, would have wanted us to remember.

That’s why, moving forward, we must honor Page, Northington, Hackett and Hogg beyond the statue the university unveiled outside the football training facility in 2016. We must implement this honor and respect into our actions every day, however big or small.

Especially now, as we face unprecedented challenges affecting the health and well-being of ourselves and loved ones, we must come together more than ever before.

During this time, let us learn from history and remember the experiences of Page, Northington, Hackett and Hogg. Instead of shying from racism and hatred, they overcame with triumph and bravery. They came out stronger.

“What really warms my heart is the opportunity for my parents, children and grandchildren to witness our story being told,” said Hackett. “I also believe it’s important that every African American athlete in the Southeastern Conference know the sacrifices that were made so that they have the privilege to play in the strongest conference in the country.”

Some of our very own brothers and sisters are experiencing loss and grief, isolation and xenophobia. Let us remind them they are not alone; that, this too, will be a mark in history we can reflect upon with pride that we lived out our values as the University for Kentucky.

I hope you will join me Monday in watching the Black in Blue premiere. If you aren’t in Kentucky, Black in Blue is also airing on PBS stations across the United States. I encourage you to reach out to your local station for a date and time to view.