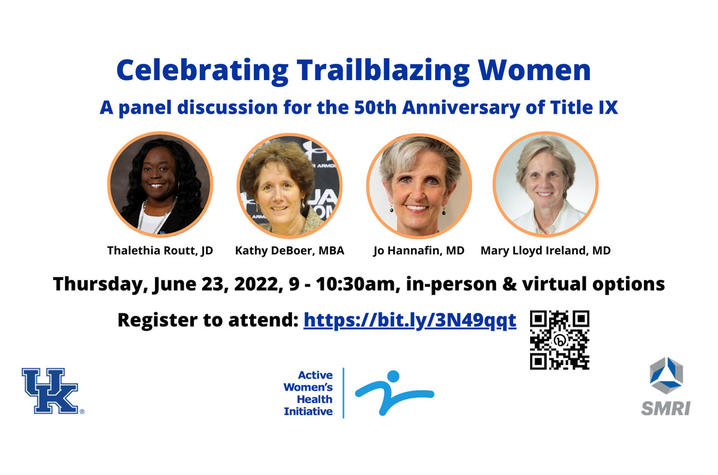 After all, as she says, she benefited from it.

“Because of Title IX, I had opportunities to participate in sport that were not available to my mom and women in her generation,” said Dlugonski, assistant professor of athletic training and clinical nutrition for the Sports Medicine Research Institute, and coordinator of the Active Women’s Health Initiative.

Dlugonski, who swam competitively at Penn State, will now help the University of Kentucky celebrate the 50th anniversary of Title IX — the educational amendment of 1972 that prohibits sex (including pregnancy, sexual orientation, and gender identity) discrimination in any education program or activity receiving federal financial assistance.

From 9-10:30 a.m., June 23, the Active Women’s Health Initiative will sponsor a panel discussion in Room 127 of the Charles T. Wethington Building titled “Celebrating Trailblazing Women: A panel discussion for the 50th Anniversary of Title IX.”

“Title IX has had a dramatic impact on the opportunities for girls and women in athletics and beyond,” Dlugonski said. “Our panelists will share stories that help us to learn lessons from the past, understand current challenges, and discuss future opportunities to enhance equity within and outside of sport.”

Register for the panel discussion here.

MORE ON THE PANELISTS

Thalethia B. Routt, J.D., is UK’s acting associate vice president for Institutional Equity and Equal Opportunity and is responsible for upholding the institution's commitment to equal opportunity in academic programs, employment, services, and activities. She has more than 20 years of legal experience in private practice and the public sector, including over 15 years with the university’s Office of Legal Counsel.

In addition to serving on the university’s Equal Opportunity Committee and the DEI Supplier Diversity Project, Routt has served on several other committees throughout her tenure with the university. She is a member of the DEI Leadership Team, serving as a co-executive sponsor for the Culture, Policies, and Programming Workstream. Routt is a member of the Women’s Executive Leadership Development (WELD) program 2022 cohort. She is also a member of the FCPS Board of Education’s Equity Council Committee and was elected as the parent representative on the FCPS Superintendent Screening Search Committee.

A native of Berea, Kentucky, Routt eceived her undergraduate degree from the University of Louisville in 1997 and her law degree from the University of Kentucky College of Law in 2000. She is a member of the Kentucky Bar Association, on the Board of Directors for the Lexington Fair Housing Council, and a Mother Member of the Central Kentucky Chapter, Jack and Jill of America Inc.

Mary Lloyd Ireland, M.D., now a sports medicine physician at UK Orthopaedic Surgery & Sports Medicine, was an Olympic team doctor in 1992 at the Summer Games in Barcelona. During her time as an Olympic team doctor, she primarily worked with members of the women’s basketball team and the gymnastics team. She joined the team at UK in 2008.

A native of Lexington, Ireland grew up playing sports. During her time as a student at Sayre School, she played field hockey and basketball and also was a swimmer. In 1972 and 1976, Ireland competed for the chance to join the United States swim team. She missed making the team by two-tenths of a second.

After the Olympics, she returned to Lexington and built a sports medicine program in private practice and served as a team physician for the UK Athletics for 12 years, becoming the first woman to serve as team physician for a Division I football team.

Jo A. Hannafin M.D., Ph.D., is board certified in orthopedic surgery/sports medicine. She is an attending orthopedic surgeon and professor of orthopedic surgery at Weill Cornell Medical College. She retired her clinical practice on May 31, 2021, and now serves as the vice chair of the hospital for Special Surgery Institutional Review Board.

She was a clinician-scientist with a focus on basic and translational research. She was a physician at the 1996, 2004, 2012 and 2016 Olympic Games, team physician for US Rowing for 27 years, team physician for New York Liberty for 16 years and is a member of the FISA Medical Commission. Hannafin was the first female president of the American Orthopaedic Society for Sports Medicine and has served on the AOSSM Board. She has received the Orthopaedic Research Society (ORS) New Investigator Recognition Award, the O’Donoghue Award for Excellence in Research, The Rovere Award, the Jack Kelly Award from US Rowing for Outstanding Contribution, and the ORS Women’s Leadership Award.

She is an honorary medical officer of the NYC Fire Department and received a Lifetime Achievement Award from HSS in 2014. In 2021, Hannafin received the AOSSM Robert E. Leach Sports Medicine Leadership Award and was inducted into the AOSSM Hall of Fame.

Kathy DeBoer is the executive director of the American Volleyball Coaches Association (AVCA) a position she has held since Feb. 1, 2006. Membership has doubled during her tenure. DeBoer is widely credited for leading the effort to get beach volleyball recognized as a collegiate sport.

Prior to the AVCA, DeBoer spent 23 years in intercollegiate athletics serving as a coach, administrator and fundraiser. She spent 18 years at the University of Kentucky, first as head volleyball coach, and finishing as the senior associate athletics director. She started her career at Ferris State University in Michigan. DeBoer was a collegiate athlete in volleyball, basketball and tennis. She was a finalist for the Wade Trophy and played two years of professional basketball after college.

DeBoer is a nationally known speaker on the impact of gender on competitive behavior in business and sports settings. Her first book, “Gender and Competition: How Men and Women Approach Work and Play Differently,” was published in 2004. DeBoer has a bachelor’s degree in humanities from Michigan State (1978) and an MBA. from University of Kentucky (1988). She is married to Mark Pittman and resides in Lexington.

“The women on this panel paved the way for women like me in sport and the workplace,” Dlugonski said. “I’m inspired by their stories and excited to share them with others who join us for this conversation.”