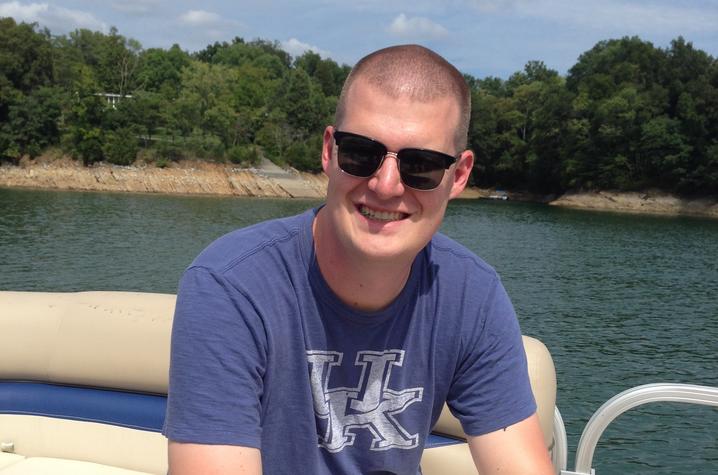 An Outdoor Pursuits Trip fund was established in Adam Prewitt's memory to benefit any member of the Pershing Rifles who wants to participate in one of its annual outdoor trips.

LEXINGTON, Ky. (July 28, 2020) — To say that Adam Prewitt lived life large might be a bit of an understatement. Descriptions from his family and friends describe a young man who was passionate about his life, about books and knowledge, the outdoors, adventure, University of Kentucky’s ROTC program and the Pershing Rifles, an elite college ROTC organization dedicated to military drill and developing leaders of character.

Most of all, however, you’ll hear descriptions of a man who cared about people, especially his friends, and the community at large. He was someone who would go out of his way to help a friend in need.

Adam Prewitt lived in Colorado with his family when it was time to choose a college. He received a nomination to attend West Point but instead, decided to attend the University of Kentucky where he received a scholarship. He graduated from UK in 2011 with a degree in political science. Adam’s parents, Virgil Prewitt and Tina Mueller, are from Kentucky and have a love for UK. The family moved to Colorado when Adam was very young.

Virgil Prewitt said his son was a good kid who evolved into a man of true character and that he became who he was partly because of attending UK, joining UK’s ROTC and the Pershing Rifles.

“Adam was a shining example of what we should put out into the world. He was incredibly intelligent and could do anything he wanted. What was important to Adam was not to use his intelligence to get a better job or make more money, but more about how he could contribute to his community and help others,” he said.

Adam passed away unexpectedly in 2020 at the age of 31. Despite his young age, he left an indelible mark on everyone whose life he touched, and particularly lives he impacted while he was a student at the University of Kentucky. In the immediate days following Adam Prewitt’s passing, Capt. Adam Crawford, professor of military science at UK, was approached by five alumni from UK’s Pershing Rifles to discuss what they could do in remembrance of Prewitt.

“Adam’s love of the outdoors came second only to his love for the people he was close to,” Crawford said. “We also decided to focus this on the Pershing Rifles because it was an organization that he held dear to his heart, as we all do.”

"Adam was as good a friend as anyone could ever have been. He was a constant staple in my life, and the lives of many others since we all met at UK," Crawford said. "He was the type of friend who was just there. It didn’t matter the circumstances, how far he’d have to travel, how much money it would cost him, or whether there was a plan, none of it mattered. If it was humanly possible for him to be present for something that was important to one of us, he made it happen."

Tina Mueller said her son loved most any outdoor adventures including skiing, cave diving, sky diving, rock climbing, scuba diving, hiking, trail running and whitewater rafting. Adam Prewitt also had a strong commitment to give back that included going on mission trips, feeding the homeless, serving children in need and other volunteer work.

“He made a positive impact on my life and the lives of so many others. He has left so many life lasting memories with us. I wanted to celebrate his positive influence with a way that continues to provide something positive to others that will make a meaningful impact on them,” Mueller said.

Virgil Prewitt said the endowment is not about two grieving parents memorializing their son with an endowment, so they would have something to hang on to, but something so much more.

“Adam was big on making sure everyone who wanted to go on the annual trip could go. He would do anything to make that happen,” Virgil Prewitt said. “The mere fact that 10 years after graduating from UK, friends he only talks to or sees maybe once a year think so much of him. I’ve heard many of his friends say they wouldn’t be the men they are today if it weren’t for Adam.”