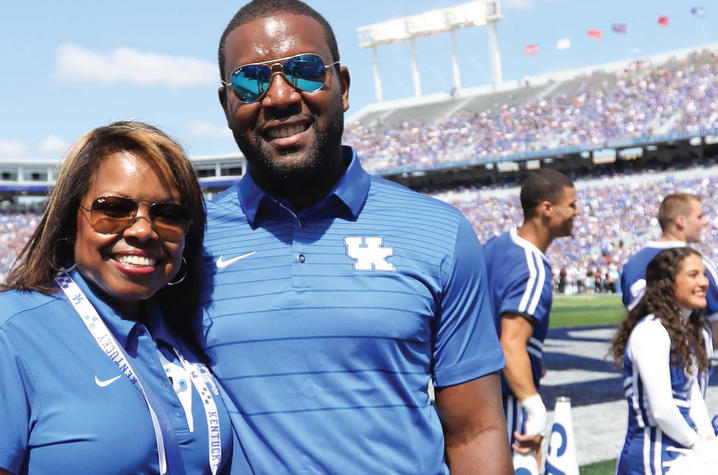 LEXINGTON, Ky. (Feb. 21, 2018) — Jomo Thompson ('00 College of Arts and Sciences, 2020 College of Business and Economics) and Dawn Walters ('88 College of Communication and Information) are both proud of their accomplishments as head coaches.

But to do it at their alma mater means everything to the pair.

Thompson won two national titles as a UK cheerleader and has coached the cheerleading team to 10 of its 22 Universal Cheerleaders Association titles. Walters, who was a member of UK’s first cheerleading title squad in 1986 (and won in 1987), has led the UK dance team to unprecedented heights, and it is now on the verge of its own national championship.

“It is awesome. I’ve been here the whole time, and I think the initial thing that was so cool is when I walked to my office for the first time. I am right around the corner from the old sports information office where I worked when I was a senior in college,” said Walters, a Lexington native. “So getting to come into Memorial, that’s when it hit me. Coming back as dance coach, it felt surreal.”

Thompson, who cheered for two years at University of Florida before transferring to UK, is proud but also welcomes the challenge that comes with leading a program that is the best in the history of the sport. But his coaching tenure did not start out well. UK had won eight straight titles, but failed to win again his first year as coach.

“The pressure the next year was even greater. I felt like I let everybody down, but we were able to win it back the next year and win it the next three years,” said Thompson, who had planned to get his master’s degree in business before coaching came calling. “I thought I would end up going into some kind of business, but the opportunity came along, and I took it. I’m glad I did.

“I really enjoy seeing the athletes come in as freshmen and mature and find more confidence in themselves and be able stand on their own feet.”

Walters came in with the task of building a program that would measure up to the cheer squad. She had her work cut out for her.

“Since I had cheered before, when I came in (athletics officials) told me what direction they wanted to go,” Walters said. “They said we want the dance team to be super energetic, athletic, very upbeat for performances. At Rupp, there are over 24,000 fans, so they want to keep everything going. They wanted us doing more pom-based hip-hop, a more upbeat style.”

“What has been wonderful over the years is the amount of recognition and publicity we’ve gotten,” Walters said. “A lot of it is social media, but so many people have watched us grow, especially in competition. They’ve seen us become a national contender. People really honed in on that, they’ve watched us the last six or seven years really move up. Now kids want to come to this program and have seen what we’ve done. Fans see that, too.”

Thompson, a UK assistant before taking over in 2002, said he is just trying to carry on the tradition that longtime advisor T. Lynn Williamson ('68 AS, '74 College of Law) built.

“He established the right mindset, the right ideals. And those things, I have basically just piggybacked off of and continued to spread those messages,” he said. “Our program talks about absolute responsibility in everything that you do. We talk about being persistent, we talk attitude, and then winning, those are four key principles our program is based around and have been since T. Lynn started doing this.”

Thompson also knows his squad serves as “ambassadors to the university,” so those are the kind of students he recruits.

“A lot of people focus on competition, and that’s what we’re known for. But our primary focus is cheering at the games,” Thompson said. “That’s what a lot of the kids enjoy. It’s fun to have great seats for football, basketball, volleyball and gymnastics.

“We do community service appearances. We read to kids, do things like God's Pantry, visit schools, anything to help in the community and anything to help UK out, as well. If there is a College of Engineering event and they want the Wildcat or cheerleaders to make it festive, we do that kind of stuff. We’re not an NCAA sport, per se. We’re more than a sport.”

While the two don’t think about it in the moment, they are also trailblazers as the first African-American coaches in their sports at UK.

“You don’t consciously think about it, but you might be paving that way,” Walters said. “Yeah, African-American cheer and dance coach, that’s what I want to go into. Any of my dancers coming through, they can go, ‘Yeah I can do it, too.’”

Thompson said UK had an African-American assistant coach when he was a student, so being a pioneer never occurred to him.

“I hadn’t really thought about it that way. I’m just happy to be here, and I want to make sure Kentucky cheer continues to excel. So that’s my primary focus,” he said. “But if it inspires some other African American to get into that field or if they want to talk to me, I’d be happy to do that as well.”