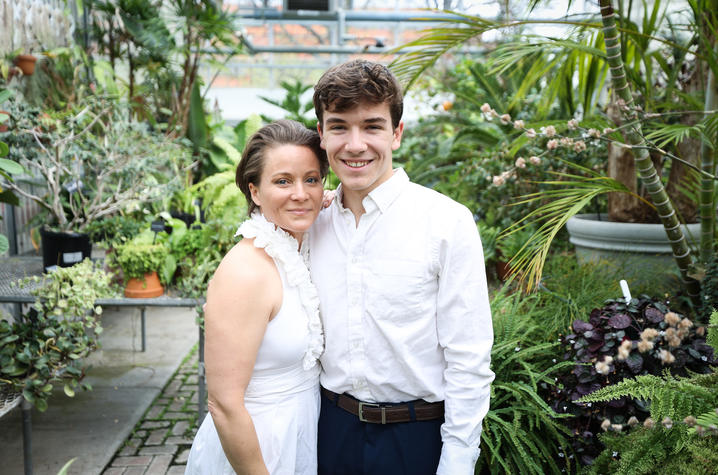 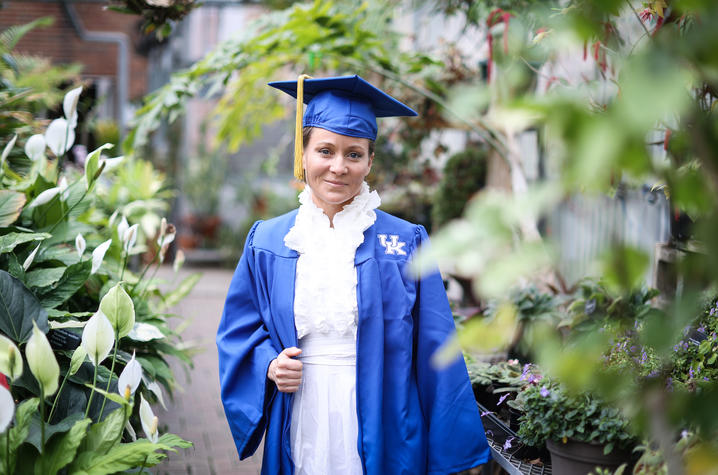 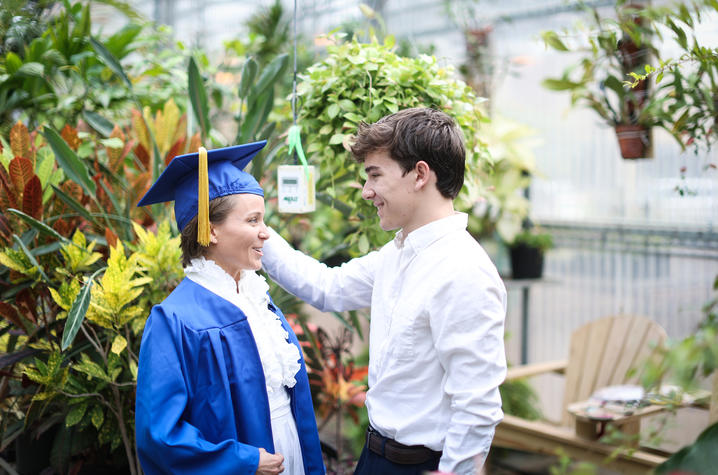 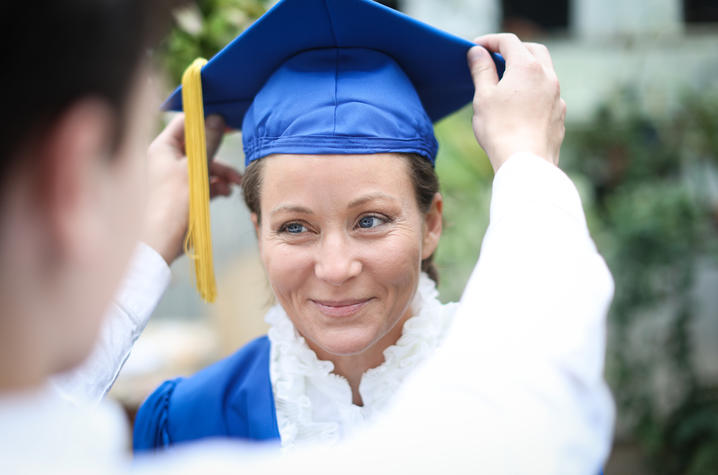 “They give the best tours,” she says with a big knowing smile. That tour sparked curiosity and self-reflection, prompting Sanchez to think about herself for the first time in a long time.

Being recently divorced, Sanchez needed to re-enter the workforce after more than 15 years but was apprehensive about explaining the gaps in her resume.

“It just got in my head: what if I update my skills? What if I pick what I really want to do? I’ve had all these years as an adult to think about what I care about in this world and what I’d be good at. So, I chose landscape architecture.”

That fall, Sanchez enrolled at the University of Kentucky.

What legacy do we want to leave behind for our children? And what habits do we want to model for future generations? These are questions Sanchez became focused on four years ago.

Based in Wilmore, Kentucky, Sanchez is raising four teenagers. And while she may be the one in the classroom, her children are learning just as much from her.

She grew up a self-described “military brat,” crisscrossing the country and spending years living overseas. She graduated from DePaul University in 2001 with a degree in Latin American studies and Spanish. She then took a job in financial aid at Texas A&M University while her husband completed his studies.

From there, his military career took the family across the world to different bases. During those years, Sanchez put her career aside to stay home, homeschool her children and manage the household.

She jokes that she was the stereotypical stay-at-home mother, baking muffins and driving her kids to sports practices. Her four young ones were used to having their mom home every day, sharing the events of their days and spending quality time together.

In time, the family moved to Kentucky to settle down. Her kids were getting older and it was becoming more difficult to keep uprooting them to move somewhere new.

Then in 2017, Sanchez filed for divorce.

“It was a really hard time," Sanchez said. "There was addiction involved. The situation was worsening and I had to do something. It was super scary because I didn’t have a resume for all those years. I’d been super busy with kids and family stuff. I will never be prouder of myself than when making that decision because I was doing what I thought was right even though I didn’t know I’d sustain that. I decided, being so educationally focused with my kids, to go on a college visit to preview this bright collegiate future for my kids one day.”

Those series of events are what brought them to campus for the tour that changed everything.

Sanchez had grown passionate about the importance of creating green spaces for communities; somewhere for parents to take their kids to safely play and explore. She understands that not everyone can afford to drive to a park or take a fancy vacation, but community parks within walking distance can make all the difference.

“I love outside. I feel like we should all be outside more. Outside just helped me get through those hard times. When you’re having your worst day there’s still a little bird in the tree outside; something is still blooming. You can count on nature to keep doing its thing even when your day was shutting down. I thought about building environments while being really cognizant and careful about their ecology and edifying it instead of breaking it down.”

Come August, Angela was the one hanging a UK parking pass on her rearview mirror, ready to pursue a degree in landscape architecture.

She browsed the master’s programs, noticing that landscape architecture was regrettably missing from the list. Sanchez was determined to complete the bachelor’s program in under four years, but the sequence of courses meant she would be cemented in the four-year cycle. But she was committed, and her children were ready to help support her.

During her time back in school, the whole family gave a little to make things happen. Her eldest son became responsible for taking his younger siblings to school and practices, and her children put their cooking skills to the test.

“I had to become a macro mom instead of a micro mom. I had to look at the big picture and what would help our family. I think of it as transplanting our family tree to a better spot. I just had to do that no matter what details had to change. Thank goodness I had taught my kids enough about cooking! If you want something, you’re going to have to make it yourself. You need to get yourself up in the morning and get yourself on that bus. Everyone got a lot more self-reliant. I don’t regret it.”

It hasn’t been easy, taking on a second, four-year degree 20 years after earning her first, but to Sanchez, it’s been worth it in spades. She says she couldn’t have made it through her degree program without leaning on the support from her community members in Wilmore and at UK. Learning how to ask for help was one of the largest hurdles Sanchez faced when beginning the landscape architecture program.

“Growing up as a military brat and wife, you can become so self-reliant to a fault and you try to handle everything on your own without asking for help. I learned how to ask for help. I absolutely could not have done this without help, big and small, from friends. It was an actual act of discipline to just tell people so they could help.”

The support she received from faculty and fellow students within the College of Agriculture, Food and Environment helped to make things easier at home. On many occasions, in between her children’s doctor’s appointments, they would accompany her to campus and sit in on a class in the E.S. Good Barn or Ag North building.

“I tried to be at everything I needed to be at but there were times that I had to go to court. I had to miss class and turn in weird notes letting them know. Everyone always worked with me. Everyone was so accommodating and offered extra help.”

Faculty in the college were understanding, knowing students have responsibilities outside the classroom.

“One of the things I learned early on as a teacher at UK is that our students have a lot of life that goes on outside of the classroom," shared Jordan Phemister, a lecturer in the college who taught Sanchez. "These experiences can be enriching, distracting or sometimes intensely challenging. Angela embodies this lesson to the ultimate degree. She has navigated and balanced raising and nurturing amazing children, pursuing a time and energy-intensive major, working outside of school and persevering through personal challenges that would knock many people to their knees. She has succeeded on all fronts with grit, creativity and optimism. We are excited to see the positive impacts she will make in this world, both personally and professionally, as her career in landscape architecture continues to unfold.”

Most of Sanchez's classmates were in their late teens and early twenties, just a few years older than her own kids. Over time, they helped her figure out new classroom technologies, like Canvas and GroupMe.

“It’s taken me four years and I don’t regret it," Sanchez said. "I needed those four years to help me figure out who I am at this point in my life and what the next chapter was going to look like. There was an interesting parallel between me and my mostly-18-year-old classmates. We’re all trying to find ourselves and make our parents proud; I was trying to make my kids proud.”

Her son Cyrus is currently a freshman in the Gatton College of Business and Economics studying finance. His sister will join him on campus in the fall as a student in the College of Engineering. Sanchez hopes they will take advantage of the undergraduate research opportunities as she did.

“I really feel good about my kids going here because of how accessible these resources are to them. And UK is communicating so well.”

Some of the resources Sanchez used on campus, like the UK Counseling Center and Big Blue Pantry, based in the UK Office for Student Success, enabled her to finish her degree.

“I went to Big Blue Pantry as a staple. That was really helpful to my family. Money is so tight and 25-30 dollars means you now have gas money. Those little things really helped to make it possible. It was almost impossible. I feel like I had miracles. All I needed was for it to be possible and UK made it possible.”

Sanchez will graduate this weekend with a bachelor’s degree in landscape architecture from UK. And she's already crossed another big task off her list: she's accepted a job here in Lexington.

“I couldn’t do this big thing without people in Wilmore, other mothers and my fellow classmates that helped me learn new technology. I needed my kids, too. In my mind our roles were really traditional: ‘I’m the parent, I help you.’ But it wasn’t like that anymore. And I’m glad I showed that to my kids because life is a lot better when you can use your community. Self-reliance is important, but community is too.”