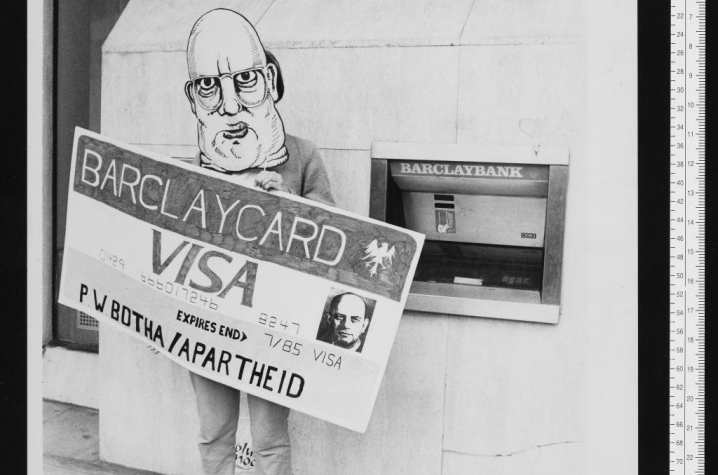 LEXINGTON, Ky. (Nov. 2, 2010) - The world's hit to South Africa's wallet spelled the end for the relentless apartheid leadership in the sixth installment of seven-part film series "Have You Heard from Johannesburg," sponsored by the University of Kentucky's College of Arts and Sciences."

"The Bottom Line" tells the story of the first international grassroots campaign successfully using economic pressure to help bring down a government.

As South Africa's apartheid government remained control, despite the previous years of international action, the world began to recognize its dependence on Western financial connections.

Citizens all over the world, from Polaroid employees to a General Motors director, from student account-holders in Barclay’s Bank to consumers who boycotted Shell gas, all refused to let business with South Africa go on as usual.

Boycotts and divestment campaigns brought the anti-apartheid movement into the lives and communities of people around the world, helping everyday people understand and challenge Western economic support for apartheid.

Faced with attacks at home and growing chaos in South Africa, international companies pulled out of the region in a mass exodus, which caused a financial crisis. The world made it clear to the now-isolated South Africa that its apartheid days were numbered.

Ikenna Uzuegbunam, assistant management professor in the Gatton's School of Business and Economics, will discuss the role of international corporations and their employees after both showings of "The Bottom Line."

The series spans the world over half a century, beginning with the very first session of the United Nations and ending in 1990 – when, after 27 years in prison, Mandela toured the world as a free man.

A&S will show each film in sequence on Thursdays at 3:30 p.m. and 7:00 p.m. in Kastle Hall 213 from Sept. 30- Nov. 11. Parents, students, alumni, children and other community members are welcome to attend one showing or all of them. Each film can be viewed individually. Parking is available at Parking Structure # 2 for the 7:00 p.m. showing.