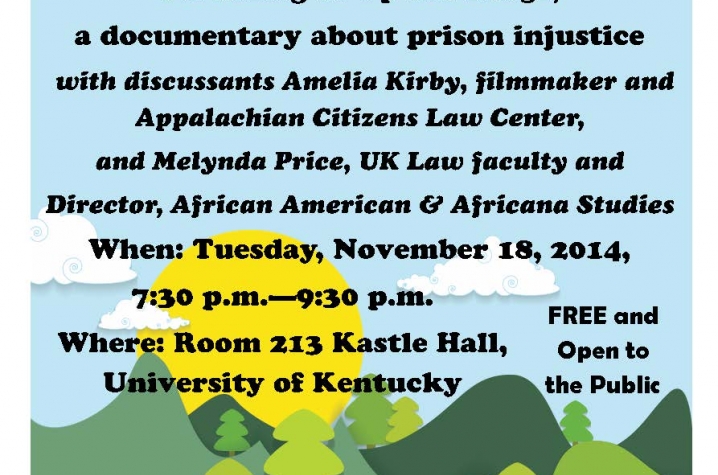 LEXINGTON, Ky. (Nov. 17, 2014) — The University of Kentucky Appalachian Center will continue its Appalachian Forum with a screening of "Up the Ridge" at 7:30 p.m. Tuesday, Nov. 18. A discussion will follow with the film's co-producer Amelia Kirby, development director of the Appalachian Citizens Law Center and Melynda Price, director of the African American and Africana Studies Program and College of Law faculty member.

The event will be held in Room 213 of Kastle Hall and is free and open to the public.

"Up the Ridge," an award-winning documentary released in 2006, focuses on American prison injustice and takes viewers inside Appalachian prison Wallens Ridge. Wallens Ridge State Prison is located in Big Stone Gap, Virginia, and was the region's newest prison at the time of filming in 1999.

The film illuminates the social impact on incarcerated individuals and their families when inmates are forced to move long distances from, for example, urban New Jersey to rural Appalachia. It also documents the social impacts that supermax prison jobs have on workers and their families. Supermax prisons have been proposed as an economic development strategy for Appalachian communities, particularly on mountain top removal post-mining sites.

Kirby co-produced the film with Nick Szuberla and now works at the Appalachian Citizens Law Center, located in Whitesburg, Kentucky. Kirby and Szuberla also co-founded a radio program out of Whitesburg on Appalshop's WMMT 88.7 called “Holler to the Hood,” which enables families of the incarcerated to send messages across the miles.

The screening and discussion are part of the UK Appalachian Center's 2014-2015 Appalachian Forum speaker series on the intersections of civil rights, labor and environmental social movements in Appalachia.

The UK Appalachian Center works to strengthen relationships between all colleges at the university and the communities in the 54 Appalachian counties of Kentucky by facilitating community partnerships in collaborative projects documenting and addressing the region’s particular contributions and challenges in a global context.

For more information on the event, please contact erin.norton@uky.edu or visit the Appalachian Center website at https://appalachiancenter.as.uky.edu/.

'Behind the Blue': Joe Reed Discusses Institutional Transparency and Accountability