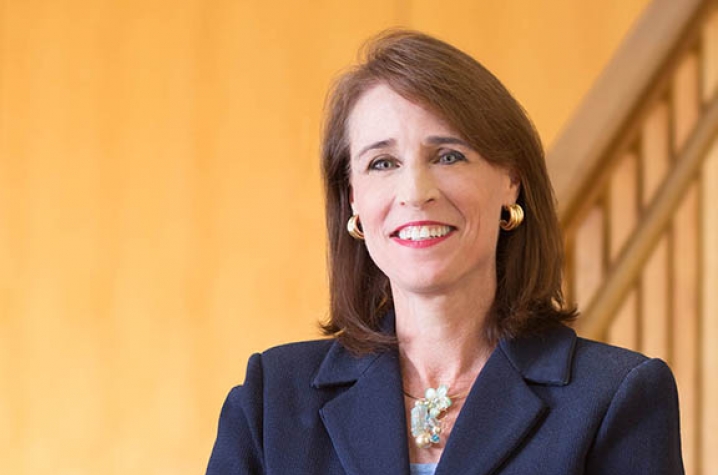 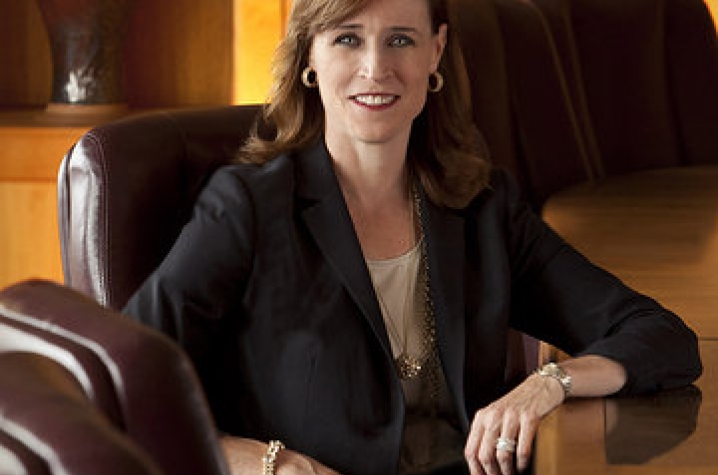 LEXINGTON, Ky. (May 2, 2013) ― University of Kentucky President Eli Capilouto Thursday announced that Dr. Christine Riordan ― current dean of the Daniels College of Business at the University of Denver ― has accepted an offer to become UK's next Provost.

Dr. Riordan, 48, will begin at UK this fall, subject to approval from the university's Board of Trustees at its May 14 meeting. She was one of three finalists for the position of Chief Academic Officer, who visited the campus last week for a series of meetings and public forums. Interim Provost Tim Tracy will return full time to his role as Dean of the College of Pharmacy.

"Dr. Riordan’s candidacy stood out for so many people I talked with for a number of reasons," Capilouto said in making the announcement. "Her compelling communications skills, her deep understanding of higher education’s future and how she has led a college to prominence, and the sense of excitement her candidacy generated as she discussed her commitment to working collaboratively as we build upon our missions of education, research and service."

Dr. Riordan will replace Kumble Subbaswamy, who left UK last year to assume the position of Chancellor at the University of Massachusetts Amherst.

“I am honored to work with President Capilouto whose ambitious vision for the University of Kentucky and Commonwealth brought me here,” said Dr. Riordan. “The energy, strength, and commitment of the UK community are clear. It will be a privilege to serve the distinguished UK faculty, staff, students, and alumni, and become part of this outstanding institution and community.”

In addition to praising Tracy, who has led UK's efforts to implement a new values-based financial model, Capilouto also thanked the Provost Search Committee, which has led search efforts for 10 months, for its collaborative approach that "exemplified the best of what we are as an institution – a group of scholars, professionals and outstanding students, working across disciplines in partnership to achieve an outstanding result."

Provost Search Committee Co-Chairs Charley Carlson and Mike Reid said Riordan "has both the compelling vision and the track record as a scholar and academic administrator to join President Capilouto in leading UK during both a time of tremendous challenge and opportunity. The fact that we attracted three incredibly qualified candidates is a testament to who we are as an institution and what has already been accomplished. President Capilouto has selected someone who we believe can help us build on that history to chart a new and exciting path forward for UK and the Commonwealth we serve."

Dr. Britt Brockman, chairman of the university's Board of Trustees, said he was struck by Riordan's "commitment to higher education and UK's potential to lead as well as her ability to help articulate a compelling vision as we move forward with a continued revitalization of our campus and transformation of how we provide education, research and service in the 21st century."

“The Provost Search Committee put in an incredible amount of collaborative work and effort, and we were gratified by the caliber of candidates who came forward, attracted to the institution and the quality of the faculty, staff and students,” said Lee Blonder, a search committee member and chair of the University Senate Council. “In Dr. Riordan, I believe we have someone who will engage with the faculty in a spirit of partnership that honors our commitment to shared governance and our shared goal to move the university forward as an institution of choice for the best undergraduate and graduate students as well as outstanding faculty researchers and teachers.”

Dr. Riordan has experience as both a leading scholar in her discipline and as an administrator, who has excelled in creating innovative programs domestically and internationally along with sustained excellence in fundraising. Under her direction, Daniels now raises over $14 million each year in private and corporate funds. Additionally, the Daniels endowment has increased over 50 percent from $70 million (2008) to over $106 million (2013). And, they are completing a $100 million campaign for the college in 2014. She is a frequent national commentator on leadership development and workplace diversity, and was recently elected to the board of AACSB, the international accrediting association for business schools. Her articles and interviews have appeared in Forbes, CNBC, Wall Street Journal, MarketWatch, CareerBuilder, Huffington Post, Politico, and the Harvard Business Review.

The Daniels College of Business is the eighth oldest business school in the country with a global network of over 33,000 faculty, alumni, students and staff, and is internationally ranked as one of the top business schools in publications such as Businessweek, The Financial Times, U.S. News & World Report and Forbes.

The University has more than 50 centers and institutes at DU performing highly focused research and scholarship, and is home to a broad range of colleges including the internationally ranked Korbel School of International Studies, the Sturm College of Law, the Graduate School of Social Work, the Morgridge College of Education, as well as engineering and natural sciences.  In 2012, DU hosted the first of four presidential debates, internationally televised with over 67 million viewers throughout the world.