Denegri, University of Kentucky extension nutrition education program assistant, hated to disappoint Olivia, but she had other plans for that evening’s class. On the menu were “colorful quesadillas.” Olivia thought that might be OK too.

Teen Cuisine is a series of six cooking and nutrition lessons presented by Fayette County family and consumer sciences extension for middle-school students. This particular series of classes was done in partnership with the Down Syndrome Association of Central Kentucky, or DSACK. The six young participants came accompanied by a parent and left having learned a new kitchen skill and how to prepare a simple recipe.

The idea came out of a lesson about water Denegri taught when the Special Olympics came to Eastern Kentucky University a few years ago. When people there realized that the UK Cooperative Extension Service offers classes that could help their child become more self-reliant, a new clientele presented itself to Denegri. Later, when someone from DSACK called and requested cooking classes, she readily agreed, despite the challenges.

“When I first started, I was kind of panicky, because I’ve never worked with children with Down syndrome,” she said. “But I treat them no differently from other middle-school kids. I gave them knives and said ‘We’re going to chop,’ and it took off from there.”

The young cooks use chef’s knives for children, which are sharp but not sharp enough to do serious damage. Every week, they get to take a kitchen utensil home with them.

“I use the same reinforcement items that I use for my regular classes, because they use it, they learn it, and now they’re using it at home,” Denegri said.

Around the extension office’s kitchen, the teenagers all had their assigned duties, with Denegri flipping easily between English and Spanish to offer advice. Some chopped vegetables, some shredded cheese. Sam Elbert, 15, who likes both food and basketball, enthusiastically and confidently chopped a yellow bell pepper, his contribution to that night’s quesadilla. This was the second time he had taken the Teen Cuisine course. As a result, he knew how to make fruit pizza, breakfast burritos, pancakes, tacos and waffles. His mother, Courtney Elbert, was there to help if he needed it, but he did just fine on his own.

“It’s fun for us to do together,” Courtney Elbert said. “I think it’s helping develop his independence down the road. It’s helped me realize he can do a lot in the kitchen if I step back and let him or give him guidance when he needs it.”

Elbert, who is the DSACK medical and community outreach coordinator, said they have received positive feedback from all the families who have been involved.

“This is our second time partnering with Jacqui and the College of Ag. We thought it was a good fit for learning safety and independence and healthy eating,” Elbert said. “The participants have created some social bonds and some friendships that I think will continue.”

Unlike her other middle-school groups, Denegri said these kids will try everything.

“They’ll tell me, ‘I don’t like that,’ but then they end up trying it and liking it,” she said, laughing. “My other middle-schoolers, uh-uh, they’re like ‘no way.’”

The students thrive in the atmosphere of fun and learning. In six classes, Denegri said she can really see a difference in them.

The partnership with DSACK has opened up opportunities for Fayette County Extension to reach other similar groups in the area, such as the Bluegrass Council for the Blind, The Arc of Central Kentucky and Cypress Community Services.

“I love them,” Denegri said about her Teen Cuisine students. “It’s so rewarding, I can’t even begin to explain. It’s amazing.”

UK Cooperative Extension Service is part of the UK College of Agriculture, Food and Environment, which is dedicated to improving people's lives through excellence in education, research and outreach. 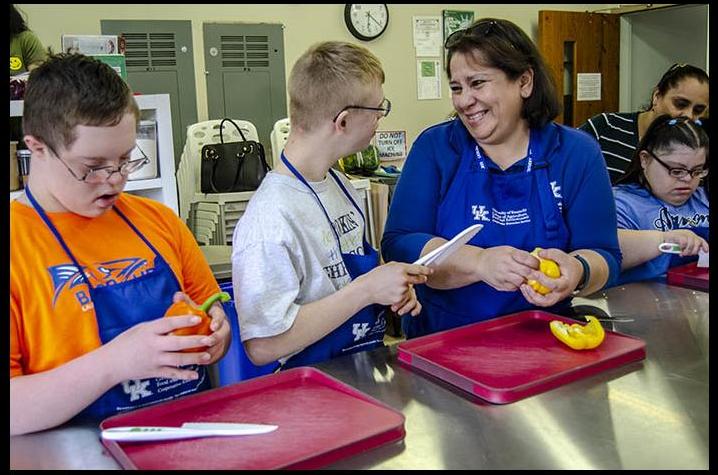