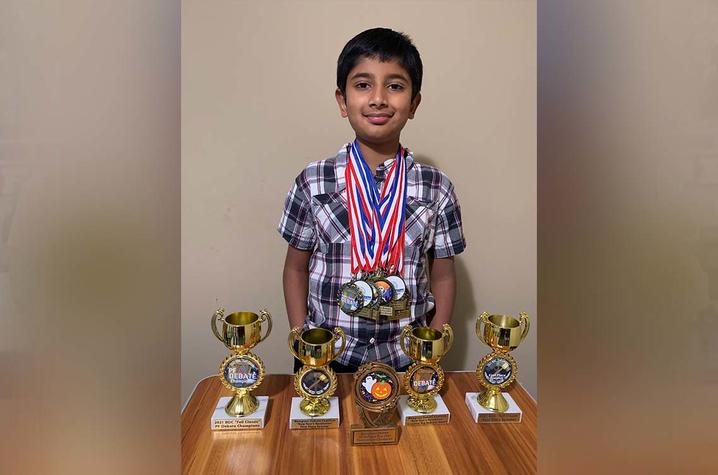 Fifth grader Aaron George is one of many students across the state taking advantage of the BDC, a first-of-its-kind project.

LEXINGTON, Ky. (Feb. 4, 2022) — When Aaron George first joined the Bluegrass Debate Coalition (BDC) in September 2021, he was feeling nervous to start something new yet excited to meet other kids. Toward the end of that debate season, he walked away with more confidence, more friends and more debate accolades than he had expected.

The SCAPA (School for the Creative and Performing Arts) at Bluegrass fifth grader is one of many students across the state taking advantage of a first-of-its-kind project. The BDC, overseen by the University of Kentucky's championship Intercollegiate Debate Team housed in the College of Communication and Information, launched in September 2020. The organization works with Kentucky schools to make competitive debate available to all elementary, middle and high school students. Its goal is to increase academic performance, enrich college and career opportunities and provide the intellectual and networking tools for youth to thrive as active, responsible leaders in their communities.

For Aaron, the BDC presented a fun challenge and a way to overcome the loneliness he felt from two years of online schooling. What started out as a once-a-week after-school activity quickly became a daily passion where he spent several hours a week practicing the basics of debate with his classmates.

These workshops and Aaron’s performing arts educational background have laid the foundation for his debate success. Although he attends SCAPA, which boasts 24 consecutive years as the Kentucky High School Speech League’s Junior State Speech Champion, SCAPA’s program is for middle school students and doesn’t focus on debate. As an elementary student interested in debate, Aaron had to find another way to compete. Joining the BDC gave him a way to use the drama skills he gained from SCAPA to perform well as a debater. Despite Aaron not being part of the school’s program, SCAPA Principal Beth Randolph has praised the excellent student he is and his success with debate, wishing him luck in his future competitions.

Through the BDC, Aaron was able to meet kids his age who helped facilitate his growth not only as a scholar but as a person as well. His mother, Lisa George, said what once used to be a sensitivity to not accepting other people’s way of thinking has turned into carefully crafted arguments using supporting evidence. Since her son joined the BDC, she said the most important lesson he has learned has been about “being considerate, a good person and a good citizen.”

“I have learned how to boost my confidence, how to be more helpful toward other people and how to not worry about being perfect and just try my best,” Aaron said. “I was able to build confidence among my team. Like I knew that I had a good team to back me up during debates, so what happened was that I built more friendships in the debate. They’re all teammates, friends and comrades to me. They’re all people who help me get through these debates that I do.”

Learning how to work well with others is what led Aaron to a team-winning streak. After recruiting his childhood friend to debate as his teammate, the pair went on to win first place as a team during their first debate, the BDC’s All Hallow’s Eve. They then competed in the Wilson Wyatt Debate League and the BDC’s Fall Classic against older students where they placed second and first as a team, respectively. Most recently, Aaron debated with a different teammate to place second in the BDC New Year’s Resolution contest.

Although Aaron has been a valuable teammate, his debate skills as an individual are also award-winning. In his debut debate, he placed sixth on the Top 10 Speaker’s list. In the Wilson Wyatt debate, he placed eighth. In the Fall Classic, he placed first among middle and high schoolers. And in the New Year’s Resolution contest, he won first place in the crossfire individual debate and first place overall best speaker.

To date, Aaron has consistently been among the highest ranked speakers in his debates and has won every single debate he has done except one, leaving him with a 12-1 record. He has racked up impressive recognition throughout the first half of the debate season and is expected to shine even more leading up to the regional championship tournament in March.

“Aaron is so deserving of recognition and respect,” Bill Eddy, director of the BDC, said. “He works hard, takes coaching really well and he is just a great person to have around. I am glad that debate is one of his activities to feel valued and respected and less stressed—giving him something fun to look forward to.”

Despite being on a winning streak, Aaron knows he still has a lot to learn. But seeing as his favorite part of the BDC is having fun with his friends and his lessons, he’s looking forward to sticking with debate for years to come.

To learn more about the BDC, visit https://bluegrassdebate.org/.