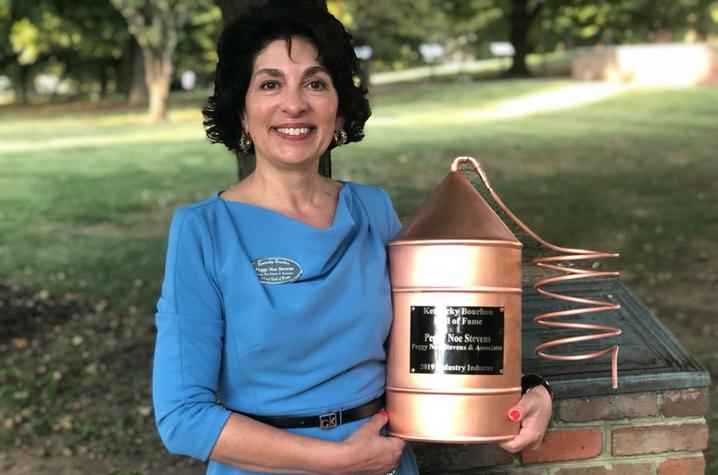 LEXINGTON, Ky. (Dec. 6, 2019) ­— Peggy Noe Stevens, a University of Kentucky College of Communication and Information (CI) alumna, was recently inducted into the Kentucky Bourbon Hall of Fame. She is one of only nine female inductees into the hall of fame.

“It feels fabulous and fulfilling to be inducted into the Bourbon Hall of Fame, as this designation is voted on by the leaders of the Kentucky Distillers’ Association,” Stevens said. “To be a female inducted gives me great hope for the future of women.”

Since graduating from UK in 1987, Stevens has become the first female master bourbon taster. She travels worldwide to conduct tasting and hosts educational and entertaining whiskey seminars. “UK prepared me for my career. My focus was on public relations and communication in college, and I believe that foundation of learning has fueled my entire career,” Stevens said.

In 2011, Stevens founded the Bourbon Women Association, the first female spirits consumer group. When asked why she was inspired to found Bourbon Women, Stevens said, “Being from Kentucky, I knew that women were just as passionate about America’s native spirit as men. The industry was missing this market … We needed to begin a conversation.” The organization provides both consumers and professionals in the industry with educational and networking opportunities. There are currently eight branches, including Louisville, Chicago, Indianapolis, New York, Northern Kentucky/Cincinnati, Tennessee, Texas and Washington, D.C, with members in 26 states nationwide.

Stevens is president and founder of Peggy Noe Stevens and Associates, an image branding and experiential marketing firm. Alongside two other women, Stevens pioneered the development of the Kentucky Bourbon Trail, a staple of Kentucky tourism that attracts more than 1 million visitors every year. She’s designed over two dozen distillery brand experiences for consumers, with clients like Jim Beam, Michter’s, Lux Row and Kentucky Peerless. She also served on the National Advisory Board for CI at UK.