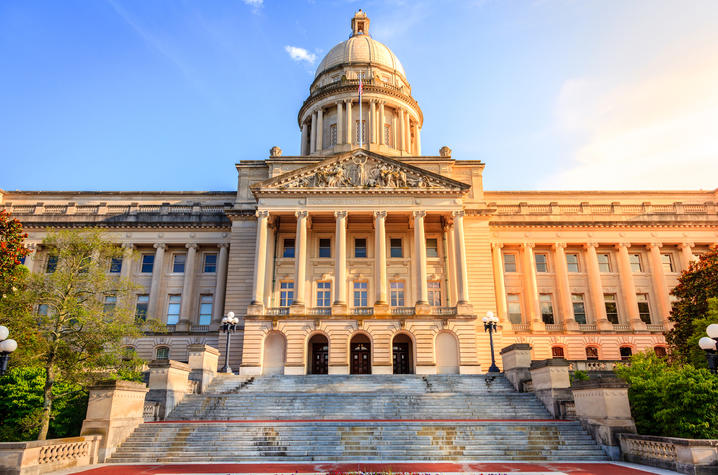 LEXINGTON, Ky. (June 27, 2019) — It's been 90 days since the Kentucky General Assembly closed the 2019 session, which means several new laws will go into effect across the Commonwealth today.

Below is a list of the laws that University of Kentucky experts believe will have the most impact on Kentuckians.

House Bill 84 will ban telephone solicitations that misrepresent the name or telephone number in caller identification services. It also increases fines for second offenses and allows for civil lawsuits against violators.

Senate Bill 150 will allow concealed firearms to be carried without a concealed carry permit. The measure will allow Kentuckians age 21 and older, who are legally eligible to possess a firearm, to carry a concealed weapon without a license in the same location as people with valid state-issued licenses. State law did not change regarding where guns can be carried. They are still prohibited in a number of locations including schools and college campuses where banned. Carrying without a permit will not be allowed where prohibited by federal law.

Senate Bill 57 expands the number of Kentucky residents eligible to have low-level felonies expunged from their criminal records. The move expands discretionary expungement to all Class D felonies with some exceptions such as stealing in office, child abuse and sexual abuse. The measure includes a five-year waiting period to apply for expungement, a $250 application fee and provisions for prosecutors to object and judges to reject the applications.

"Kentucky has one of strictest felon disenfranchisement laws in the country — where felons lose the right to vote for life. But as I chronicle in my new book, a few years ago Kentucky lawmakers eased the rule for some felons by passing an expungement bill, thanks to the advocacy of one courageous individual," Joshua Douglas, a professor in the College of Law, said. "This year, Kentucky lawmakers expanded who is eligible for expungement and lowered the fee. It's not perfect, as restoration should be automatic for all felons with no fee, but it's a start."

House Bill 254, also referred to as the "campus free speech bill," requires the state's public universities to affirm they favor a free marketplace of ideas where speech is not suppressed because it's deemed "offensive, unwise, disagreeable, conservative, liberal, traditional or radical." It also expands areas commonly known as "free speech zones" on many campuses to any accessible, open, outdoor venue.

"My general impression is, this law codifies the First Amendment. Meaning, it translates something that is already true into concrete form. The protection of free speech has implied to Kentucky since the 1920s," Paul Salamanca, a professor in the College of Law, explained. "Over the years, the courts have elaborated on what the First Amendment protects. This bill captures that and requires universities to be mindful of the First Amendment. This bill simply says, please affirm that you are subject to or aware of the rights protected under the First Amendment."

House Bill 135 will prohibit public agencies from requiring that their contractors on public works projects have agreements with labor organizations.

House Bill 2, also called the "kinship care bill," will create a caregiver assistance program for relatives and "fictive kin" — usually close family friends of abused, neglected or dependent children. The measure does this by providing different options to the caregivers based on the level of care they provide. The legislation is designed to address growth in the out-of-home placement of Kentucky children amid the state's current opioid crisis.

“Kentucky is among the nation’s leaders in terms of youth being cared for by a relative. This piece of legislation will go a long way to ensure that these relatives, including fictive kin, receive much needed recognition, supports, and services," Justin Miller, newly appointed dean of the College of Social Work (CoSW), said. "The university has an established history of research and service related to relatives caring for youth in out-of-home care, and we stand ready to continue offering and assessing supports to kinship caregivers in light of this new law.”

Senate Bill 6 requires any executive agency lobbyist compensation to be disclosed. It also bans compensation contingent on awarding a government contract. It provides oversight, in part, by requiring executive branch lobbyists to register and list their clients — something that is already required of legislative lobbyists.

Senate Bill 18, the Kentucky Pregnant Workers Act, makes it unlawful for an employer to fail to make certain accommodations for a pregnant employee and requires employers to provide notice to employees regarding those rights.

House Bill 118, also known as the "Keep Americans Working Act of 2019," will bar someone from having an occupational license suspended or revoked because of delinquency on a student loan or work-conditional scholarship. The measure is meant to help keep people with student loan debt out of poverty and in the workforce.

"I have seen no serious empirical research demonstrating that having an occupational license suspended or revoked is a serious issue when it comes to the student debt issue. My guess is, this law will have minimal effect," Ken Troske, a professor in the Gatton College of Business and Economics, explained. "However, there is a growing body of research showing occupational licensing as having a negative impact on workers, because it prevents a worker moving from one state to another. It would be beneficial to work with other states to establish reciprocity, so workers in Kentucky can work in other states without having to get a new license, and in the same vein, workers can move here."

House Bill 11 bans the use of tobacco, e-cigarettes and vaping devices on public school campuses, in school vehicles and at school activities, beginning with the 2020-21 school year. School districts would have up to three years to opt out of the ban should they choose. The individual districts not opting out will also be able to set the penalties for violating the ban.