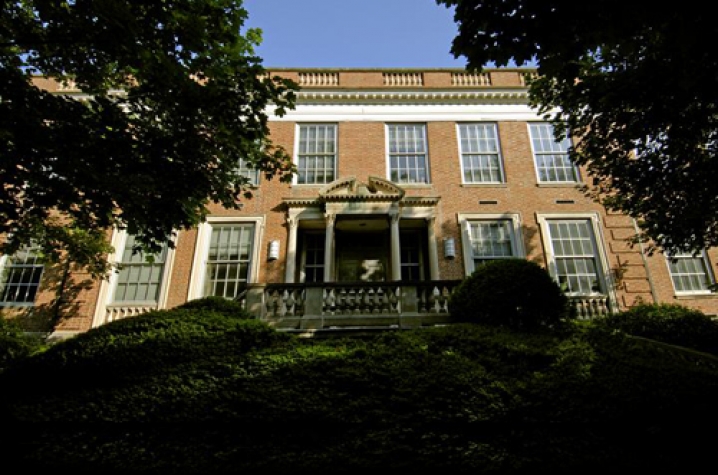 LEXINGTON, Ky. (Oct. 21, 2009) - The news business is in a state of flux, raising questions for journalism students about their career choices. The eighth annual Richard G. Wilson Journalism Alumni Symposium will bring five graduates of the University of Kentucky School of Journalism and Telecommunications back to campus to discuss “The Future of News.”

The symposium will be held at 6 p.m. Tuesday, Oct. 27, in the auditorium of the William T. Young Library.

"Journalism enrollments are holding steady or rising around the country," said Beth Barnes, director of the school. "However, it’s clear that our students realize they will be working in a very different industry than did their predecessors. The panelists for this symposium bring varied perspectives on what the future may look like."

Mark Boxley is the assistant city editor and night breaking news/crime/courts reporter at the Daily Times in Maryville, Tenn. He recently completed a six-month fellowship with the Kiplinger Program in Public Affairs Journalism at The Ohio State University. As part of this fellowship, he produced an in-depth multimedia project on drug crime re-offenders in Blount County, Tenn. He returned to The Daily Times at the end of the fellowship.

During his early days in Maryville, he covered the Great Smoky Mountains National Park, Maryville and Alcoa city governments, and the McGhee Tyson Air National Guard. Boxley’s story chronicling the struggles of a recovering crack addict in 2008 earned awards from the East Tennessee Society of Professional Journalists, Tennessee Press Association and Associated Press Managing Editors competitions. He earned his bachelor's degree in journalism from the University of Kentucky in 2003 and has worked at newspapers in Kentucky, Wisconsin and Tennessee.

She became the editor of Education Week in 1989. The newspaper has a circulation of almost 50,000 and focuses on policy developments in K-12 education. For the past 13 years, she has also served as editor and publisher of edweek.org.

Before joining Editorial Projects in Education, Edwards worked for two years for the Carnegie Foundation for the Advancement of Teaching and, for the nearly 10 years before that, was an editor and reporter at The Courier-Journal in Louisville. She was inducted into the Kentucky Journalism Hall of Fame in 2008. She is a 1978 UK journalism graduate.

She serves on the boards of the Center on Education Policy, the National Center for Public Policy and Higher Education, the Student Press Law Center, the Center for Teaching Quality, and Learning Matters.

Jenay Tate graduated from the journalism program in 1979 and returned home to Norton, Va., and the family business. The Coalfield Progress had been owned by her family since 1924. Until recently, she spent her career as a reporter, managing editor and then editor at The Progress.

In November 2005, financial hardship forced the family to sell three small community newspapers in the heart of the Appalachian coalfields. She has remained as publisher over The Coalfield Progress, The Post in Big Stone Gap and The Dickenson Star in Clintwood.

She was the first recipient of the Virginia Press Association's D. Lathan Mims Award, the community service honor given to the editorial writer of a newspaper under 40,000 circulation that promotes Mims' vision of the role of the editor: active and caring, writing editorials that reflect skill in writing, clarity of position, fairness in handling issues and vision of the community's needs, both present and future. Tate has served on the Virginia Press Association board and various committees and was a founding board member of the Virginia Coalition for Open Government.

Williams was editor of the Kentucky Kernel and graduated from UK in 1996. After graduation, he worked as a bureau chief for the Herald-Leader and as a reporter for the St. Louis Post-Dispatch and the Centre Daily Times in State College, Pa.

Tara Pachmayer will serve as moderator of the panel.  She is a 1999 University of Kentucky graduate with a degree in journalism.

After graduation, her first job in television was as a sports producer at WKRC-TV in Cincinnati. After two and a half years, she moved to Memphis to be a sports reporter/anchor at WREG-TV, covering the NBA Memphis Grizzlies, Ole Miss and the University of Memphis in her four years there.

Today she is an Emmy-nominated sports anchor/reporter at WKRC-TV in Cincinnati, her hometown. She recently won an award from the Society of Professional Journalists for "Best Feature" in Ohio.  She is the 2009 Southern Ohio Leukemia Woman of the Year and raised almost $80,000 for leukemia research in a 10-week period.

The annual journalism symposium is named in honor of Richard G. Wilson, longtime education and political reporter for the Courier-Journal who was inducted into the Kentucky Journalism Hall of Fame in 1999. He served as interim director of the School of Journalism and Telecommunications in 2002-03 and initiated the symposium during that year. During a long and distinguished career, he was recognized as one of the best reporters in the state.

For more information about the event, contact Mike Farrell in the School of Journalism and Telecommunications at (859) 257-4848.