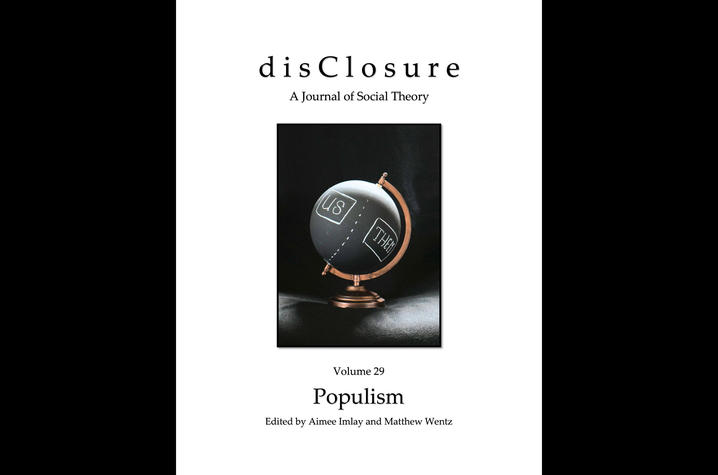 LEXINGTON, Ky. (Aug. 19, 2020) — The editorial collective of disClosure: A Journal of Social Theory announces the release of its 29th volume, available on the journal's website. The issue focuses on theories of populism and brings together a wide range of perspectives relating to the phenomenon, experience and study of populism.

The recent uptick in populism signals political, economic and/or social unrest across the globe; yet populism remains a phenomenon that is difficult to define. The goal with this volume is not to define populism. Instead, this issue engages conversations about the types and origins of populisms, as it is the editors’ belief that the development and definition of populism is both historically and socially contingent.

An annual thematic, graduate student-led, refereed publication, disClosure: A Journal of Social Theory is dedicated to investigating and stimulating interest in new directions in contemporary social theory. The disClosure collective operates in conjunction with the University of Kentucky’s Committee on Social Theory in the College of Arts and Sciences. For more information on the committee, please visit: https://socialtheory.as.uky.edu/.

This volume includes interviews from five scholars of populism and political theory: Paulina Ochoa Espejo, Chip Berlet, Maria Pía Lara, Kenneth Roberts and Nancy MacLean. These interviews cover subjects as diverse as the importance of a conceptual distinction between types of populism, the relationship between billionaires and the erosion of liberal democracy, right-wing extremism, the emergence of populism in the United States, and the link between “the People” and populism. The articles, artwork  and poetry contained in this volume illuminate conceptualizations and understandings of populism as well as the historical and social conditions that foster populism. Topics include left-wing populism in the United States, the relationship between populism and truth, nationalpopulism and the theoretical and ontological roots of authoritarian populism.

The online journal has a robust worldwide readership due in part to disClosure’s open access policy but also to the quality of its content. Articles from disClosure have been downloaded more than 143,300 times, and more than 21,000 of the downloads have occurred in the past 12 months. Geographically, nearly half of disClosure’s readers are in the United States, Britain and Canada. People in such non-English-speaking countries as China, France and Germany, however, also frequently access disClosure articles. Locations of internet connections show that readers are affiliated with a number of institutions, including Harvard, Columbia, Oxford and Cambridge. Those interested in more information about the global reach of disClosure can view the readership map on the journal site.

The call for papers for Volume 30 is forthcoming. Stay connected with disClosure by following @disClosureatUKY on Facebook and Twitter.

DisClosure is one of the open access journals published on the University of Kentucky Libraries’ UKnowledge platform. Faculty and students from the UK community are welcome to contact Adrian Ho to find out about UK Libraries’ resources and services for online journal publishing.