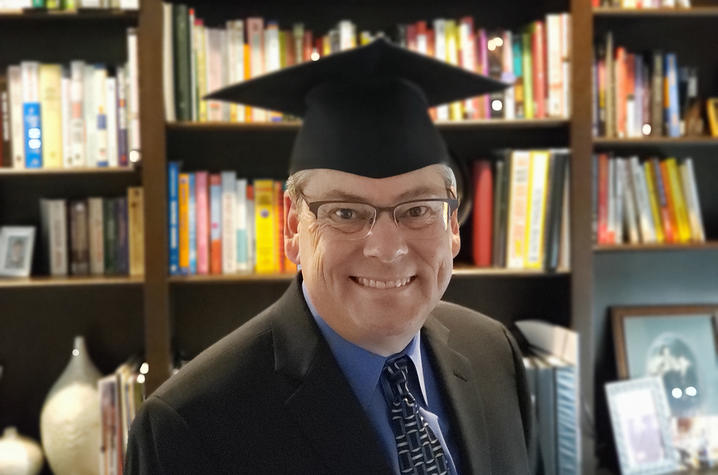 With the help of Project Graduate, from his home in Arlington, Texas, Benjamin Scales started what he couldn’t finish 30 years ago.

As 2020 comes to a close and we prepare to turn the page on the calendar, it’s inevitable to think about what you have accomplished.

Did you live up to your expectations? Or did you fall short?

Some of those answers may depend on how you define success. Benjamin Scales has been chasing his definition for nearly 30 years.

“Although I have attained ‘success,’ some small part of me always felt like a failure,” he said.

It was fall of 1984, and Scales was a freshman at the University of Kentucky extension campus in his hometown of Paducah.

At the time, he was a model student — eager to learn and give back. “I was active in volunteer work. And in my sophomore year, I was named class president.”

In an effort to broaden his horizons, Scales said goodbye to Paducah and moved to Lexington ahead of his junior year.

“As a 19-year-old, I was not mature enough to make good decisions,” Scales recalled. “I was away from home for the first time, and I made many of the mistakes that inexperienced young people typically make.”

Those mistakes had consequences.

His grades suffered — resulting in a .8 GPA. And in 1989, Scales left UK without a degree and without a plan for the future.

“I saw that others were successful in completing their degree program, and I had failed — miserably,” he said. “By not earning my college diploma, I felt like less of a person.”

Years went by — 30 years, to be exact. But that feeling of failure remained.

“Even after all of these years, that traumatic feeling of loss has never lessened or subsided.”

But in the decades that followed, Scales persevered.

He has been happily married since 1996. And as the president of Scales Development, a Texas-based roof consulting corporation, Scales holds prestigious credentials in the field of construction.

“My Registered Roof Consultant credential was exceedingly difficult to attain,” he explained. “It requires years of experience, including countless hours of continuing education.”

Completing the certification sparked an idea that was daunting but, for the first time in three decades, seemed attainable. “I thought now would be the best time for me to get back to school and complete my degree.”

With anticipation and apprehension, Scales reached out to UK in hopes of being readmitted.

Project Graduate is a statewide initiative to assist adult learners who have accumulated 80 or more credit hours to finish their bachelor's degree. The program has been active at UK for more than 15 years, and the College of Arts and Sciences has paved the path for returning students, especially with its Bachelor of Liberal Studies (BLS) degree.

"There are many resources available from the university to help make sure Project Graduate students can be successful," Aaron Vaught, associate registrar, said. “Particularly, we offer a Project Graduate Institutional Loan that is the first of its kind.”

Resources extend to one-on-one advising, special registration times and BLS restricted classes. In order to help as many students as possible obtain their degree, an initiative to offer BLS classes online kicked off in the spring of 2018, and more are continually being added.

Courses are also offered in eight-week sections for those who work full time and have other obligations.

With almost 350 students enrolled in the program since 2016, and 221 degrees awarded in that time, the program is helping many students fulfill their lifelong goal of obtaining a college degree.

Additionally, the Commonwealth has bold goals, and one of them is to reach 60% college degree attainment by 2030. UK plays an integral role in helping the state achieve success.

“Over the past two years, we have graduated more students through the Project Graduate program than we had graduated in the previous 10,” Vaught continued. “Some returning students may worry that with an institution as big as UK that it would be hard to figure out what to do, but that is why I am here — to help students find their way to a degree.”

With the help of Project Graduate, from his home in Arlington, Texas, Scales started what he couldn’t finish 30 years ago.

He returned to UK, in the online space, on academic probation. Today, after 14 courses and 16 months, he is graduating with a 4.0 GPA.

“The blessing in these mistakes was that I have learned so much from them,” Scales said. “In the midst of a worldwide pandemic and starting a new business venture, my commitment to complete my degree has not faltered.”

Despite his commitment, coming back to college to earn a bachelor's degree in liberal studies was no easy feat. Scales has a demanding schedule, but the Project Graduate program made the process much easier.

“I can't thank UK enough for helping me in the initial stages of this journey. My counselor, LaCrystal Green, has been instrumental in guiding me through various classes. She has truly been my rock from the word go,” he continued. “The online experience has been flawless. This has truly been a life altering transition, and I’m so grateful to everyone that I have encountered along the way.”

Success comes in many forms.

For Scales, it was never about money or power. Instead, his degree represents something more intangible.

“The self-empowerment that comes from being handed that diploma is reason enough to pursue it,” he said. “It is not easy, but the sooner you get started, the closer you are to making your dreams a reality.”

And now his dream — the one he’s been holding onto since 1989 — has come true. “I am a University of Kentucky graduate, and I couldn’t be more proud.”

You can learn more about Project Graduate online.