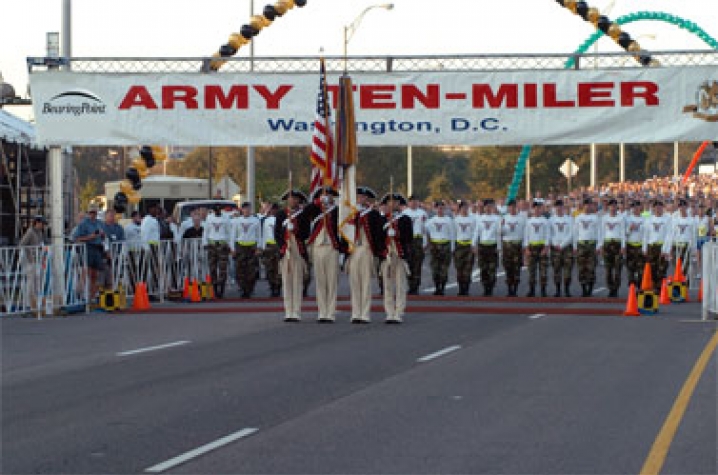 Lexington, Ky. (Oct. 16, 2009) - An Army ROTC team from the University of Kentucky finished third in the ROTC division of the 25th annual Army Ten-Miler race, held Oct. 4 in Washington, D.C.

Running among a record 30,000 people from around the world, the Wildcats of UK Army ROTC competed as a team for the first time in the event. They finished behind Virginia Tech, which won first place among ROTC groups for the second straight year, and the University of Connecticut.

UK runners completed the course with a collective time of four hours, 16 minutes, 44 seconds - a little more than two minutes behind the winning time. Though UK had seven members on the squad, only the top four times count toward the team’s overall time.

With the start of school in late August, UK cadets had only trained for five weeks for the Ten-Miler.

“Next year, we’ll be even better,” said Lt. Col. Jason Cummins, professor of military science for the UK Army ROTC program. “We’ll have the whole year to work on it.”

The Army Ten-Miler is among the largest races in the country. Starting and ending at the Pentagon, the course crosses the Potomac River, running along the National Mall to loop around the U.S. Capitol building, forming a 10-mile circuit.

The event attracts runners from around the world. This year’s race featured competitors from as far away as Brazil, Japan and Korea.