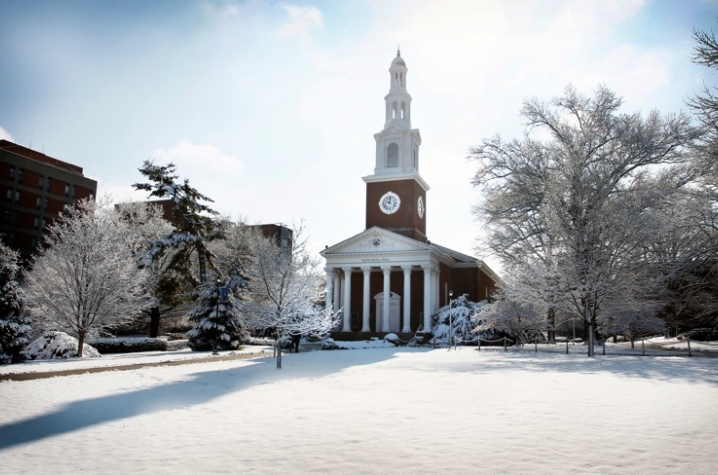 LEXINGTON, Ky. (Jan. 21, 2016) — A thick blanket of snow covering streets, walkways and rooftops can cause some major stress, but it can also be sort of calming, right? Think about it — when it snows, the world gets quieter.

Is it because people dare not to venture outside? That could be part of it. But there's actually some science behind snow's serenity.

"Snow is a pretty good sound absorber," said David Herrin, an associate professor in the UK College of Engineering who studies acoustics.

Herrin said snow absorbs sound a lot like many commercial sound absorbing materials  do, such as fibers and foams used in cars, HVAC systems and other equipment.

Sound absorption is measured on a scale between 0 and 1.

"In the audible range, a couple inches of snow is roughly around 0.6 or 60 percent absorbing on average," Herrin said. "Snow is porous, in some ways like a commercial sound absorbing foam."

Even during a snowfall, when flakes hit everything in their path, they barely make a sound, especially compared to rainfall. That's because snowflakes are not very dense and tend to drift to the ground.

"Rain drops, on the other hand, fall at higher velocities and strike the pavement. You are hearing impact noise," Herrin said. "With snow, the impact force is much less partly due to the reduced speed."

Of course, a winter storm with wind and sleet can cause many to forget snow's own serenity.

Listen to Herrin talk more about how snow makes the world quieter in an interview with WFPL at http://wfpl.org/why-is-it-so-quiet-after-it-snows/.