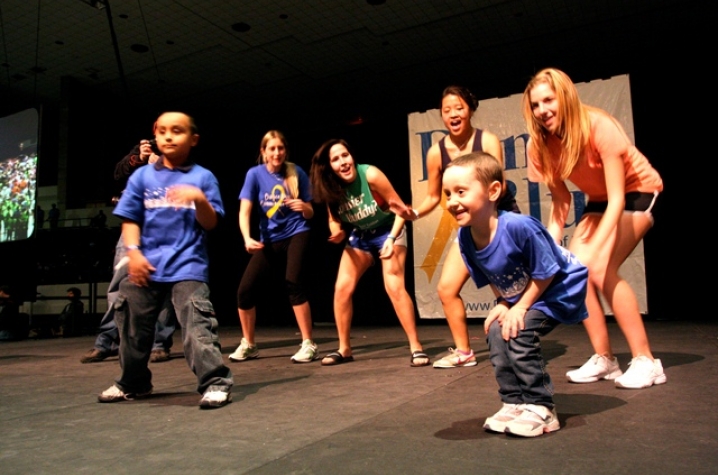 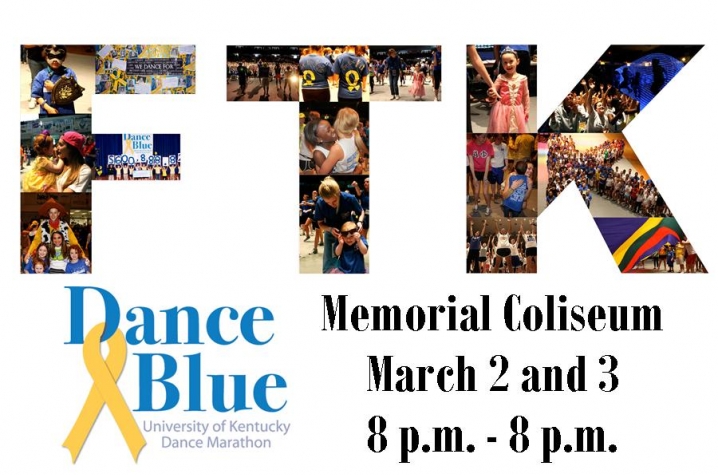 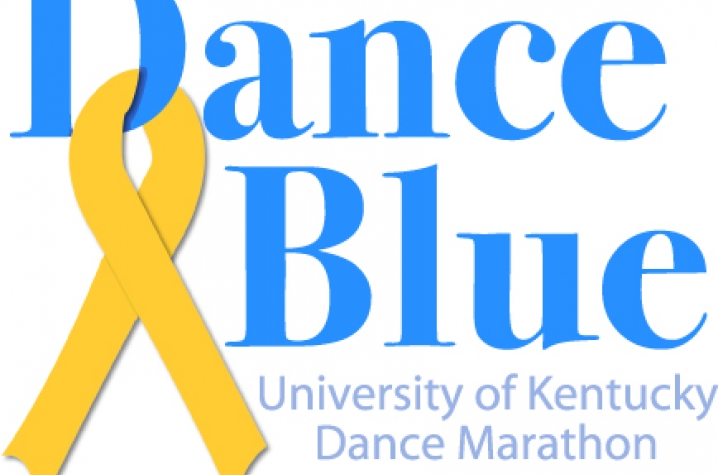 LEXINGTON, Ky. (March 2, 2012) – Ask University of Kentucky students about DanceBlue and you'll see a special twinkle in their eyes. Whether they have danced, fundraised, participated or not, there's something about DanceBlue that reaches to the core of each Wildcat on campus – a sense of pride that rivals that of those seven national championship banners hanging from the rafters of Rupp Arena. Tonight UK's seventh annual dance marathon kicks off at 8 p.m. at Memorial Coliseum.

"I DanceBlue, and stand for all those that can't," Sara-Elizabeth Bush, 2012 DanceBlue promotions coordinator, said, "for all the families and children who are fighting every day. For the kids that never take a minute for granted. Being a part of such a phenomenal organization has allowed my college years to be enriched with so much love, hope and support. DanceBlue has, and always will, have a very special place in my heart.

DanceBlue is a 24-hour, no-sitting, no-sleeping dance marathon at the University of Kentucky to raise money for the Golden Matrix Fund. The Golden Matrix Fund benefits cancer research, children with cancer and their families at the UK Pediatric Oncology Clinic.

DanceBlue originated in 2004 when a forum was led by Jennifer Mynear about the possibility of starting a dance marathon at UK. Mynear’s son, Jarrett died at the age of 13 after an 11 year battle with cancer. Leadership groups around UK's campus were inspired to recruit organizers for this new cancer campaign, and they were met with tremendous support. Organizers found a welcome home for this new event at the UK Center for Community Outreach.

The first DanceBlue marathon took place in Feb. 2006 with more than 30 student organizations and 180 dancers. The marathon raised $123,323.16 for the UK Pediatric Oncology Clinic. That year, DanceBlue broke all fundraising records for a first-year dance marathon event. It became the most successful student-run philanthropy event in UK’s history and has continued to grow over the years. DanceBlue 2011, with 100 teams and more than 700 dancers, was able to raise $673,976.60. Since the first marathon in 2006, DanceBlue has raised more than $2.6 million for the UK Pediatric Oncology Clinic. This year, DanceBlue will have nearly 720 dancers from 120 different student organization teams.

“When I started in 1982 we had two physicians, one nurse coordinator, one research nurse and one lab technician," Waldmann-Ward said. "Now we have six physicians, six nurse coordinators, two research nurses, three social workers and of course the clinic staff of six registered nurses. We are also fortunate to have our own Pharmacist and Pharmacy tech. We have our own clerk that does all the scheduling of patients, for the numerous scans, appointments with other specialties, and keeping up with all the insurance policies. DanceBlue has been an important part of our growth."

Funds from DanceBlue also go towards the Late Effects Clinic which allows physicians to do long term screening of patients. Some families travel to the clinic for treatment on a regular basis for over three years, the average length of treatment for some Leukemia protocols. Unfortunately, even after such extensive treatment, there can be lifelong side effects that stay with patients. Being able to follow up with patients in the Late Effects Clinic years after their treatment helps them to lead normal lives.

DanceBlue provides more than just financial support to the clinic. Students on the DanceBlue committee provide hands on involvement year round. Committee members regularly visit the clinic to play with the children, organize toy areas, assist children in checking in, plan fun events throughout the year and help with emotional support.

Waldmann-Ward feels that when “the (DanceBlue students) are in clinic interacting with the kids it just lightens the mood of everyone.”

Every year, a photo of the previous year’s fundraising reveal was placed in the lobby of the Pediatric Oncology Clinic. It symbolizes not only the impact that DanceBlue has made on the clinic, but the impact that the children and families have made on the students involved with DanceBlue and the campus community as a whole.

The campus and Lexington community are encouraged and invited to participate in DanceBlue. At 7:15 p.m., anyone interested is welcomed to gather in the Student Center parking lot to cheer on dancers as they enter the marathon. DanceBlue officially begins at 8 p.m. in Memorial Coliseum with a pep rally-like atmosphere and learning the 2012 DanceBlue line dance. Each hour of the marathon has a different theme, with coordinated music and activities.

From 4 - 8 p.m. on Saturday, March 3, are known as family hours. Family hours begin with a talent show featuring children from the clinic, a “Celebration of Life” hour to remember those that have lost the battle with cancer and to focus on those that are struggling now and at 8 p.m. the grand finale with the total fundraising amount revealed.

If you are unable to attend DanceBlue, you can watch it live streaming on the Web at www.danceblue.org. Give to DanceBlue here and connect with DanceBlue on Facebook at www.facebook.com/danceblue and on Twitter at twitter.com/UKDanceBlue. Share your thoughts and encouragement with the dancers by using the hash tag #DB12 on your tweets.

DanceBlue is a program housed in the UK Center for Community Outreach (CCO). The CCO seeks to serve, connect and unite the University of Kentucky with the surrounding community in collaborative efforts to promote life-long community service. For more information about the CCO, visit getinvolved.uky.edu/cco. Connect with the CCO on Facebook here and on Twitter at twitter.com/ukcco.