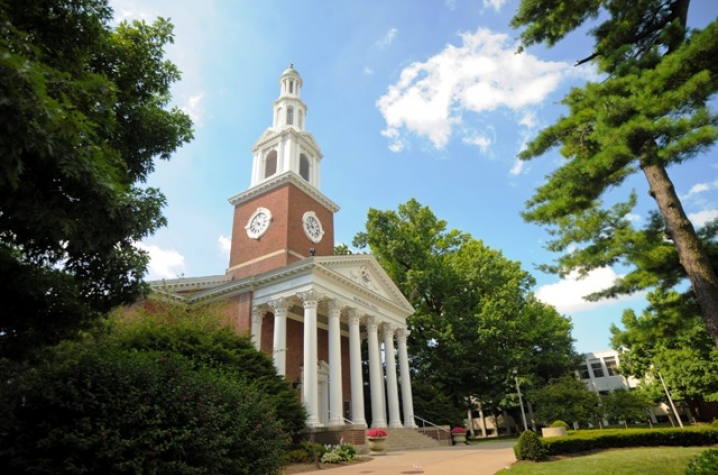 LEXINGTON, Ky. (April 22, 2010) - Each year the University of Kentucky pauses to recognize the achievements of its students at the annual University Honors and Recognition Awards Program. Hosted by the Office of Student Involvement, students were recognized with universitywide awards at a ceremony on Tuesday, April 20.

"The true measure of a great university is the great accomplishments of its students," Provost Kumble Subbaswamy said. "This evening is our chance to celebrate the Top 20-caliber student leaders that we have on this campus. I know you will all continue UK's legacy and make a difference in the world and their communities."

The evening culminated with the awarding of the Otis A. Singletary Outstanding Senior Award. Given to a senior man and woman, this award, named after the former UK president, was established in 1978 and was the first award recognizing overall student leadership at UK. Students nominated for this award have shown outstanding leadership while attending the University of Kentucky, made significant contributions to academics and are dedicated to service through campus and community involvement.

Benjamin Duncan, a senior from Columbus, Ohio, was named a finalist for the Singletary Award. A nominator called him, "everything that is good about college." He has been involved in many organizations on campus including Delta Tau Delta fraternity, Student Government and University Leadership Summit.

Corey Ballard, a senior from Huntington, W. Va., was named the 2010 male recipient of the Singletary Award. Ballard said even though his involvement in campus may have started a little later than others, that delay helped him focus in on dedicating himself to activities that he was truly passionate about. He served as the Student Activities Board president for the 2009-2010 academic year, a position that requires 20 to 30 hours a week and also maintained a full time job and a high GPA. He will continue his graduate work in communications at UK in the fall.

Jenna Brashear, a senior from Beaver Dam, was named a finalist for the Singletary Award. Brashear has been involved with the honors program and the Gaines Center for the Humanities. She also participates in SPUR (Society for the Promotion of Undergraduate Research) and was named a Chellgren Undergraduate Fellow. Brashear is an international studies and German major with a minor in music performance.

Kara A. Sutton, a senior from Elizabethtown, was named the 2010 female recipient of the Singletary Award. Sutton is a member of Kappa Kappa Gamma sorority and has been an integral part of the DanceBlue leadership team. This year she served as the campus marketing chair. She has also interned in U.S. Sen. Mitch McConnell's office and been a part of K Crew.

Alex H. Holl and Zachary D. Ruffing were awarded the Carol S. Adelstein Outstanding Student Award. The award, given by the Disability Resource Center, was first presented in 1984 and is annually presented to the student with a disability who best serves as an inspiration to the UK community through excellence in any or all of the following: academics, leadership, extracurricular activities and social and personal qualities. The award is named for Carol Adelstein who was a successful person with a disability and wife of a UK professor.

The Office of Residence Life honored several of their student staff. Erica Martin was named the recipient of the Robert A. Clay Resident Advisor Scholarship winner. The Robert A. Clay Scholarship is named for a former director of Residence Life and recognizes resident advisers who have outstanding job performance and have shown evidence of financial need with a $1,000 scholarship.

Five resident advisers were named recipients of the Rosemary Pond Leadership Award. Linzy M. Ball, Kelly Fuffy, Abbey Elkhus, Anne E. Greis and Matthew Longacre were all recognized for their dedication to service and leadership abilities. The award is named for Rosemary Pond who served as the dean of students at UK for over 20 years. Her leadership continues to have an impact on life in the residence halls even today. In her honor, the Rosemary Pond Leadership Award recognizes residence hall staff and hall government members who have consistently demonstrated exceptional leadership and have made significant contributions to the Office of Residence Life, particularly in the areas of programming, advising, student development or departmental operations.

UK's Student Government Association recognized five students and a staff member. Alexander Brewer received the Constitutional Scholarship. Corey Ballard and Lisa Marie Conley received Academic Excellence Scholarships. Elizabeth New was awarded the Lyman T. Johnson Odyssey Award. This award is bestowed each academic year on a student who has, by their actions, exemplified a high degree of personal integrity and a commitment to the betterment of the community or campus. New received a $1,500 academic stipend in both the fall and spring semesters of the following academic year. The award is in honor of Lyman T. Johnson, the first African-American student to be admitted to the University of Kentucky. James Coleman and Dorothy Edwards, a staff member in the UK VIP Center, were each awarded a Robert G. Zumwinkle Student Rights Award. The Zumwinkle Student Rights Award is bestowed on students, faculty and staff members who have done the most to promote and protect student rights on campus during each academic year. A $300 gift accompanies this award. The award is in honor of Robert Zumwinkle, former vice chancellor of Student Affairs.

The Division of Student Affairs and Office of Student Involvement honored students and staff. Student Mary Beth Johnson and Robert Theakston, assistant director of the Student Center - Cats Den, were both recognized with the Robert and Freda Carlin Unsung Hero Award. The award honors quiet leaders without whose contributions UK would not be the institution that it is today.

For the first time this year the Shane Carlin and Annie Sit Inclusion Awards were presented. The Shane Carlin and Annie Sit Inclusion Award recognizes the achievements of students that have made strides in assisting to move our campus forward. Carlin is a 1995 graduate of the University of Kentucky and has been a Student Affairs professional since that time.  While at UK, Shane was involved in many student organizations.  He and his wife want to celebrate and appreciate students who strive to make the University of Kentucky more inclusive. The Carlins developed this award to recognize students who work in social justice, diversity and inclusion in the most impacting and discerning manner, which transcends race. Hui Li and LaWanda E. McCants were selected as the Inclusion Award recipients.

The Office of Student Involvement also honored the Student Organization Advisor of the Year. Mark Kightlinger, a professor in the UK College of Law, serves as the adviser to OutLaw, an organization in the law school for the LGBT community.

The Honors Program bestowed four awards. Chad Lampl received the Raymond Betts Crystal Award for Service. This was first awarded in 1986 and is for outstanding service to the Honors Program and the university community at large. Laura Crawford, Riya Paranthan and Jessalyn Ubellacher all received the Diachun Awards. The Stephen Diachun Award, named after the first director of the Honors Program, has been presented since 1982 to a graduating senior who has “demonstrated outstanding research talent in the form of his/her Independent Project and who holds high promise for further professional development in graduate school.” The Diachun Award comes in the form of a check for $1,000 to be used for expenses in graduate or professional school.

2010 marks the 19th year the University of Kentucky recognizes the outstanding volunteer service achievements of Darrell A. VanMeter, through the presentation of an undergraduate award named in his honor. Darrell, a sophomore at the time of his death in 1991, was recognized by the university community and his home community for his positive contributions and his dedication to serving others. The impact of his "good samaritan" approach to helping others was apparent to faculty, staff, and students alike. Darrell A. VanMeter touched the campus community with his selfless heart and his continual acts of service. Service was not an isolated act for him. It was a way of being. Darrell's life had this special quality and a special impact.  This year's recipient was Samantha DeMartine.

Three major fellowships are also awarded at the recognition ceremony. Given by the Graduate School and UK Athletics, UK awards both the Otis A. Singletary Fellowship and Charles Wethington Fellowship. Matthew Longacre received the Singletary Fellowship. The Board of Directors of the University of Kentucky Athletic Association established quasi-endowment funds in memory of Otis A. Singletary and W. L. Matthews Jr. The funds provide fellowships of $12,000 to be awarded annually to UK graduating seniors who plan to continue their education in one of UK's graduate or professional programs. The fellowships are awarded for a first year of graduate or professional study at UK and are not renewable for subsequent years.

Laura Crawford and Brett Wolff each received a Wethington Fellowship. In honor of Charles T. Wethington Jr., president of the University of Kentucky from 1989 to 2001, the University and the Athletic Association annually provides funding for fellowships of $20,000 to be awarded to UK graduating seniors who plan to continue their education in one of the university’s graduate or professional programs. The fellowships are awarded for a first year of graduate or professional study at UK and are not renewable for subsequent years. Preference is given to Kentucky residents who are first-generation college students.

The University of Kentucky is proud of the accomplishments of all their outstanding students.

For a complete listing of awards, visit here.