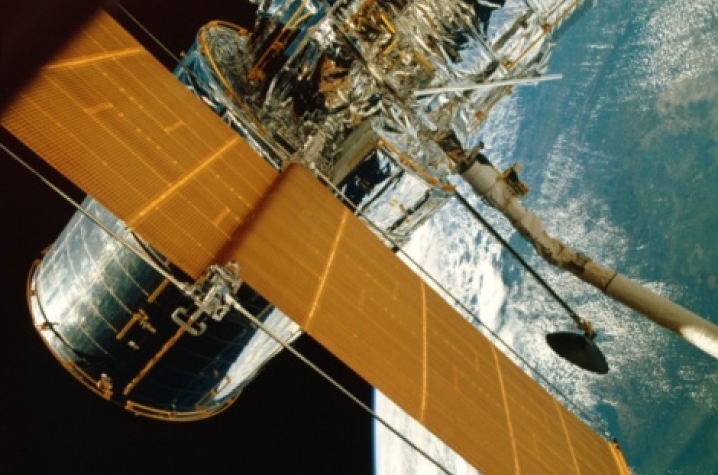 LEXINGTON, Ky. (February 10, 2010) - No scientific instrument has captured the imagination of the world like NASA's Hubble Space Telescope.

MacAdam Student Observatory Director Timothy Knauer and his crew of SkyTalkers are encouraging stargazers, young and old, to listen to the real yarn behind the legend in the cosmos.

This month's SkyTalk will include a chat by Aerospace Education Specialist Brandon Hargis of NASA's Langley Research Center. Hargis' lecture will begin at 7 p.m. Feb. 11 in Room 153 of the Chemistry-Physics Building on UK's campus.

Hargis will chronicle the history of the Hubble, in addition to highlighting the beloved scientific instrument's present-day condition and future plans through images of places, objects, and processes that humanity could once only dream about.

Hargis' lecture, titled "The Hubble Space Telescope: Scientific Breakthroughs and Breathtaking Images Topics," will include discussion on the age of the universe, super-massive black holes, as well as how and where planets and stars are born.

"All of our SkyTalk speakers are fascinating," explained Knauer, "but the Hubble has completely re-written entire chapters of astronomical knowledge."

According to NASA, the 1990 Hubble launch marked the most significant advance in astronomy since Galileo's telescope. The world's view of the universe has never been the same.

After Hargis' 45-minute talk, participants are invited to cross the street to the MacAdam Student Observatory, located on top of UK parking structure number two where everyone will have a chance to look through the 20-inch observatory telescope.

The Kentucky SkyTalk series is presented by the UK Department of Physics and Astronomy and the MacAdam Student Observatory. Held every second Thursday of the month, the talks are free and open to the public. Middle and high school students are particularly encouraged to attend.

The MacAdam Student Observatory hosts about 1,800 undergraduates each year that take Astronomy 191 and 192 at UK, according to Knauer, in addition to the approximate 1,000 people from the Lexington community who visit annually.

For more information contact Tim Knauer, observatory director, by e-mail at TimKnauer@uky.edu or (859) 257-7147.