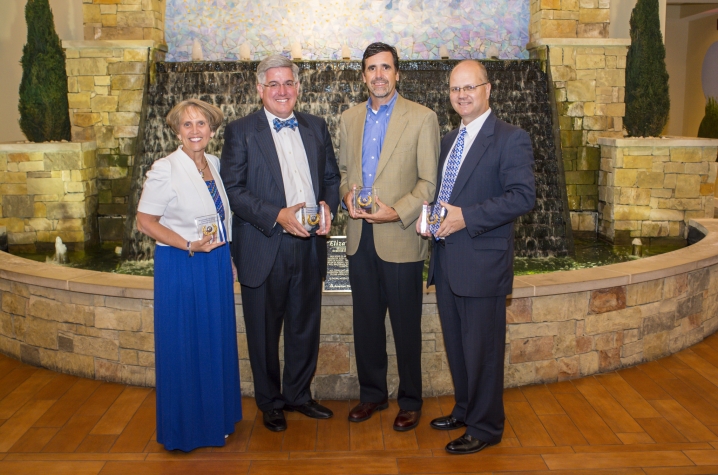 LEXINGTON, Ky. (June 30, 2014) — The University of Kentucky Alumni Association honored recipients of the 2014 Distinguished Service Awards during the UK Alumni Association Board of Directors Summer Workshop held June 20 in Lexington.

The awards are presented annually to honor and recognize those who have provided extraordinary service to the university and the association.

John Cain (1986, Business and Economics) is a Life Member of the UK Alumni Association and has served in several positions for the Northern Kentucky/Greater Cincinnati UK Alumni Club over the last 15 years, including on its board of directors, as an advisory council member and as president. During his time as president, the Northern Kentucky Club was named Large Club of the Year by the association. Over the period of his involvement, Cain has helped raise significant funding for the university, including $25,000 for the “Bucks for Brains” initiative. He worked to create a scholarship in the name of Tim Freudenburg in the amount of $2,500, which is presented annually to a qualifying student with an outstanding community service record. He has also spearheaded several other fundraising events. During his time at UK, Cain was active in many organizations, including the Sigma Pi fraternity, German Club, Student Government as student body president and with the UK Board of Trustees as a student representative. He is a UK Fellow and is greatly involved in his community, serving on several local boards and as a past chairman of the Northern Kentucky Chamber of Commerce, the Imark Group and the Southwest Ohio Chapter of Juvenile Diabetes Research Foundation. He is the president of Wiseway Supply and the co-founder of Alliance Business Lending. He and his wife, Carla, have four daughters, Addison, Hannah, Caroline and Mary Jacqueline.

Brooke Asbell (1986, Business and Economics) is a former member of the UK Alumni Association Board of Directors, having served two terms. He has also served on several committees during his time on the board, including chairman of Club Development, Scholarship and Great Teacher Committees, and as vice chairman of the Budget, Finance and Investments Committee. Additionally, Asbell is a Life Member and has served as president of the Dallas/Fort Worth UK Alumni Club. He has been instrumental in organizing the Dallas/Fort Worth UK Alumni Club Derby Party, which is one of the largest Derby parties put on by a UK Alumni Club.  In an effort to assist the university, Asbell has worked dilligently for student recruitment, having been involved with many college fairs and Student Send-offs. During his time at the university, he was a member of the Sigma Pi fraternity. Asbell is a partner with Asbell Development Group and has business development ventures in the Lexington Distillery District and in St. Petersburg, Russia. He has held multiple leadership positions at local and national levels. He and his wife, Laura, have two children, Samantha and Jake.

Chris Hopgood  (1984, Business and Economics; 1987, Law) is a UK Alumni Association Life Member and a member of the Wildcat Society. He has served several terms as the president of the Greater Henderson UK Alumni Club, which he has been heavily involved with for more than a decade. Hopgood is a past member of the association’s board of directors, serving as vice chairman of the Club Development Committee, vice chairman and chairman of the Membership Committee, and member of the Executive Committee and Budget, Finance and Investments Committee. As a student, Hopgood was a scholarship recipient and member of the Kentucky Law Review and Beta Gamma Sigma Honor Society. A resident of Henderson County, he has served as the past president of the Henderson County Bar Association and an attorney at Dorsey King Gray Norment and Hopgood.

Hopgood is also actively involved with youth programs and has been the coach of several basketball and baseball teams and is involved with Big Brothers Big Sisters of America. He is married to Lonna Watson Hopgood ’85 AFE and they have two children, Evan and Jesse.

Mary “Kekee” Szorcsik (1972, Business and Economics) is a Life Member of the UK Alumni Association, a member of the Wildcat Society and current member of the Naples/Fort Myers UK Alumni Club and the UK Alumni Association Board of Directors. She has served as the president of the Naples/Fort Myers UK Alumni Club­­­­ for two years and is a member of its local board of directors. She has chaired golf tournaments to raise scholarship funds and has served as a college fair representative. With the board of directors, Szorcsik has served on the Club Development, Communications, Executive, Diversity and Group Development Committees and as chairwoman and vice chairwoman of the Membership Committee. She is a UK Fellow and member of The Club at UK’s Spindletop Hall and the Women & Philanthropy Network. In her community, she has been active in collecting books to donate to a children’s cancer unit at the local hospital and is an active member of Philanthropic Educational Organization International, which aims to celebrate, educate and motivate women. She and her husband, Mitch Szorcsik’70 ’71 BE reside in Bonita Springs, Florida. They have three grown children, Joe, Scott and Brian, and five grandchildren.