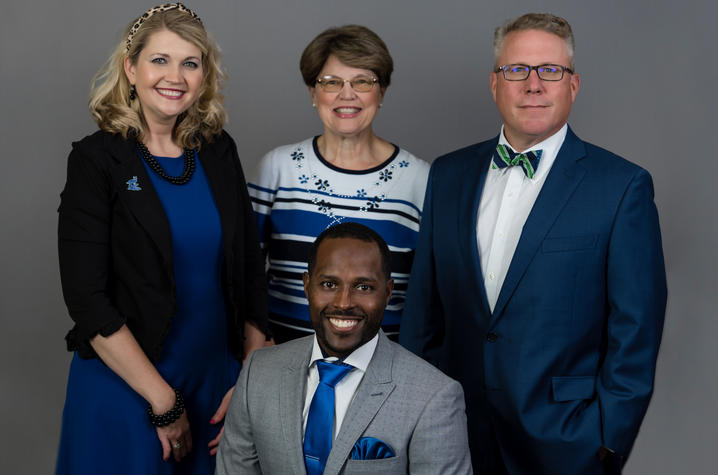 Antoine S. Huffman of Prosper, Texas, was elected president of the UK Alumni Association. He received his bachelor’s degree in telecommunications in 2005. While at Kentucky, he was a three-year starter for the Wildcats football team, becoming a UK NCAA record holder. He was also a member of the UK Athletic Association Board of Directors. He served three years as the Student-Athlete Advisory Committee president, two years as chairman for the UK Athletics Outreach Committee and was a member of the ODK National Leadership Honor Society. In 2005, Huffman became the first Black person to be crowned UK Homecoming king. He is active in the community with Habitat for Humanity, Boys and Girls Club, Salvation Army, and is a motivational speaker at local churches, schools and special regional events. In 2002 to 2005, the Atlanta, Georgia, native was nationally recognized for his community service, academics and athletic achievement. In addition, he was a finalist for the Wuerffel Trophy. He received the ARA Sportsmanship Award, two-time ESPN The Magazine Academic All-America, four-time NCAA Academic All-American, four-time SEC Academic honor-roll, and was a member of the Good Works Team. Huffman has served as chairman for the Membership, Communications, Club Development, Nominating for Board of Directors, Finance & Investments and Governance committees within the UK Alumni Association. He served two terms as president of the Greater Nashville UK Alumni Club and served as the association’s treasurer this past year. He is a past recipient of the Joseph T. Burch Young Alumni Award. He is in the medical field as senior director, regional sales for Mizuho OSI, and he and his wife, Jessica Kibbe Huffman, who is a UK College of Education graduate, are Life Members of the UK Alumni Association. They have two sons, Jayden and Adonis.

Janie C. McKenzie-Wells of Staffordsville, Kentucky, was elected president-elect of the UK Alumni Association. She graduated in 1983 from the UK College of Arts and Sciences with a bachelor’s degree in political science. She earned a law degree in 1986 from the UK J. David Rosenberg College of Law and competed on the UK National Moot Court Team. She was admitted to practice law in Kentucky in 1986 and has been admitted to practice before the U.S. Supreme Court, the 6th Circuit U.S. Court of Appeals and the U.S. District Courts for the Eastern and Western Districts of Kentucky. She is a certified general civil and family law mediator. She was also the first woman elected as 24th Circuit Family Court Judge. McKenzie-Wells is a member of the National Council of Juvenile and Family Court Judges and served as a delegate to the National Conference of State Trial Judges. She has served on the UK Alumni Association Board of Directors for several years as a representative from District VIII and the UK J. David Rosenberg College of Law and has been chairman and vice chairman of numerous committees. She is an active member and officer of the Big Sandy UK Alumni Club. McKenzie-Wells is a member of the UK Alumni Band and served as president and member of the UK Alumni Band Board. She received the 2006 UK Alumni Association Distinguished Service Award and the 2017 UK Law Alumni Association Distinguished Jurist Alumni Award. She is a member of UK Women & Philanthropy and served on the leadership council. She received the Boy Scouts of America 2013 Citizen of the Year Award in Johnson County, the SOAR 2014 Health Impact Award in the 5th Congressional District, and the 2017 Casey Family Programs Award. In 2016, she was inducted into the Paintsville High School Alumni Association Hall of Distinguished Alumni. She and her husband, Frank, have a daughter, Katherine Wells, M.D., a recent graduate of the UK College of Medicine.

Robert “Rob” Crady III of Louisville, Kentucky, was elected treasurer of the UK Alumni Association. He received a bachelor’s degree in economics from the University of Kentucky in 1993. During his time at UK, he served as a member of the Freshman Representative Council and various other positions with the Student Government Association. He was a member of Phi Kappa Tau fraternity. To further his financial education, Crady studied for and received the Certified Trust and Financial Advisor designation from the American Bankers Association. He began his career with Fifth Third Bank’s Trust Department in Lexington, later moving to Louisville to work in the Trust Departments of Stock Yards Bank and National City Bank before returning to Lexington to manage National City’s Lexington Trust Department. Crady is a director with RW Baird (formerly Hilliard Lyons) and a founding member of the Wealth & Family Office Group. He has served on the board of directors of the Bingham Child Guidance Center as president and treasurer and is currently on the Board of Directors of the Cabbage Patch Settlement House and Nativity Academy at St. Boniface. Crady serves on the Planned Giving Committee of the Center for Women and Families. He is married to Holly Harris Crady, a 1997 graduate from the Gatton College of Business, and they have two children, Robbie and Abby.

Jill H. Smith of Lexington, Kentucky, is secretary of the UK Alumni Association. She earned a bachelor’s degree in marketing and management from the University of Kentucky in 2005 and a master’s degree in career, technical and leadership education from the University of Kentucky in 2011. She began working at the UK Alumni Association in 2006 as a program coordinator and held four other positions at the association before becoming executive director in February 2020. She also serves as associate vice president for alumni engagement at UK and secretary of the UK Alumni Association Board of Directors. She has been an active volunteer with the Council for Advancement and Support of Education at both the state and district level. She is an advisor to the Delta Rho chapter of Delta Delta Delta, an active participant in Lexington area Tri-Delta alumni activities and is a Class of 2022 member of Leadership Kentucky. She is a Life Member of the UK Alumni Association, a UK Fellow and serves on several university committees. She and her husband, Ryan, who is a 2005 UK College of Agriculture, Food and Environment graduate, have two children, Tanner and Emmy.