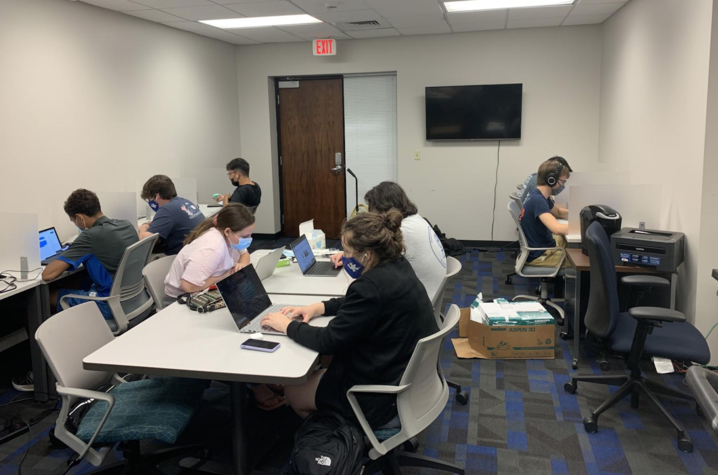 The policy team at their recent pre-season work retreat.

The policy team, led by coaches Casey Harrigan and Lincoln Garrett, returned to campus recently for their annual pre-season work retreat. Students researched and discussed the upcoming topic of the season — Resolved: The United States Federal Government should substantially increase prohibitions on anticompetitive business practices by the private sector by at least expanding the scope of its core antitrust laws.

In policy debate, teams of two spend months researching both sides of the given topic. Before the competition, opposing teams are assigned as the “affirmative” (in favor of the resolution) or the “negative” (opposed to the resolution). The team with the most impactful argument wins the round.

“This is an exciting time for the program with so many new initiatives. We’ve really embraced the value of promoting debate on and beyond our campus and hope to see a big impact over the coming season,” Debate Director Dave Arnett said.

The policy team will open their season virtually on Sept. 18, just a month before the debut of UK Debate’s newly established public forum team on Oct. 9.

Public forum is similar to policy debate, but it is more accessible and beginner-friendly with shorter rounds. UK is leading the way in the expansion of public forum debate as a founding member of the new Collegiate Public Forum League.

This year’s public forum team, under the leadership of Katie Humphries, is preparing for the upcoming topic of the season — Resolved: When in conflict, the United States' obligation to protect public health outweighs the preservation of individual freedom.

In addition to preparation for tournaments, UK Debate will continue to oversee the Bluegrass Debate Coalition. Director Bill Eddy and current UK debate students are sharing their resources with Kentucky middle and high students through after school classes, tournament opportunities and summer programs. Visit the BDC website at https://bluegrassdebate.org/.

The UK Debate Team is the 2019 National Debate Tournament champion and is housed in the College of Communication and Information at the University of Kentucky. Follow the team at https://ci.uky.edu/UKDebate/.