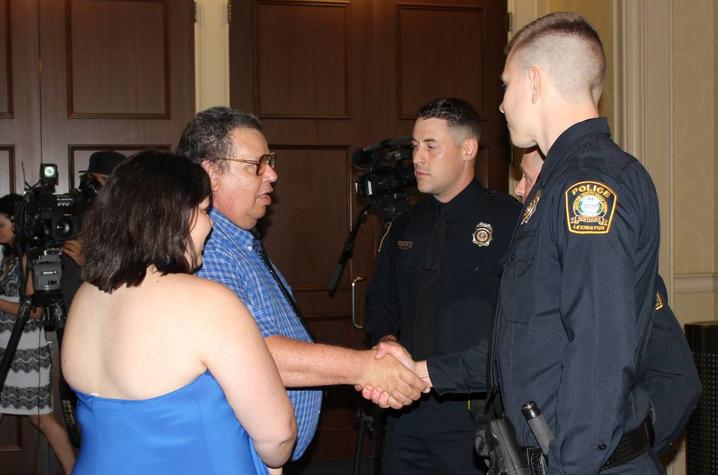 Mark Buede, with his daughter, being awarded a public service medal for his efforts. Photo provided.

LEXINGTON, Ky. (July 18, 2019) — No one expects to go to work on a normal day and leave a hero. However Mark Buede, a systems operator in University of Kentucky Information Technology Services, did just that.

Buede works a second job delivering pizzas for Papa John’s. On a routine delivery to a Lexington motel in November he noticed something suspicious. When the door opened, a man answered but there was an unclothed child lying on the bed behind him. Buede, having the gut feeling that something was wrong, immediately called 911.

After an investigation — as a result of the call — there was evidence indicating the man was abusing two girls, both identified as his daughters.

According to Lexington Police, Buede’s call is what led to the rescue of the two young girls in the room. Without his intervention the investigation would not have taken place and the abuse of the girls would not have been uncovered.

Buede, along with the three officers who investigated the case, were among those honored for their heroic acts by the Lexington Police Department recently. Buede was awarded a public service medal for his efforts.

“I appreciate being recognized and hope that anyone who sees something out of place will act on it," Buede said. "You never know how much reporting something might help.”