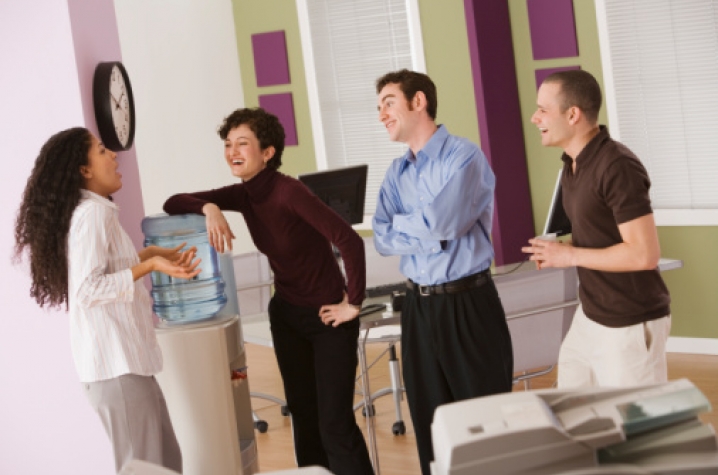 LEXINGTON, Ky. (Aug. 31, 2010) − So, you think people who gossip at work are a drain on that organization? Not so fast, say University of Kentucky Gatton College of Business and Economics researchers who make a case for the positive aspects of gossip in the workplace in the September issue of the Harvard Business Review.

Giuseppe "Joe" Labianca, Gatton Endowed Associate Professor of Management and part of Gatton's LINKS -- International Center for Research on Social Networks in Business, together with Gatton doctoral students in management, Travis Grosser and Ginny Kidwell-Lopez, examined the social interactions in a branch of a U.S. company and published their results in a research paper, portions of which are summarized in the article, "It's Not 'Unprofessional' to Gossip at Work."

Surveying 30 of the branch's 40 employees about their social networks in the office, the authors found the more staff members gossiped, the better the understanding of their social environment and the higher their peers rated their influence. However, those staff members were also given lower performance ratings by their supervisors, who tend to take a negative view of gossiping.

When asked to defend the findings of the research by him and his colleagues, Labianca said, "Gossip can be very helpful to people in organizations, especially when the flow of information from the top gets choked off, as often happens when companies are in crisis or undergoing change.   If a few people know what's really going on, gossip becomes the means of spreading that information to everyone else." Labianca added, "What's more, research shows that gossip often reduces individuals' anxiety and helps them cope with uncertainty."

Another finding of the study is that supervisors gossip with far more people than regular staffers do. "It can be a great diagnostic tool," said Grosser. "The manager who keeps an ear to the ground has a good chance to hear about potentially troublesome issues as they arise."

Popular wisdom may hold that people are more likely to undermine the company's values by gossiping. That's not what the researchers discovered. "A huge amount of gossip is devoted to praise," according to Kidwell-Lopez. "If someone stays late to help you, you'll probably tell someone else in your network about it. In fact, positive gossip is more typical than the negative kind."

So, gossiping is not necessarily unprofessional. "If I could take one word out of our lexicon, it would be 'unprofessional'," said Labianca.   "When managers warn us not to be unprofessional, they're really saying that when we show up for work, they expect us to leave behind the emotional and social parts of who we are. But we're unable to leave our humanity at the door."

Labianca, a recipient of the UK Alumni Association's Great Teacher Award earlier this year, has taught at UK since 2006.

For additional information on LINKS, go to www.linkscenter.org.