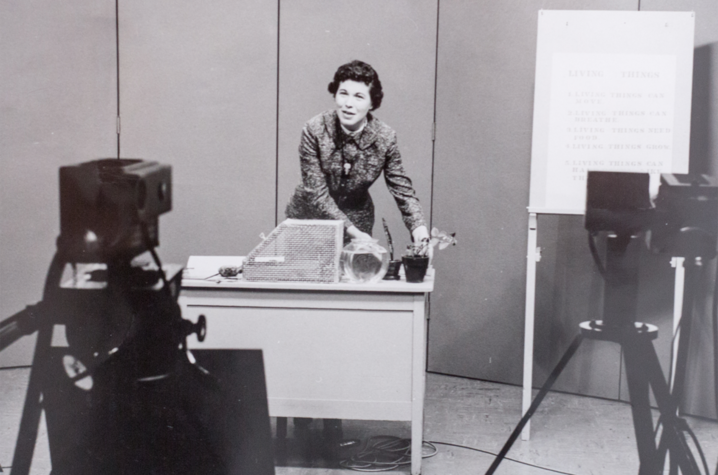 LEXINGTON, Ky. (May 15, 2020) — While video conferencing apps like Zoom and Google Meet are the talk of 2020, Kentucky students have been using technology to learn at home for 63 years. Wilma Howard Klein is the “grandmother” of distance education. The University of Kentucky College of Education alumna conducted the first instructional television program in the Commonwealth in 1957. Her role was to enrich classroom teachers’ curriculum.

“The show made it possible for students to see things they could not see unless they went on a field trip,” Klein said. “We could also conduct experiments that might be difficult to do in the classroom.”

Zoom may be the app of 2020, but television ruled during the 1950s. When the decade began, fewer than 20% of homes in America had a TV. By the time Klein’s broadcast hit the airwaves, millions of television sets had been sold. Almost 90% of Americans owned one by 1960.

Klein worked hard to get into classrooms as often as possible to see how students were reacting to the program and ensure her content was enriching. She thinks online learning can be successful, and said it is great that today’s teachers can get interaction immediately.

As Kentucky’s first “distance educator,” she shared some words of advice for teachers working with students online.

“It is imperative that teachers be totally familiar with the curriculum they are presenting,” she said. “Preparation is key here. Work is magnified with online teaching, and so it is doubly important to be prepared and ready for any question or problem that the students might present.”

For 18 years, Klein worked as a television instructor with Jefferson County Public Schools’ Channel 15. The telecast served Southern Indiana and counties around Louisville. She recorded the show initially at Louisville’s Hawthorne Elementary. The show was so successful it later moved into a new state-of-the-art building adjacent to the Jefferson County Schools administration building. While producing the pioneering telecast, Klein studied at the UK College of Education. She earned her bachelor’s degree in elementary education in 1953, and her master’s in 1960.

Klein served as an educator in Kentucky for 30 years, beginning in September of 1953 as a third grade teacher at Fairdale Elementary in Jefferson County. She retired in 1983 as principal of Beechwood Elementary in Fort Mitchell.

Klein has taught at the college level several times. In the 1960s, she spent summers as an adjunct professor at UK, assisting Ollie Bissmeyer in audio visual education. These classes were primarily for teachers who were already in the classroom to help them keep up with new technologies. After retirement, Klein and her husband moved to New Albany, Indiana, where Klein served as an adjunct professor at Southern Indiana University for several semesters.

Her pioneering efforts and commitment to education were recognized in 2017 when Klein was presented the Alumni Excellence Award and inducted into the UK College of Education’s Hall of Fame.

In 2014, Klein made a generous gift to the UK College of Education in memory of her late husband, Henry “Hank” Klein, and her parents, Rev. and Mrs. William Howard. It enabled the creation of creative spaces in the dean’s suite in Dickey Hall. Still dedicated to ensuring the success of students, Klein donates a scholarship annually. The Wilma Howard Klein Scholarship goes to a junior or senior at the UK College of Education who plans to teach after graduation.