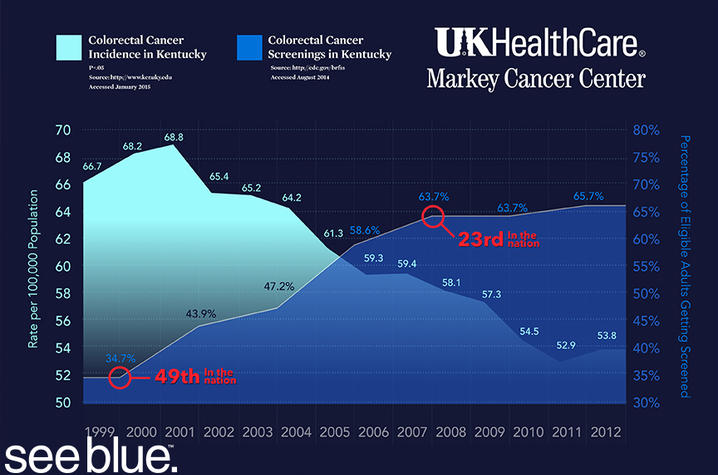 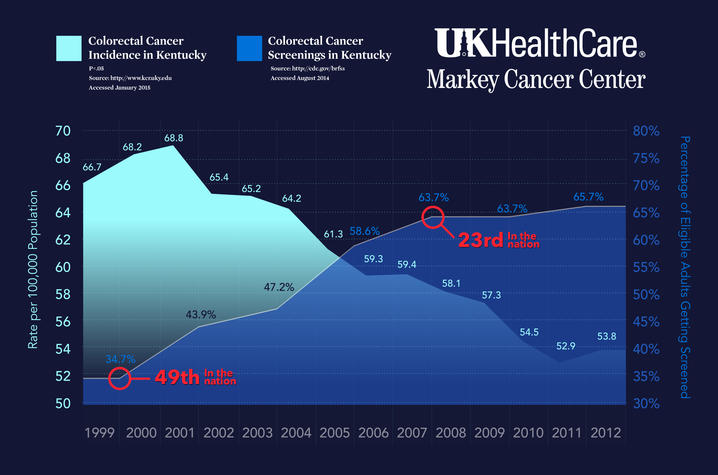 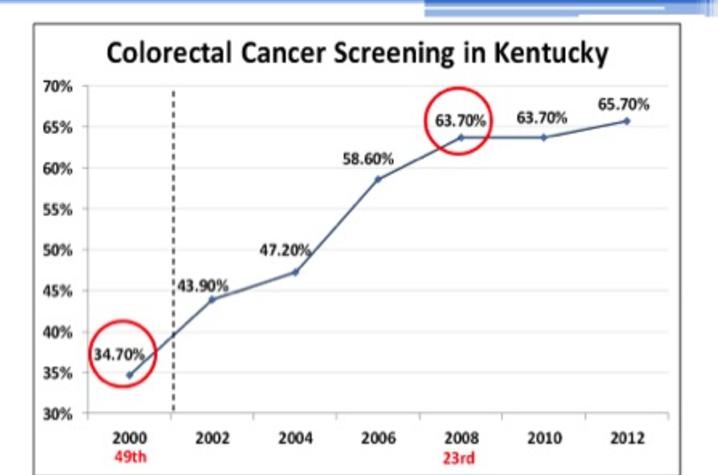 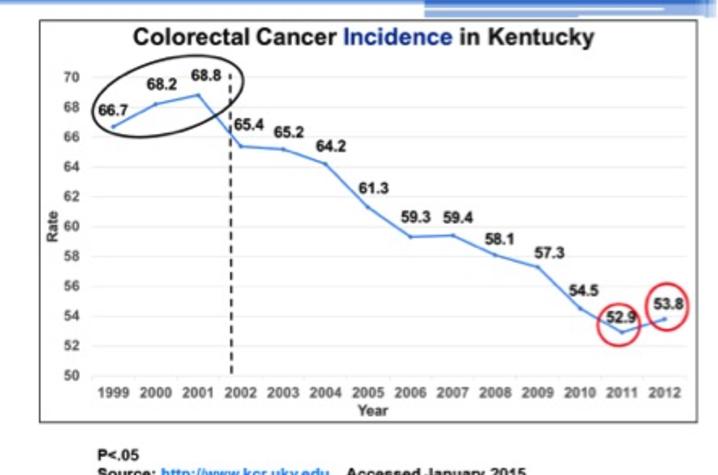 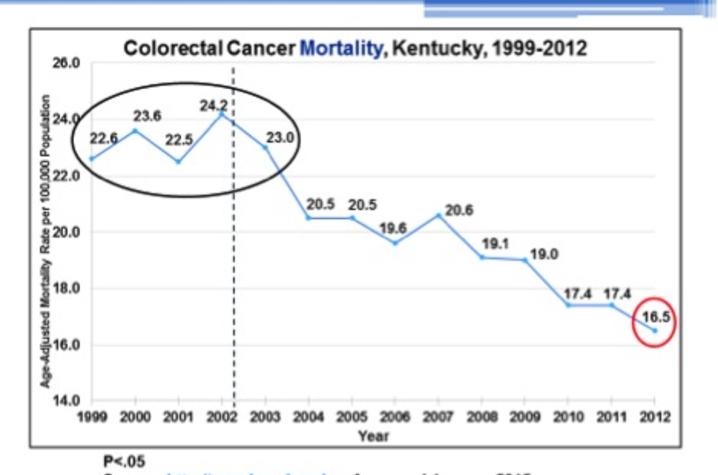 LEXINGTON, Ky. (March 16, 2016) ­– Fifteen years ago, Kentucky was ranked first in the nation for both the highest incidence and mortality rates for colorectal cancer. These statistics are made more dire by the fact that colorectal cancer is largely a preventable disease, thanks to regular colorectal screenings.

However, at that time, Kentucky was also ranked next-to-last in the country for colorectal cancer screenings, with just over one-third of people age 50 or over having ever received a sigmoidoscopy or colonoscopy exam.

These startling statistics spurred several major cancer groups in Kentucky into action, leading to the launch of a program encouraging primary care physicians to recommend and schedule colorectal screening. In rural areas of the state where access to primary care is limited, individuals from the community were recruited for screening and asked to encourage their age-eligible friends to also be screened.

The Kentucky Cancer Consortium (KCC) brings together more than 60 state agencies and organizations and is funded by Centers for Disease Control and Prevention through the University of Kentucky Markey Cancer Control Program. Working together the agencies and organizations participating in the KCC were able to introduce two successful policy initiatives: the first resulted in a bill passed by the state General Assembly that requires all health insurers in Kentucky to cover the cost of screening for age-eligible patients; the second resulted in a bill passed by state legislature to establish a program for screening age-eligible patients who are uninsured, and to educate the public about the importance of being screened for colorectal cancer.

In the seven years following this new focus on colorectal cancer, the screenings rates nearly doubled, from 34.7 percent of the age-eligible population receiving screenings to 63.7 percent. This raised Kentucky’s rank from 49th in the country to 23rd compared to other states. No other state has had such a dramatic increase in colorectal screenings in such a short period of time.

As a result, the lives of many Kentuckians have been saved: the incidence rate for colorectal cancer is down nearly 25 percent, and the mortality rate has dropped 30 percent. Through colorectal screenings, doctors can find precancerous lesions and remove them before they become cancer. Screenings also allow physicians to find these cancers at an earlier stages, when they are more likely to respond to treatment.

“A 25 percent reduction in colorectal cancer means that each year 230 Kentuckians who would have developed colorectal cancer in the past no longer get the disease," Tucker said. "This is a remarkable public health success story, and it demonstrates that when we work together and truly coordinate our efforts, we can make a meaningful difference.”

Though much progress has been made, there’s still a long way to go: roughly a third of eligible Kentuckians still aren’t seeking these life-saving screenings. Melissa Hounshell, the community outreach director for the UK Markey Cancer Center, is focusing her efforts on reaching these individuals by distributing FIT kits in the population centers where individuals are least likely to pursue screening. FIT kits are at-home tests that are then mailed to a lab and screened for blood in the stool, a potential marker of colorectal cancer.

“Markey is committed more than ever to leading a comprehensive cancer screening education and prevention program,” Hounshell said. “It’s about reaching some of those people who have been unreachable and really embedding ourselves in the community.”