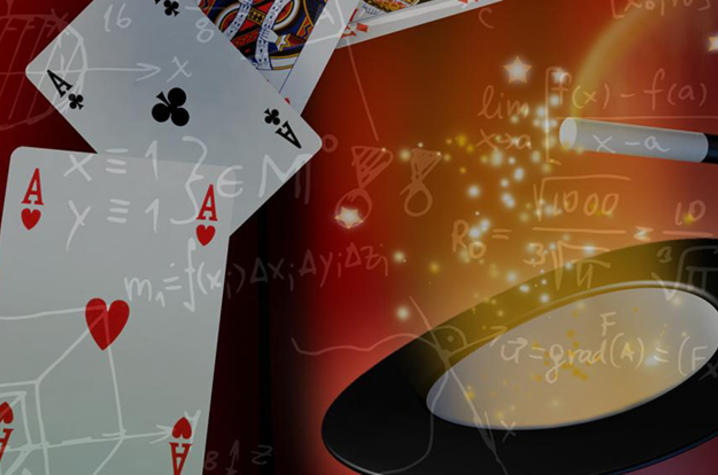 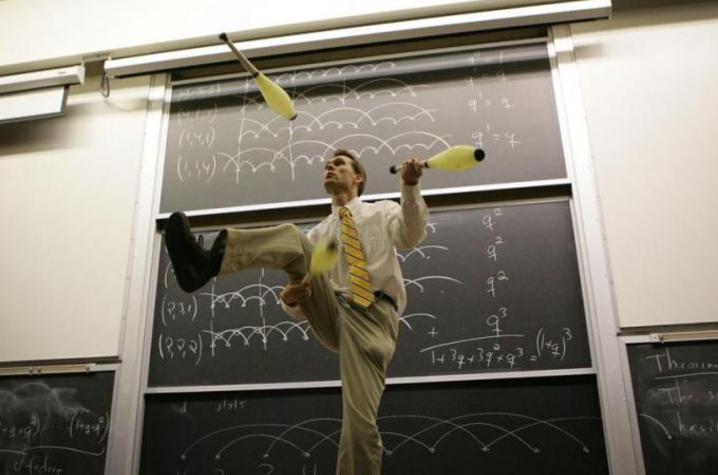 LEXINGTON, Ky. (May 25, 2016) — In organizing its spring 2016 information meeting for majors, the University of Kentucky Department of Mathematics solicited faculty to give the closing address. Professor Richard Ehrenborg volunteered, but suggested a less traditional approach.

Instead of giving a lecture on new developments in the field or solving complex equations on the chalkboard, Ehrenborg led volunteers and spectators through tricks involving playing cards and simple geometric shapes. In short order, he was able to predict a single card’s location in a shuffled deck and prove that 168 and 169 are actually equal to each other.

But these were no mere sleight of hand illusions — as Ehrenborg points out, these intriguingly simple tricks all demonstrate valuable mathematical principles. These efforts are also part of his larger goal to rebrand perceptions about math and address something he finds missing.

His philosophy is simple: math is fun.

“In English, they might study Shakespeare’s comedies because they’re more fun. In math, people have suffered through learning to add and multiply, to do their taxes, and if you’re an engineer you had to learn calculus. What’s missing is the fun part,” he said.

Ehrenborg’s research and scholarship focuses on the area of combinatorics, which deals with analyzing the properties of discrete structures. But he has also engaged in research projects and educational demonstrations on the mathematics of juggling — he is always looking for ways to bring math to the people.

“I like working with structures and counting things, but there is also a problem in sharing mathematics — people don’t have the ability to visualize it,” he explained. “People don’t remember formulas, they remember pictures. Math is not memorization.”

To combat this — or, as he puts it, to “do some good propaganda for mathematics” — Ehrenborg emphasizes shapes while in the classroom and continues building his repertoire of “magic” outside of it. He also partnered with the College of Arts and Sciences to record and share videos of his enthusiastic demonstrations.

This is all part of his ongoing effort to bring math to a wider audience.

“Math has to be visual, and I love the idea of show and tell. Even when I teach differential equations there are shapes. It’s important to do these visual things because that’s what people can really understand and get excited about.”

And if you still aren’t convinced, maybe you should see for yourself…

You can watch videos of Ehrenborg’s “math magic” tricks here:

As well as video of Ehrenborg’s juggling lecture here: