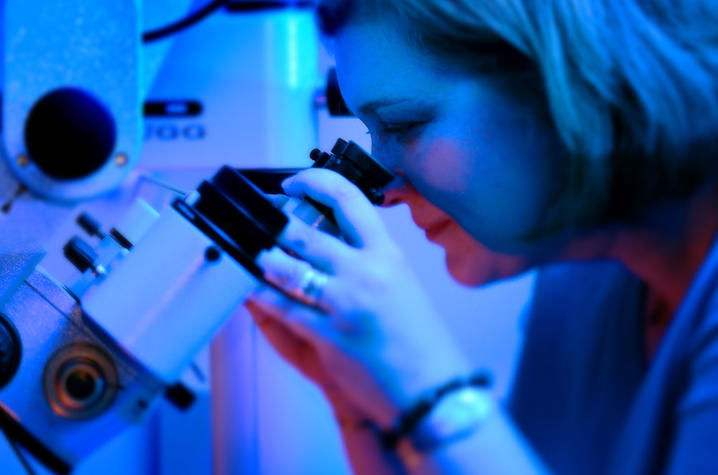 LEXINGTON, Ky. (Oct. 3, 2016) –  Because Alzheimer’s disease (AD) is the leading cause of dementia, many people use the two terms interchangeably. But inadequate blood flow to the brain due to microinfarcts, mini-strokes, or strokes is a hallmark of a disease called Vascular Cognitive Impairment and Dementia (VCID). VCID is the second most common cause of dementia, and the two are not mutually exclusive – researchers estimate that 40-60% of Alzheimer’s disease patients also have VCID.

A paper recently published in the Journal of Neuroscience by Donna Wilcock, PhD, of the University of Kentucky Sanders-Brown Center on Aging, reports that a certain form of immunotherapy targeted to Alzheimer's patients may be ineffective when that patient also has VCID.

"These findings are important in that they provide a possible explanation for why clinical trials of anti-Aβ immunotherapy for Alzheimer’s disease have been historically unsuccessful," Wilcock said.  "If up to 40 percent of people with Alzheimer's also have VCID, treatment candidates that target only the AD physiology won't be effective in those patients.  It's like treating only half the disease."

Most researchers agree that the formation of brain plaques containing amyloid β (Aβ) peptides is an initial step in the development of Alzheimer’s disease, which has led to a race to identify and test treatments that reduce the levels of these plaques. Anti-Aβ immunotherapy, which uses antibodies against A to clear it from the brain, has been a leading approach.

While these drugs showed promise in animal studies, clinical trials have failed to show similar benefits in human patients.

"There has been one failure after another in clinical trials, which has been really disheartening for the scientific community and for patients, Wilcock said. "My work might shed some early light on why they failed and eventually open the door for a combination treatment for VCID and AD."

Without a suitable animal model, testing this hypothesis would not have been possible. Fortunately, Wilcock and her research team had already developed an innovative model of combined AD and VCID. Using this mouse model, together with its parent model of AD without VCID, Wilcock evaluated the ability of an anti-Aβ antibody to enhance cognitive capabilities in both models. While Aβ levels were reduced in both groups, cognitive function was not improved in the groups with combined AD and VCID.

"The failure of anti-Aβ immunotherapy in the mixed AD-VCID model suggests that both disease processes have to be treated to have a successful outcome," Wilcock said. "The missing link has been that our animal models usually possess the hallmarks of only one disease, which has led to failure of successful translation to clinic."

By developing a model that more accurately reflects the brain changes we see in the human brain with dementia, we can better develop our treatment approaches and increase our chances of successful translation. Our next step is to add a treatment for VCID on top of the Aβ immunotherapy to try to overcome the inability to produce a meaningful improvement in learning and memory."

Research reported in this publication was supported by the National Institute of Neurological Disorders and Stroke of the National Institutes of Health under award numbers F31NS092202 and 1RO1NS079637.  This content is solely the responsibility of the authors and does not necessarily represent the official views of the NIH.