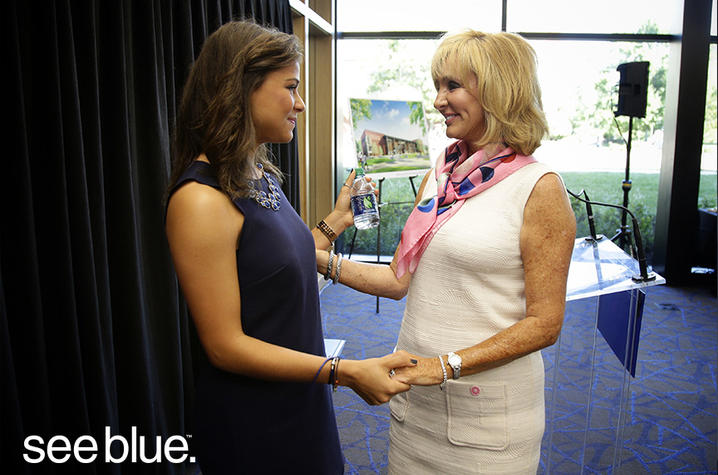 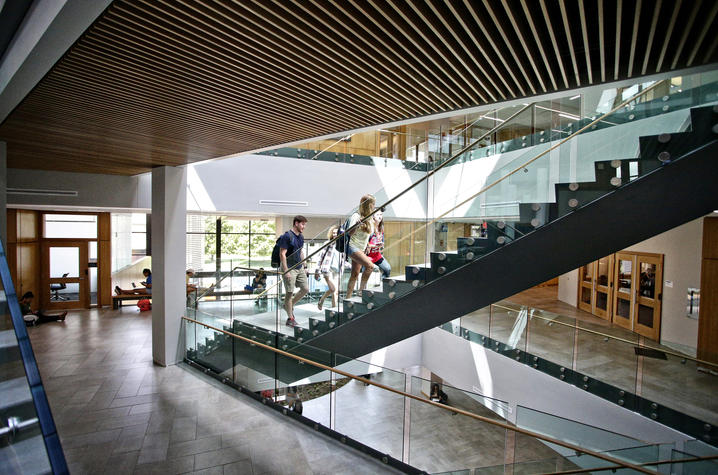 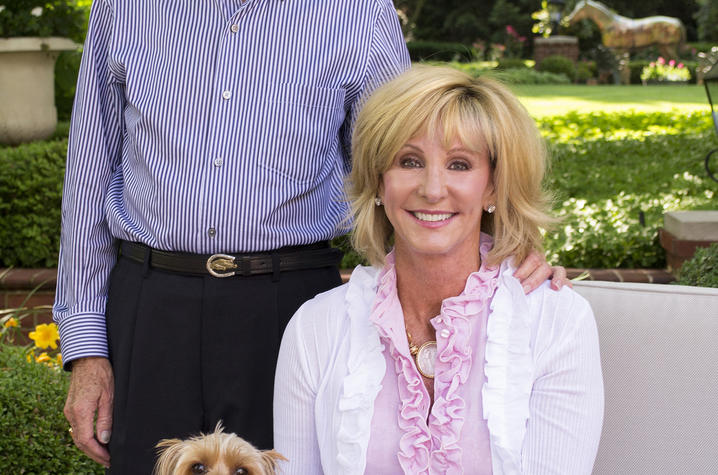 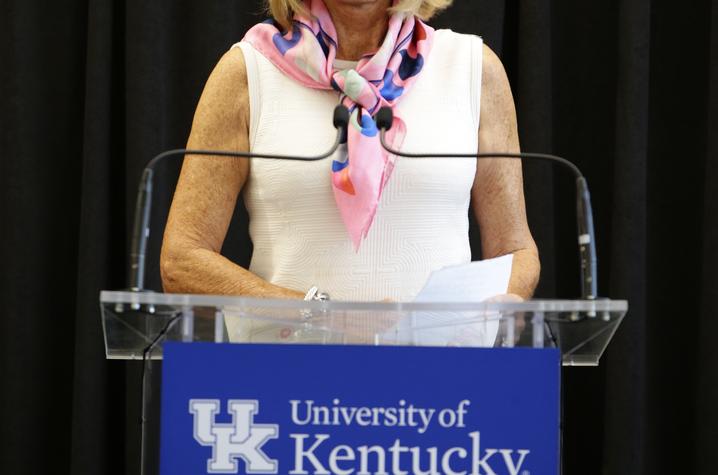 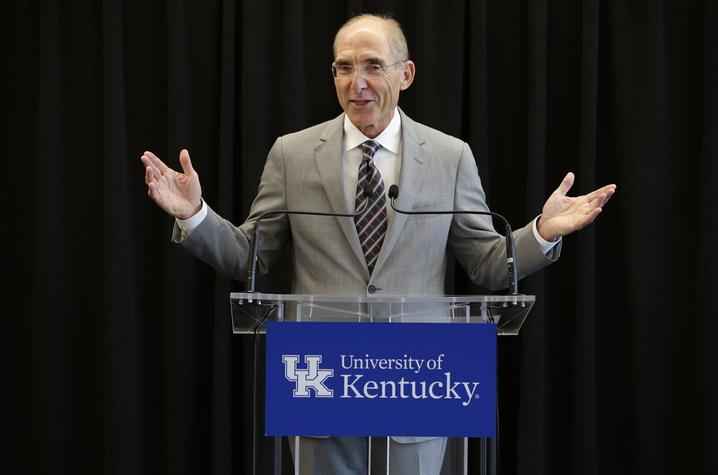 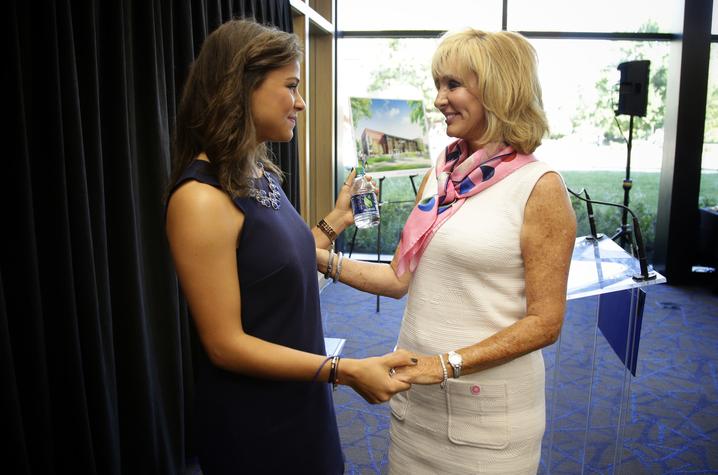 The majority of the gift — $8 million — will go toward the new academic science building that now takes the name Don & Cathy Jacobs Science Building. Another $2 million will fund future academic and research investments yet to be determined.

The legacy of Lexington businessman and philanthropist Don Jacobs and his wife Cathy already lives on across the UK campus — from business education to health care. And now, that same legacy will impact thousands of UK students, who are projected to use the new science building annually.

Don and Cathy Jacobs have now donated funds in excess of $20 million to UK in areas ranging from science and health to the Gatton College of Business and Economics. The couple established the Don and Cathy Jacobs Executive Education Center at the Gatton College of Business and Economics. The center serves as a university resource to expand executive education and leadership development in small businesses and nonprofit organizations. The Jacobs also established the Health Education Center at the UK Albert B. Chandler Hospital. The facility serves as a central resource to help patients, families and caregivers research their medical questions and provides other services and outreach.

In addition, the Jacobs have been major supporters of UK's Markey Cancer Center and the UK College of Medicine.

Don Jacobs' philanthropy, leadership and service was recognized by UK in 2014 as he was awarded an honorary doctor of humanities degree during Commencement ceremonies.

“This gift extends a legacy of philanthropy to the University of Kentucky. Collectively, Don and Cathy Jacobs have contributed their support in excess of $20 million to UK,” said President Eli Capilouto. “This announcement is not only about today. It’s not about bricks and mortar. It’s about the faculty, staff and students empowered by the gift we have been given by Don and Cathy Jacobs.”

The Don & Cathy Jacobs Science Building will transform science education at UK, preparing the next generation of researchers, doctors, teachers and more with early experimentation and engaged learning, Capilouto said.

It is part of a more than $2.1 billion campus transformation initiated in the last five years and includes classrooms, research space, residence halls, dining and athletics facilities. More than 90 percent of that transformation is being financed with university resources or private giving.

"The breadth of this campus — from our business college to those in need in our hospital and now students, faculty and researchers in the heart of our campus — will reap the rewards of what Don and Cathy Jacobs have sown," said C.B. Akins Sr., vice chair of the UK Board of Trustees. "This facility is a testament to learning and research, and it also speaks to the power of partnership, with the gift we are recognizing today further leveraging the impact of the $65 million contribution (UK) Athletics is making toward this incredible educational facility."

The 240,000-square-foot building opened this fall on the corner of Rose Street and Huguelet Drive and is home to the largest active learning space on campus. But students are not only learning — they're experiencing science. State-of-the-art laboratories, advanced lecture halls, technology enabled active learning (TEAL) classrooms, outdoor teaching spaces and interior green space emphasize science you can see.

The Jacobs have long invested in students and patients at UK, and in a wide variety of organizations across Central Kentucky, including the Hope Center in Lexington, which serves the homeless, and Lexington’s Sayre School, where they established a financial literacy seminar series.

"Don and I always believed that to whom much is given, much is required," Cathy Jacobs said. "I am grateful that we have been blessed so that we can help others."

“In recent years, Don and Cathy Jacobs have made major gifts to Lexington nonprofit agencies to improve the lives of countless individuals in the Bluegrass,” said Mike Richey, UK vice president for philanthropy. “And through their extraordinary generosity to multiple areas of the University of Kentucky, they are making an impact on the Commonwealth. This most recent commitment from The Don Jacobs Sr. Charitable Foundation to the university is yet one more shining example of Don and Cathy Jacobs' philanthropic leadership and support of science education and research. Both undergird UK’s commitment to our students’ academic success and for that, we are deeply grateful.”

Growing up as the son of a general store owner in Bennettsville, South Carolina, Jacobs, who passed away April 15, 2015, would become a very successful automobile dealer and entrepreneur. He learned the importance of providing excellent customer service at an early age.

Jacobs pursued an opportunity to sell cars at a Ford dealership in Nashville, Tennessee. He eventually became the No. 1 retail salesperson of automobiles in the entire U.S. for two years running. He followed that by becoming sales manager at a Chevrolet dealership in Nashville, where he developed an employee training manual which stressed quality, integrity and dependability in business dealings.

Jacobs then applied to General Motors to acquire his own dealership, and was offered an Oldsmobile franchise in Lexington.

From opening at its original location on High Street in downtown Lexington in 1970, Don Jacobs Oldsmobile expanded to a 19-acre site at Nicholasville and New Circle

Roads in 1974. Through the years, Jacobs added Honda, Volkswagen and BMW to his lineup of new car offerings, while simultaneously opening dealerships in other markets in Kentucky, Tennessee and Florida.

And he did not stop at selling and servicing cars. Jacobs co-founded Dealers' Financial Services and later established the Military Installment Loan and Education System program to assist military personnel with their automobile financing needs.

Cathy Jacobs is also an accomplished entrepreneur, having founded and operated a successful advertising agency for many years. After its sale, she and her husband focused attention on their community-minded philanthropy.