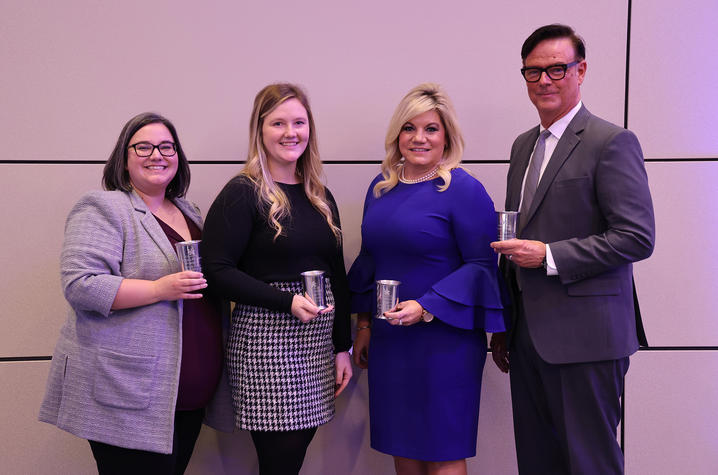 LEXINGTON, Ky. (Dec. 9. 2022) — On Tuesday, Dec. 6, the University of Kentucky Office of Philanthropy and Alumni Engagement honored five UK employees at the 2022 Terry B. Mobley Philanthropy Awards ceremony. Held in the Gatton Student Center, the Mobley Awards honor Terry Mobley's distinguished advancement career by rewarding staff members and volunteers who have made substantial, impactful contributions to the university’s philanthropic mission.

Each Mobley Award recipient receives a commemorative julep cup, a stipend and recognition on the plaque of award winners in the Sturgill Philanthropy Building. This year’s award winners include:

The Front Line Award is presented to a UK Philanthropy, UK Alumni Association or other support staff member to recognize outstanding performance in support of philanthropy efforts at the university.

The Philanthropy Service Award is presented to a UK senior professional, administrator, faculty member or volunteer who has demonstrated extraordinary support for the philanthropy effort at the university, is a strong advocate for philanthropy and is not a full-time UK Philanthropy or UK Alumni Association professional.

New in 2022, the Impact Award is presented annually to a staff member whose efforts during the calendar year led to a momentous, positive, lasting change at the university.

Terry Mobley graduated from UK in 1965, went to work for IBM in Lexington, then returned to UK in 1977 and served as chief development officer, tasked with recruiting a staff that would fundraise for the university. The previous year, UK had raised $1.6 million. Mobley set his sights higher for his beloved alma mater.

While eating lunch with then-President Lee Todd, Mobley said he planned to launch a $1 billion campaign. Mobley remembered President Todd “nearly falling out of his chair” at the idea. Mobley recruited a first-rate team of fundraisers and support staff. As a result, Mobley achieved his goal of raising $1 billion.

For his work at UK and his service on countless boards, including a stint on the UK Board of Trustees, Mobley became known as the master of creating relationships. Whether it was at home, on the basketball court or at the office, Mobley valued three traits above all else: integrity, credibility and honesty. He took great pride in all he accomplished at UK — the relationships he built with his colleagues and the pathway he paved for the future of philanthropy at the University of Kentucky.