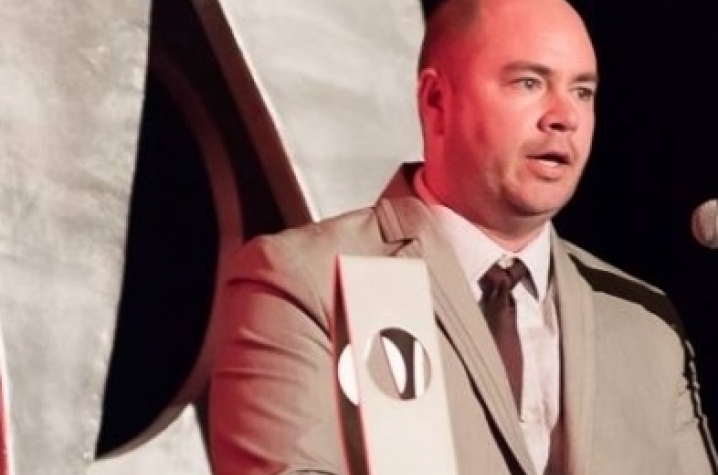 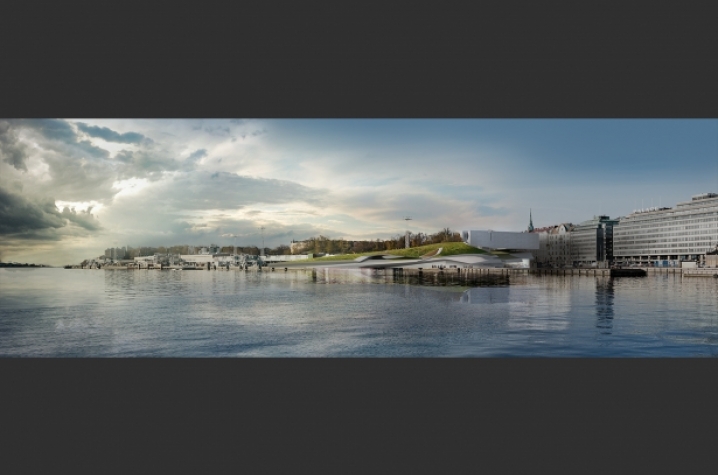 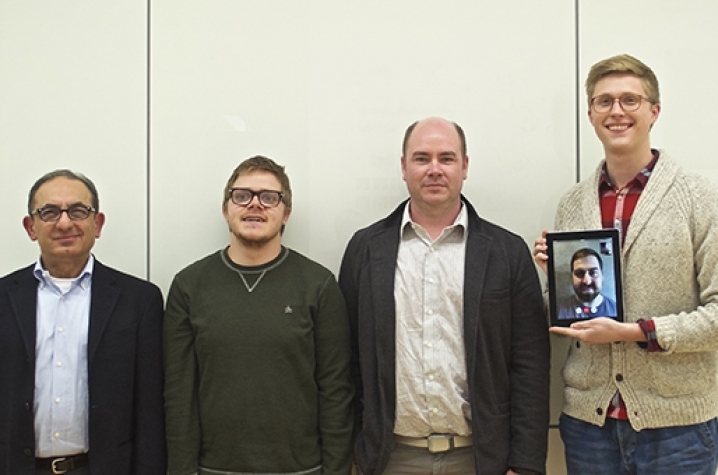 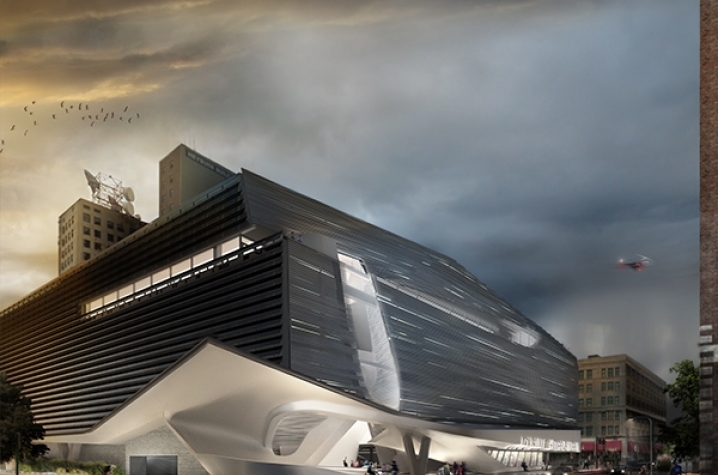 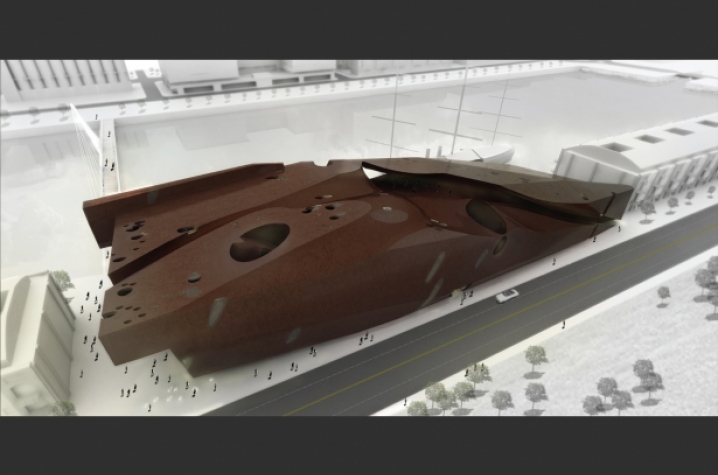 LEXINGTON, Ky. (Sept. 25, 2015) — University of Kentucky College of Design Assistant Professor of Architecture Martin Summers and his practice, PLUS-SUM Studio, received five International Design Awards (IDA) this summer. In addition, one of the award winners, the Guggenheim Helsinki Project, took home the honor of Architectural Project of The Year '14 in the competition's professional category.

Summers was surprised when they informed him of the win days before it was announced, and then astonished to realize later, in fact, the work had won five awards. "When I realized PLUS-SUM won four category awards and that each project submitted received recognition, I was a bit overwhelmed. I went to their website again a few days later and realized that the top prize was awarded to the Guggenheim Helsinki project, which was separate from the other award listings. It is a great honor to have my work recognized among such an amazing group of talented peers and to be selected as the best among that group."

The annual IDA competition recognizes, honors and promotes legendary design visionaries and uncovers emerging talents in architecture, interior, product, graphic and fashion design on a global level. This year the IDA honorary juries examined more than 1,000 entries submitted by architects and designers from 52 countries around the world. After final decisions were made, the jury rewarded the best professional and emerging designers for achievements in terms of design, creativity, usability and innovation.

A handful of designers, thinkers and entrepreneurs created IDA in 2007 as a response to the lack of recognition and celebration for smart and sustainable multidisciplinary design. Judging for the IDA awards was a rigorous process, with winners receiving publication of their work in the "International Design Awards Book of Designs." A coveted IDA trophy was also awarded to all Designer of the Year title winners at the official biennial IDA Ceremony. As the Architectural Designer of the Year for 2014, Summers was invited to an awards ceremony at the Harmony Gold Theater in Hollywood, California, where in addition to accepting his trophy, he gave a brief statement on his work.

Summers received the Architectural Designer of the Year Award and the gold or first place honor in the Urban Design subcategory of Architecture Awards for the Guggenheim Helsinki project. This proposal supplants the object/icon building with a strategy that redefines Helsinki as an urbanized landscape; the museum embedded in its context and in the rich, Finnish culture. Urbanistically, the museum's strata develop a dynamic experience of movement through the site while light appears to organize and sculpt the interior.

Strategically the building integrates with and accentuates its context drawing out the site's unique qualities. The northern edge forms a permeable threshold at the scale of the adjacent historic buildings giving definition to a future pedestrian district. From the west and south, the ground plane rises to link the roof with Tähtitornin vuori park, conceptually extending the park to the water's edge. Regionally the project connects to Helsinki’s “green fingers” blending the new park with this extended archipelago. At a national scale it evokes the Finnish ethos, manifesting the emotional connection to the natural landscape bathed in a sublime light.

Summers and PLUS-SUM received two honors for the "Grey-Matter" | Louisville Children's Museum project, taking silver or second place in the Urban Design subcategory and bronze or third place in the Conceptual subcategory of the Architecture Awards. Capitalizing on the naturally curious nature of children who seek opportunities to playfully explore the wondrous world, the project seeks to engage the minds' potential via an innovative architectural expression that activates the senses, ignites imagination, and heightens anticipation of new discoveries yet to be revealed.

Using the competition's urban campus goals while acknowledging the park system by Fredrick Law Olmstead that is a treasure and point of pride for Louisville’s citizens, the proposal attempts to stich together public space in its context to produce an intensified experience. Vehicular and pedestrian traffic were separated on the campus, connecting the parking garage and high tech office incubator building through the park, which becomes an extension of the museum and a main entrance to the building. The design leverages internal and external environments to reveal the urban context as an extension of the museum, blurring its boundaries to encourage children to see the city as a space of wonder and exploration.

The final award Summers' studio took was a bronze or third place award in the Architecture - Urban Design subcategory for "nMAC" | ACCA Competition. Cognizant that museums of contemporary art enjoy a particularly elevated status in culture by embodying aspirations to shape and evolve culture, this project uses a systemic logic to develop a dual museum; the new Museum of Contemporary Art (nMAC - Nuevo Museo de Arte Contemporáneo) housing the majority of highly curated, inwardly focused galleries and a second museum the new Museum of Arts and Culture (nMAC – Nuevo Museo de Artes y Cultura) in Buenos Aires. The second museum erodes the institutional edges both conceptually and formally providing a space into which the culture of the city can flow and from which the city becomes a new canvas for exploration and interpretation.

To learn more about these winning proposals, visit www.plus-sum.com.

PLUS-SUM Studio has engaged in several International Ideas Competitions since its founding in 2012 and utilizes iterative design strategies that Summers researches and teaches in the UK College of Design's School of Architecture. In addition to his projects' connection to his research and lessons, each project was executed by Summers and one or two of his UK students.

In contemporary architectural education, students use digital tools to produce what tend to be superficial models or visual representations of a built work; however in practice the digital model produces the constructed reality and Summers' students benefit from participating in these real world professional studio experiences.

"I challenge my students to make intelligent and rapid decisions, within a digital workflow, to simulate contemporary professional practice freed from certain realities. It is difficult to comprehend in a single semester-long studio, so the students who work with me at PLUS-SUM get to see the process practiced at another level, which drives home the reality that they too can do this. Several former students have noted how well prepared they are to step into offices at the highest levels of the profession based on the work we did together."